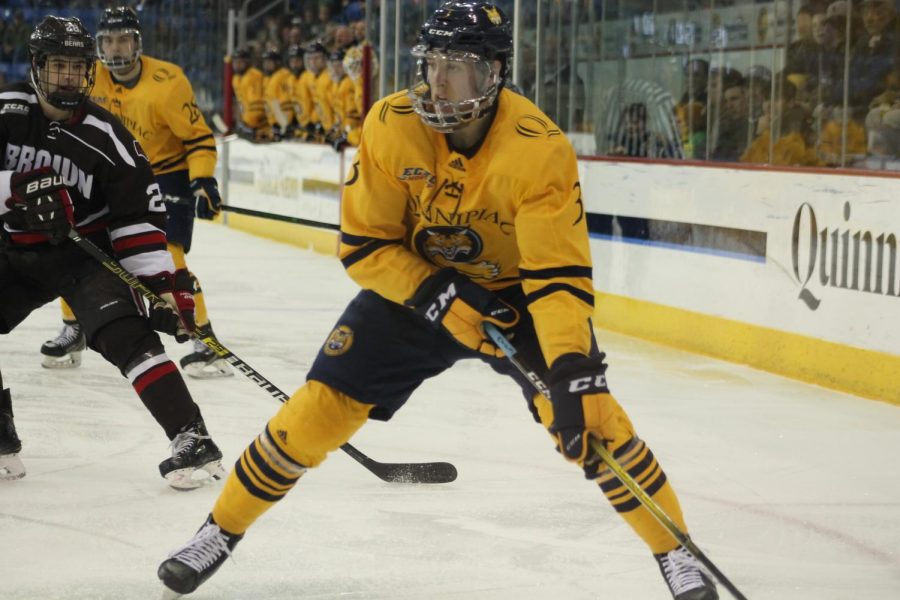 With the playoffs looming, Quinnipiac men’s ice hockey has clinched a first-round bye in the ECAC Hockey playoffs.

The Bobcats struck first, with the goal scored at the 9:42 mark in the first period. Sophomore forward Wyatt Bongiovanni set himself up in front of the net,screening Brown senior goaltender Gavin Nieto. Quinnipiac junior forward Odeen Tufto then fired a shot toward Bongiovanni’s stick which redirected the puck into the back of the net.

The next nine minutes were busy for the two netminders, as the teams combined for 17 shots — Quinnipiac led 11-6 in the category.

Shortly into the second period, Brown answered Quinnipiac with a goal of its own. Brown senior forward Brent Beaudoin slid the puck past the Quinnipiac defense to senior forward Trey Dodd who found junior forward Joachim Weberg for his second goal of the season knotting the game at one apiece

A hot start to the period via the goal didn’t lead to additional goals scored in the second. A frenzy of shots, however, did ensue. Quinnipiac fired 16 to Brown’s eight, combining for 24 in the period.

“Brown did a good job of blocking shots and our (defenders) were doing a good job getting there,” Quinnipiac head coach Rand Pecknold said. “Our forwards weren’t creating any traffic … we got to get bodies in front of the (goalkeeper).”

Even with the array of shots, the score was still tied 1-1. Shots became more scarce in the third period, as both sides eyed two points in the standings.

With 5:47 remaining in the final period, sophomore forward Ethan de Jong broke the tie. Sophomore forward William Fällström deeked out a Brown defender en route to the net. He backhanded the puck toward the net, and de Jong poked the puck past the goaltender.

“(Fällström) has had a great last six, seven, eight weeks,” Pecknold said. “He’s been one of our best players probably since Christmas.”

Despite securing the first-round bye, Quinnipiac’s regular season is not over yet. It plays arguably its biggest game of the year against rival Yale (13-13-2 overall, 10-9-2 ECAC Hockey) tomorrow, Saturday, Feb. 29, at the People’s United Center.

Quinnipiac is 23-7-5 all-time against Yale and has won 10 of its last 11 against the Bulldogs.

“Now, we have the bye for sure,” Fällström said. “Playing Yale tomorrow is going to be a lot of fun. (We’ll) try to build off it and have a week off and then get ready for playoffs.”