‘On the Rocks’ opens on York Hill 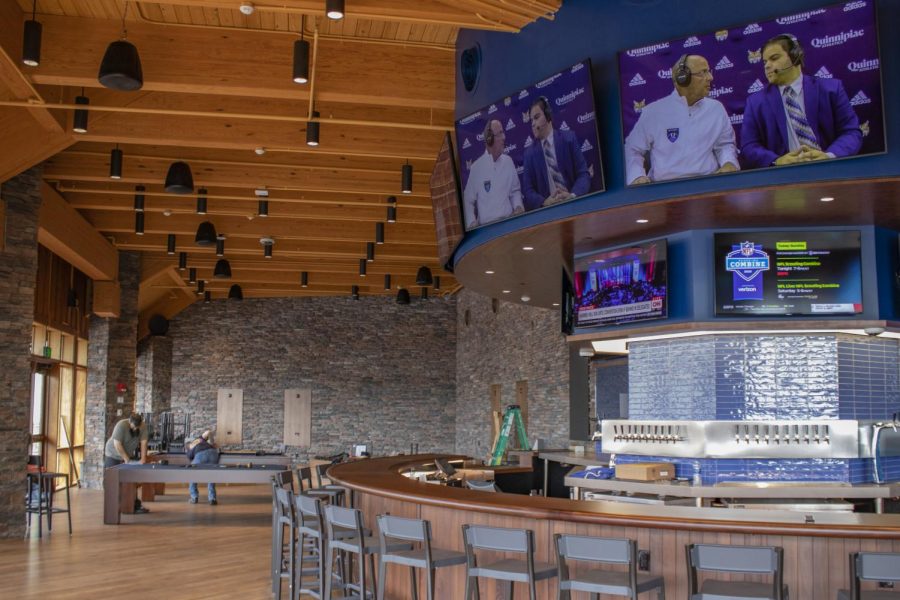 'On the Rocks' will feature 17 events this spring before set hours of operation will begin in the fall.

After months of anticipation, Quinnipiac’s pub is opening to the public on Saturday, Feb. 29, after Friday’s ribbon-cutting ceremony in the Rocky Top Student Center.

On the Rocks will not have set hours until the fall 2020 semester. Instead, there will be a total of 17 events throughout the remainder of the spring semester. These events include a wine and beer tasting, a comedy show, a performance by a cover band, trivia night, a unique exercise experience that incorporates spin in the York Hill fitness center and the bar called “Bikes and Brews” and a senior night for the class of 2020. 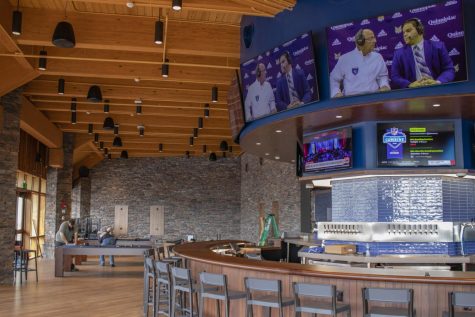 Connor Lawless‘On the Rocks’ will feature 17 events this spring before set hours of operation will begin in the fall.

“I think Rocky Top provides this great space for (the pub),” said Erin Provistalis, director of campus life and student involvement. “It’s on the campus where we traditionally house upperclassmen anyway, and there was space within the building to do it. So, it was kind of almost the perfect storm. A lot of great pieces came together.”

On the Rocks won’t be serving hard liquor, however it’ll have various other drink options. The pub is serving beer from local breweries Two Roads and Stony Creek at $4.50 per pint and Bud Light for $3. Angry Orchard and Wallingford Blue Hills Orchard Storm Along hard ciders will also be available for $6, along with White Claws and Budlight Seltzer for the same price. The price of wine will range from $6 to $8. The pub will feature different craft beers and other drinks throughout the course of the semester.

Accompanying the range of beverage options are “bar bites” such as pretzels for $6, an 18-piece plate of wings for $18 and $7 nachos with individual add-ons such as chicken, steak, guacamole and sour cream. The menu also consists of quesadillas, a chicken sandwich, loaded tater tots, sliders and salads. Students can purchase food with their meal plan, while drinks can be purchased with only cash or credit.

Along with the various food and drink options, the pub will feature farm tables, wooden booths and a stage for live performances. The pub is also outfitted with 16 TVs to be used for a multitude of events such as a viewing party for the Final Four games or the season finale of “The Bachelor,” according to Provistalis.

“I want it to feel really sort of laid back,” Provistalis said. “A place where you can come and like have a drink or two and a burger with your friend and hang out. And you can have a conversation and be a part of trivia if that’s what’s going on.”

The idea for a pub was in the initial concept of Rocky Top but was not included when the space first opened. The concept came to fruition after the 2019 senior class cabinet of the Student Government Association (SGA) made a large push, organizing two successful trial runs of a pub night.

“We really want it to be a place where folks can come together and have a real community feel,” Provistalis said.

Students can follow @ontherocksqu on Instagram to keep up with the latest news and events at the pub. Those looking for work-study jobs can apply for a position at the pub by contacting Provistalis at [email protected]