At the plate: Against all odds

Quinnipiac softball looks to climb the MAAC standings in 2020 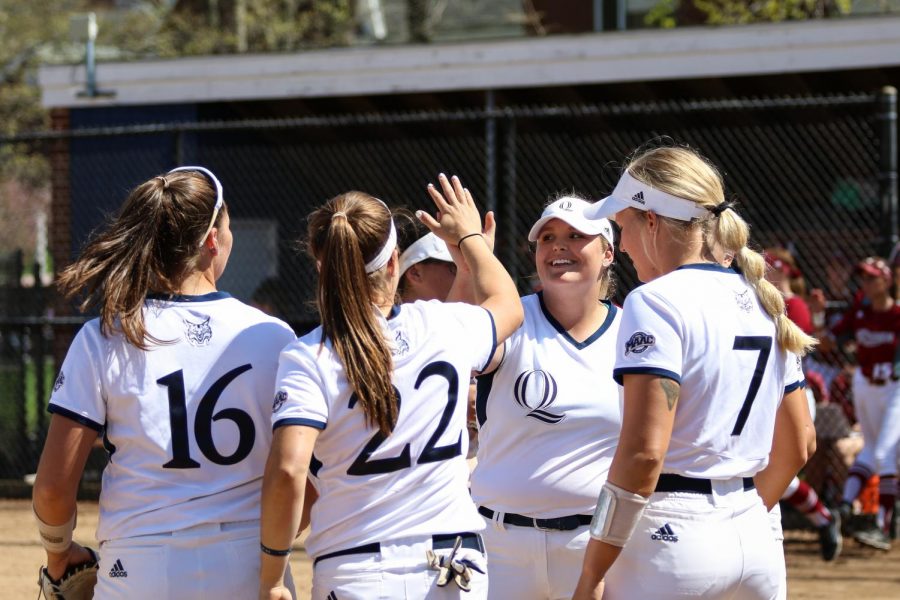 The Bobcats huddle up during a break in play.

Quinnipiac softball looks to come back with a vengeance this season under second-year head coach Hillary Smith. The Bobcats finished 17-33 overall and 8-12 in the Metro Atlantic Athletic Conference (MAAC) — eighth out of 11 teams. They are predicted to finish seventh in the MAAC this year according to the MAAC Preseason Coaches Poll.

The Bobcats welcome nine freshman to the team — all varying positions from outfielders Hannah Wickson and Sydney Tedim to infielders Katherine Rodriguez and Lala Pascual. An immediate impact from the freshmen would add depth and firepower to the lineup.


Catchers
Sophomores Lo Yarnall and Hannah Davis will likely split time behind the plate. Yarnall looks to build on her first season with the Bobcats, in which she appeared in 44 of 50 games with zero home runs and 15 runs batted in (RBIs). Behind the plate, she had 83 putouts while allowing seven passed balls. Look for her to be more comfortable at and behind the plate, building off her first year.

For Davis, she looks to build on a subpar first season. In 39 games with the Bobcats, she had zero home runs and five RBIs. Defensively, she had 114 putouts and 12 passed balls. If she makes some minor tweaks to her game, she has the potential to make a substantial contribution to the Bobcats.
Infielders
Junior utility Brighid Douglas keeps getting better season after season. After being named to the MAAC All-Rookie Team in her freshman year, she showed no means of slowing down. Appearing in 46 games, she hit two home runs and had 23 RBIs which each ranked second on the team. In the field, she is effective, having a .921 fielding percentage while committing seven errors in each of her first two seasons. Look for Douglas to continue producing solid numbers as she has in the past.

Senior utility Rachel Marchuk was shaping up to have a decent junior year before her season was cut short to an injury. Prior to the injury, she played 30 games, recording one home run, eight RBIs and a career-high in batting average (.325). Additionally, she had one of the best slugging percentages on the Bobcats last year (.438) and the second best on-base percentage on the Bobcats (.400) — only trailing junior captain Kayla Jensen. In the field, she was spectacular, having a fielding percentage of .915 last season. If she comes back healthy and continues the production that she was putting up prior to getting injured, the Bobcats’ lineup will be more potent than before.

After being named to the All-MAAC Rookie Team her freshman year, sophomore Alexis Otero looks to build off her successful first season. Appearing in all 50 games — playing one game at designated hitter — Otero hit two home runs and knocked in 24 runs while attaining a .232 batting average and .333 slugging percentage. Defensively, she was lights out with a .987 fielding percentage. Coming into her second year, she looks to build off her numbers offensively and be a rising star for this Bobcats team.
Outfielders
Junior captain Kayla Jensen looks to provide some leadership in the inexperienced Bobcats outfield. Appearing in 49 of the 50

games, she was a team leader in categories including batting average (.339) and slugging percentage (.429). She also had one home run and 13 RBIs, with a team-leading 16 stolen bases. On the defensive end, she was near-perfect, having a .955 fielding percentage but accumulated six errors last season. Look for her to be an integral part of the Bobcats’ lineup this year while mentoring the young Bobcat outfielders.

Freshman Sydney Tedim looks to make a lasting impact in center field her first season. In her first five games this season, she has a team-leading six hits in 12 plate appearances. She’s filling in a big hole in the Bobcats’ outfield that has lost three players coming into the season. She will get plenty of playing time this season in the outfield, as she looks to pair up well with Jensen and freshman Serena Fogg.
Pitchers
Senior Tiffany Kennedy-Cummings is a huge pickup for the Bobcats this season, as she will be playing her first season with the Bobcats. Cummings, who transferred from Fresno State, started seven of her 11 games, going 4-1 with a team best 2.45 earned run average (ERA). She also led the Frogs with a .250 opposing batting average and was third on her team with 28 strikeouts. Look for her to be the No. 1 starter for the Bobcats and one of the top pitchers in the MAAC, making an immediate impact in the pitching rotation.

Sophomore pitcher Brooklyn Maguire looks to make an impact in the Bobcats rotation. Appearing in 15 games with the team, she went 1-4 with a 5.95 ERA. With her slated as the third starter in the rotation, look for her to work with King, Smith and assistant head coach Brooke Scott to elevate her performance to the best it can be. This extra work mixed with additional exposure in more starts will help bring her confidence level up and produce wins for the team.
Prediction
Looking at how young the Bobcats are, they are going to have trouble competing with experienced teams in the MAAC, some being Cansius and Monmouth — who have 18 and 15 sophomores respectively, juniors and seniors, respectively. Based on the Bobcats’ reliance on youth, expect them to place sixth in the MAAC, going 22-29. The team may struggle early on but should surge in the standings as the season progresses.