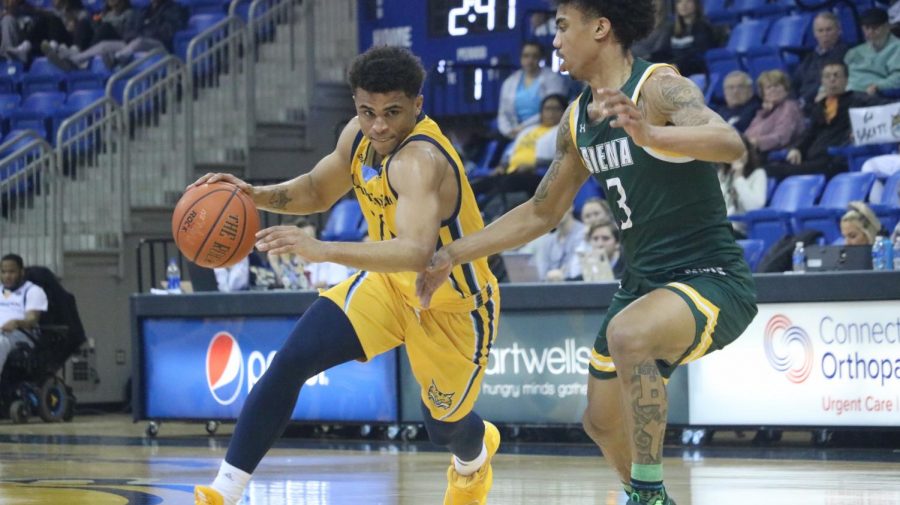 The Quinnipiac Bobcats (12-15 overall, 7-10 MAAC) came out on the losing side against the Siena Saints (16-10 overall, 12-5 MAAC) by the score of 84-77 Wednesday night, dropping their seventh game in the last eight contests.

After senior day celebrations for the team’s lone member of the class of 2020 — graduate student forward Aaron Falzon — wrapped up, the Bobcats worked their way to a nine-point deficit after the first 20 minutes. Siena shot 53% from 3 in the first half, powered by four 3-pointers from sophomore guard Jalen Pickett who was invited to the NBA’s G League Elite Camp after winning MAAC Rookie of the Year last season.

Quinnipiac came out of the halftime break and knotted the game up at 55-55 with just under 15 minutes left to go.

“I probably yelled a little bit,” Quinnipiac head coach Baker Dunleavy said when asked about his halftime message to the team. “We talked about really getting back on defense hard. We thought that the biggest part of the first half was about how hard we got back whether it was a made basket or missed basket, it depended on how quickly we got back on defense.”

The Bobcats were outscored 21-9 on points off turnovers and 20-11 in fast break points. Quinnipiac was unable to respond to multiple runs, specifically a 15-2 run in favor of Siena right after the Bobcats tied the game at 55 apiece.

The Bobcats were led by junior Rich Kelly’s 26 points along with Jacob Rigoni (12), Kevin Marfo (14) and Tyrese Williams (12) all scoring in double figures. Marfo also recorded a career high eight assists while adding 11 rebounds, his sixth straight game with 10 or more rebounds.

“We’re definitely not close to quitting at all. We’re gonna keep showing up, keep coming together,” Kelly said. “I think we’re not even close to our ceiling right now … we’re excited to see how much we can grow for the rest of the season. This group is capable of special things, so we are just gonna keep getting better.”