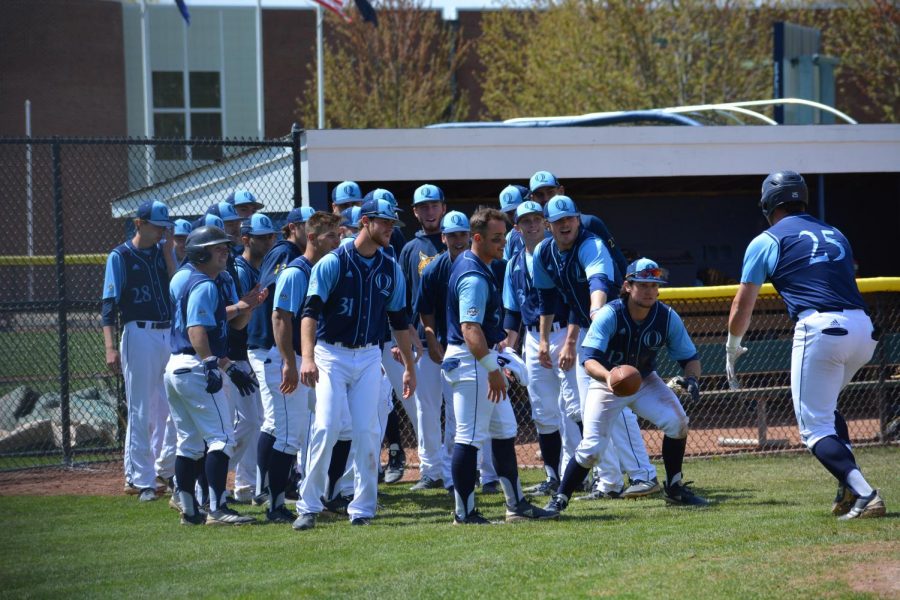 The Bobcats celebrate by handing off a football to every player who crosses home plate.

A 30-win season, winning the Metro Atlantic Athletic Conference (MAAC) for the first time and upsetting the No. 10 ECU Pirates in the NCAA tournament were all things the Quinnipiac baseball team accomplished in 2019. However, we’re in mid-February and it’s time for the 2020 team to carry on the program’s prior success.

The Bobcats are currently 0-6 and got swept by the University of Texas at San Antonio Roadrunners and the James Madison Dukes. But that’s just a small sample size for the squad that was projected to win the MAAC in 2020. Here are some things to look for as we dive deeper in the season.
Pitching: Finding diamonds in the rough
Last year’s Quinnipiac squad relied on its veterans to carry the pitching load. Those veterans were pitchers Chris Enns and Tyler Poulin. Enns had two complete games, a 7-5 record, a 3.47 earned runs average (ERA) and a 1.22 walks plus hits per inning pitched (WHIP). Enns finished second on the Bobcats’ pitching staff in total strikeouts (77) and opponent batting average (.250).

The southpaw led the Bobcats in innings pitched (87.0) and had a 7-2 record in 15 appearances. He led the Bobcats staff in strikeouts (87) and had a .251 opponent batting average. Poulin finished eighth in the MAAC in total ERA (3.83), seventh in batters struck out (82), fourth in wins (seven), and fourth in losses (two). Poulin was also selected in the 29th round of the 2019 MLB draft by the Arizona Diamondbacks.

As for his conference standings, Workman finished second in the MAAC in saves. However, all of this production is no longer of service. It looks as if the Bobcats’ 2020 pitching staff could be very top heavy, mainly relying on three pitchers: seniors Christian Nicolosi and Colin Donnelly and junior Arthur Correira.

In two starts, Nicolosi has 10 strikeouts, one earned run allowed and a 0.81 ERA. This is a small sample size which makes it uncertain how long Nicolosi can sustain this level of play and how the rest of the rotation fills out.

Quinnipiac has five new pitchers listed on its 2020 active roster, and has listed redshirt senior first basemen Kyle Horton as an active pitcher. Maybe freshman pitcher Brayden Garcia can step up, as Garcia pitched three scoreless innings in his only appearance against James Madison on Saturday, Feb. 22. It’ll be interesting to see how head coach John Delaney mixes and matches his pitchers moving toward conference play.
Offense: upperclassmen lead the charge
Quinnipiac’s 2019 offensive production was among the best in the MAAC. The Bobcats led in runs (380), hits (575), doubles (128), home runs (47) and RBIs (328). Despite 2019 home run leader Liam Scafariello (14) and on base percentage leader Brian Moskey each graduating, the Bobcats still have other core offensive players to rely on.

That core includes seniors outfielder Andre Marrero and infielder Evan Vulgamore, along with junior infielders Ian Ostberg and Colton Bender. As a junior, Marrero led the Bobcats in hits (74), games played (59), and on-base plus slugging percentage (.921) and slugging percentage (.538). Marrero was also third on the team in batting average (.316) and second in RBIs (48).

Vulgamore led the Bobcats in RBIs (55) and doubles (14). Ostberg can set the tone, as he was second on the team in batting average (.321) and hits (72). Bender’s pop from the left side of the plate contributed to his team-leading batting average (.322).

Now, numbers obviously aren’t everything, but it’s important to establish the track records of these players and the expectations they set for themselves moving forward. But, I quickly want to mention something that numbers can’t define: team energy
Can they keep the Bobcat bounce?
Often during games, announcers and fans would notice how loud and loose the Bobcats’ squad was during the 2019 season. A lot of successful teams like to carry that quiet confidence approach of letting the actions do the talking. The Bobcats weren’t afraid to engage with the opposing dugout.

Whether it was letting the pitcher know how badly he missed the plate, having a Bobcat receive a football at home plate every time they scored, doing a Fortnite dance on second base, seeing Donnelly or Workman lead the bench in synchronized dance or players goofily hijacking Delaney’s interview during the NCAA tournament, this method proved to be a factor in the Bobcats’ 2019 success.

With the same core of players around, don’t be surprised to see the Bobcats try to amp things up a step further in 2020. However, they still don’t have a win and will attempt to get that win in Lexington, Virginia, on Friday, Feb. 28, in the first game of a three-game series against Virginia Military Institute.