The NFL has a discipline problem 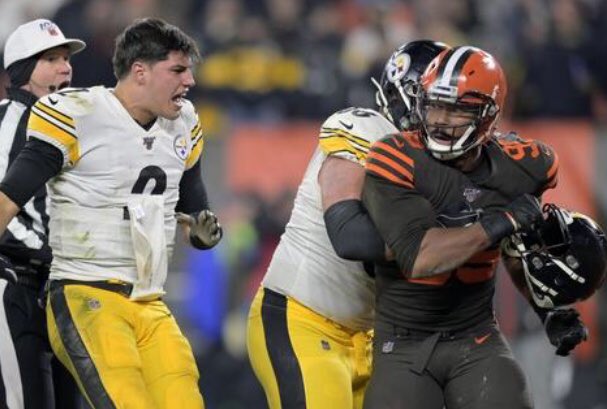 Football may be a violent sport, but some players take it to the next level — and the NFL does not seem to care.

After a long game in which the Browns dominated, Garrett — probably frustrated with his one-tackle, zero-sack game — hurled Rudolph to the ground well after the ball was thrown. Garrett held onto Rudolph while on the ground which prompted a scuffle as Rudolph tried to get Garrett off of him. This led to Garrett dragging Rudolph up by his helmet, ripping it off and infamously slamming the not-so-protective helmet on the quarterback’s head.

This action could have killed Rudolph. Garrett, a freak athlete weighing about 270 pounds, used a six-pound metal object to strike another person’s head. There was talk that this could lead to an assault charge at least. Forbes’ Eric Macramalla, who covers sports law, believed that Garrett would have been liable for assault.

“The problem for Garrett is that he appears to have been the aggressor,” Macramalla wrote. “And the physical contact was not proportional to the threat. So yes, while he may not be charged, it looks like criminal assault.”

I can hear Garrett defenders already. After all, Garrett claimed that Rudolph called him the N-word in the struggle. But an investigation by the NFL found that there was no evidence supporting the claim. This accusation did not come while he was on the field or at a postgame press conference but rather during a private hearing a week later when his appeal was denied. This was nothing more than a last-ditch attempt to get himself off of an indefinite suspension.

Does anyone really think Garrett wouldn’t have taken to Twitter or to a press conference immediately after the game to defend his actions? That he would not take to the public to defend his name from the people who were dragging him through the mud? Yeah, I thought so.

Garrett’s dishonorable accusation automatically and unfairly puts Rudolph in a bad light even with his acquittal after the NFL’s investigation. A stigma like this does not go away. It festers and remains in the back of people’s minds. When Rudolph inevitably takes a journeyman job as a backup quarterback, a simple allegation like this could be all it takes to not get that job, despite it being fictitious or at the very least unproven.

During Garrett’s interview with Mina Kimes on ESPN’s show, “Outside the Lines,” he continued to slander Rudolph.

Rudolph took to Twitter to defend his name once more.

“1000% False. Bold-Faced Lie. I did not, have not, and would not utter a racial-slur,” Rudolph tweeted. “This is a disgusting and reckless attempt to assassinate my character.”

But here we are in February — three months after the attack — with Garrett ready to play in the 2020 season even though he assaulted someone in a fit of rage on the field.

Garrett serves as yet another example of how the NFL has failed to address acts of violence by NFL players on and off the field in recent years. Players like running back Kareem Hunt received a 10-game suspension after he shoved and kicked a 19-year-old woman in a hotel. Hunt was signed last February with the charges levied against him and will enter free agency this offseason where he is expected to receive yet another contract.

Linebacker Reuben Foster is another prime example. Over the past three years, he was arrested for marijuana possession, making criminal threats and weapon possession, with only the latter charge resulting in a two-game suspension in 2018, the year after he was drafted as a first-round pick. Foster was also involved in a physical altercation with another woman, whom he slapped and pushed around in November 2018. This led to the San Francisco 49ers releasing him, although the charges were dropped. It is worth noting that this was his second arrest for allegedly committing domestic abuse, but the women recanted for the first accusation.

In spite of his history of domestic abuse, he was signed by the Washington Redskins just days after his release. Sure enough, the NFL issued a punishment with the might of a housefly.

What’s the standard? There is no pattern. There is no consistency. The NFL has failed over and over again to punish players in a sensible way.

Maybe it’s not worth comparing these. But the end result is that players receive the same type of punishment despite committing crimes that are entirely different.

It is also important to remember that these are exactly that — crimes. If these people were not granted the incredible gift that they possess, the ability to play in the NFL, they would be imprisoned instead of receiving millions. If Hunt were not making millions, he would be unemployed in nearly every other line of work.

And this is one of the biggest reasons these crimes continue to be committed. Players do not fear the repercussions because the punitive measures are temporary. A few game checks mean little when you will still receive millions of dollars.

But the NFL is a business. It ultimately does not care about the crimes its players commit. Sure, players may give the league a bad image, but as long as it dishes out a suspension or fine, no one seems to care. In fact, it is expected at this point to have cases like Fosters’ or Hunt’s.

Every offseason, a few cases emerge. Year in and year out.

The NFL cares about putting the best players on the field regardless of the situation. Players like Foster, Garrett and Hunt are incredibly talented football players. They make the games more entertaining because of their special abilities.

And so this will continue. A pointless, unpredictable cycle of suspending players for a few games and moving on like nothing happened. Future cases will continue to emerge as the punishment is pitiful at best.

Maybe one day the league will sharpen up its act. The new Collective Bargaining Agreement (CBA) being proposed by the NFL has several rule changes that would help clean up the league’s problems if passed. Personal conduct cases would be dealt with a neutral arbitrator, someone who is capable of dealing out punishments. Commissioner Roger Goodell would be relegated to only having authority in regards to the integrity of game matters. The league would also decriminalize marijuana, with players only receiving fines instead of game-suspensions.

Both of these changes would affect the way the NFL conducts their investigations. And while there may be some controversy regarding the decriminalization of marijuana, adding an arbitrator to deal with conduct cases is a brilliant idea. Goodell is not qualified to be judge, jury and executioner.

There is no assurance that these new proposals come into play as the new CBA has not been passed yet. But adding these changes would mark a good step towards dealing with the issues before another major personal conduct case forces the league’s hand.

So get ahead of the curve, NFL. Make a change before a crime makes it for you.