Lack of student involvement is among chief concerns 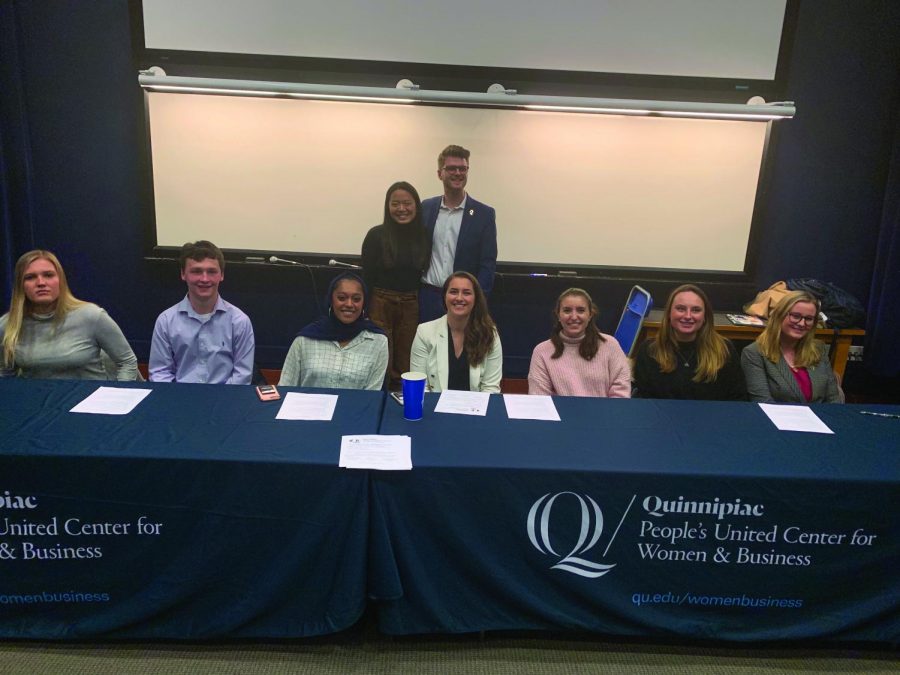 Student leaders from across the university called for more student involvement.

Quinnipiac student leaders found that a lack of student engagement is among their greatest challenges, following a panel discussion on modern leadership on Wednesday, Feb. 19.

The panel included some of the most notable student leaders on campus and was moderated by Austin Calvo, president of the Student Government Association (SGA). Of the topics discussed at the panel, the lack of engagement among students was the most prominent.

“It’s an emerging problem, not just here at Quinnipiac, but at all college campuses,” said Leah Lavin, graduate assistant for the Department of Cultural and Global Engagement. “We’re seeing a lot of decreased numbers in study abroad involvement and engagement. We’re seeing it everywhere.”

Only 66% of college students reported at least one hour of participation in student organizations per week, according to data from the 2015 Project CEO Benchmarking Study.

“I am the president of the Muslim Student Association and people think that it’s solely for people who follow the faith of Islam, but anyone’s welcome,” said Irsa Awan, a junior health science major. “People are wary of putting themselves out there. I think it’s a challenge that we face of having students do that.”

Members of the panel agreed that a large part of the decreasing student engagement is the extensive variety of opportunities. Awan pointed toward the the Department of Integrated Marketing Communications and its promotion of certain organizations over others on Quinnipiac University’s Instagram, while others mentioned specific members of the university’s preferential treatment.

“We have President Olian promoting the Big Event. But we need to have more awareness for the multicultural organizations or like spirit club or club sports,” said Sophia Marshall, vice president of SGA and club soccer president.

While involvement in student activities can be demanding of the average student, participation is even more difficult for students involved in Quinnipiac athletics.

“It’s really difficult for all athletes to balance (clubs) because if we’re asked to go to a meeting at 9:15 at night, three days a week, we also have practice at 6 a.m. the next morning. It gets to a point where you’re stretched a little thin,” said Kaleigh Oates, senior advertising and integrated communications major and women’s volleyball team captain. “I think over-programming is an issue, but we just basically ended up doing the things that we get hounded the most to do.”

Students are overwhelmed with events on DoYou QU, a website in which all student-run events are posted by their respective clubs. Clubs often have events or meetings at the same time, leading to a choice from students who are engaging on campus.

“Not signing up for every little thing that we get asked do a has been a lesson that I learned after sophomore year,” Oates said. “My team had a total community service burnout where we were doing two events every weekend.”

Chronic stress and intense workloads that the students experience can often lead to burnout. According to Sherrie Bourg Carter of Psychology Today, burnout can lead to both physical and emotional exhaustion, detachment and feelings of ineffectiveness.

The panel members were very aware of the causes of burnout and what can happen when burnout is not addressed. Most of the panel members emphasized the importance of having a support system on campus to turn to when one is overwhelmed.

“Always check in with yourself when you get the chance,” said Sean Regan, president of Beta Gamma Sigma, the business honors society, and the Computer Information Systems Society. “It’s really important to take time for yourself and work on yourself and talk to those that are there to support you and know you need something.”

Panel members emphasized the importance of joining clubs based on passion despite the risk of burnout. However, they made it clear that one must take care of themselves first before they can put their time and energy into an extracurricular.