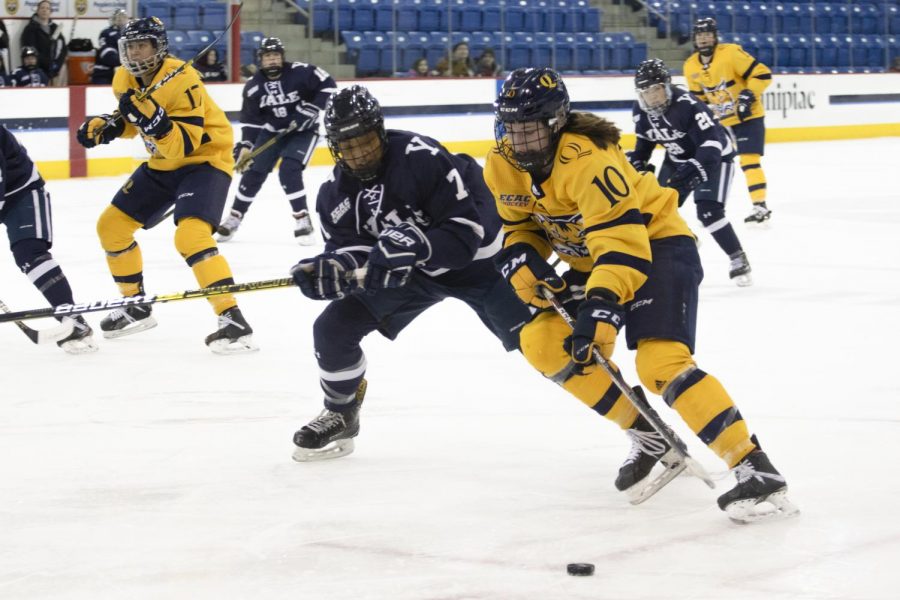 Quinnipiac sophomore forward Lexie Adzija was out of the lineup so senior defenseman Kenzie Prater filled in for her as the first-line center. Yale took advantage of that in the faceoff dots, winning 42 of the 59 draws.

“We haven’t been good in general in faceoffs recently. It’s definitely a space where we want to be better,” Quinnipiac head coach Cass Turner said. “Prater is an incredibly flexible player who can really play anywhere. She played two years as a center here at Quinnipiac.”

The first 20 minutes of the game did not provide much action other than an outstanding right-pad save by Yale junior goaltender Gianna Meloni on a Quinnipiac odd-man rush.

Just a few minutes later, a freak injury to Yale freshman forward Elle Hartje silenced the crowd and both benches. Sophomore forward Charlotte Welch replaced her for the remainder of the game.

To start the second period, Quinnipiac provided much more intensity and aggression attempting to break the deadlock.

It did not take long before Quinnipiac senior forward Sarah-Eve Coutu-Godbout gained inside position on a Yale defender inside the crease and had the puck deflect off of her and into the net for her team-leading 14th goal of the season.

Both teams battled for the next few minutes to maintain control of the puck before Yale sophomore forward Claire Dalton took matters into her own hands.

She carried the puck from end-to-end and undressed a Quinnipiac defender en route to backhanding the puck over the glove of senior goaltender Abbie Ives to tie the game up for Yale, posting her team-leading 28th point of the season.

With just under two minutes to play in the second period, Welch one-timed a perfectly placed pass top-shelf once again over the glove of Ives to give Yale its first lead of the game.

Heading into the final period, Yale began to dominate and take the game into its hands. The Bulldogs clamped down on the Bobcats and prevented any high-danger scoring opportunities and at the other end netted two more goals to close out the game.

Yale forced a turnover in the Quinnipiac end, Welch took the puck to the top of the circle and passed it across the slot to awaiting sophomore Rebecca Vanstone who fired a shot that deflected off a Quinnipiac skate and proceeded to pop over the head of Ives and roll into the net.

WIH: Here's the puck-luck goal. Could not have taken a weirder bounce. pic.twitter.com/UNfitfZSLB

Following Yale’s puck-luck goal, senior defenseman Kati Tabin had a tremendous opportunity from the point with Meloni screened by several players and fired a wrist shot that glanced off the outside of the post and bounced off the boards and out of the zone.

Quinnipiac’s lack of execution on offense led to another goal from Yale. Despite standing on her head and making a series of unbelievable desperation saves, Ives could not prevent the final shot from going in as junior forward Rebecca Foggia tapped one over the goal line to extend Yale’s lead to three goals.

The last few minutes were not as action-packed as Yale only allowed one more shot on goal before Coutu-Godbout was sent to the box for a minor penalty, ultimately ending any chance Quinnipiac had at a comeback.

“Yale’s a good hockey team. They played a strong game today. They stuck to their gameplan, and they were ready to execute when they got their moments,” Turner said. “I think for our team it’s an important step for us. It’s a good opportunity for us to be able to rebound tomorrow.”