Three in the Key: Saying hello to a first-round bye 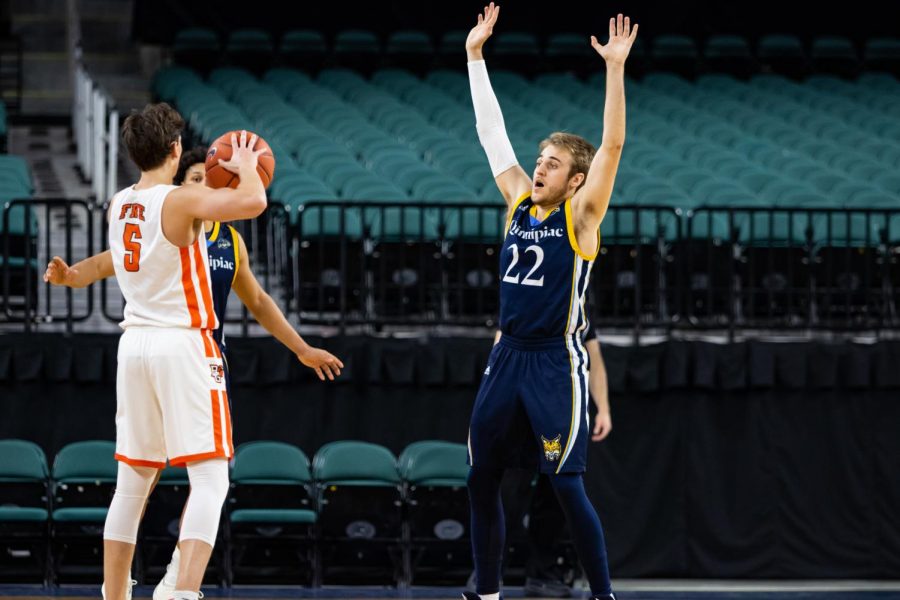 As the season’s end inches closer, the Quinnipiac men’s basketball team has begun a downward spiral in the MAAC standings.

The Bobcats have struggled immensely as of late, losing five straight and eight of their last 10 games.

To be frank, that’s not good, especially since Quinnipiac sits eighth out of 11 teams in the MAAC standings. The team is 6-8 in conference play and is not in position to get a first-round bye.

“I think this is a situation where we certainly feel like we have better results in us, and we’re not happy with the way the results are going,” Quinnipiac head coach Baker Dunleavy said. “But also, we’ve been faced with controversial times before, and I’ve never felt like our team gave in or didn’t want to come to work and I feel the same way about this group right now.”

On the bright side, the Bobcats have time to get back to their early-season winning ways. They have six games left — all against MAAC opponents. Of those six games, the Bobcats have one against Canisius, Fairfield and Marist — the three worst teams in the conference.

Additionally, the MAAC is wide open. Saint Peter’s and Siena are tied for the conference lead with a 10-5 MAAC record, while Quinnipiac sits eighth with six wins.

Surging to the top of the standings seems unlikely for Quinnipiac. Instead, it should aim for a first-round bye which is given to the top five teams in the MAAC.

The Bobcats would have to move up three spots in the standings. It sounds daunting, but they’re only one game back from fifth place Monmouth.

So, how does Quinnipiac turn its season around and claim a first-round bye in the MAAC playoffs?

It’s that simple. The Bobcats have to improve their defense, and the players understand the importance of this.

“Defense wins championships,” redshirt junior forward Kevin Marfo said. “I think that’s probably the most important thing we have to focus on as a team is defending and coming together as a team and playing for one another.”

They also rank seventh in the MAAC in that category. Also not great.

But with the playoffs around the corner, expect Quinnipiac to raise its defensive intensity and lower that average. With Marfo leading the charge, it’ll be a challenge for opposing teams to score within the paint.

Marfo is the clear-cut anchor of the Quinnipiac defense and is the best rebounder in Division I men’s basketball. That said, it’s not all on Marfo. He said everyone has to hold themselves accountable.

“I think we all got to be leaders and command ourselves as well,” Marfo said. “I think we all have to try to set a high example for ourselves because we all care about what we’re doing here, and I think we all play a part in that, not just one person.”

As Marfo said, everyone needs to step up. That’s how the Bobcats are going to make up ground in the MAAC standings. Six strong defensive outings prior to the MAAC playoffs would not only give the Bobcats a chance at a first-round bye, but it would bring momentum into the tournament.

The importance of that momentum is undeniable, and graduate student forward Aaron Falzon made it clear to the team.

“Aaron has been playing a big part of (leading the team) because him coming from Northwestern and just having that sense of urgency to like, ‘We gotta get it done now. It’s here. We have a pretty great team here right now,’” sophomore guard Tyrese Williams said. “(He’s) just trying to put that sense or urgency into everyone.”

Quinnipiac has a chance to end its five-game skid on Friday, Feb. 21, at home against Canisius. The Bobcats stomped the Golden Griffins in their own gym 90-73 on Jan. 31. This game shouldn’t be too different. Canisius is the worst team in the MAAC with a 4-10 conference record and has a dreadful 2-11 away record. Additionally, the Golden Griffins are on a three-game losing streak.

This is where the Bobcats have to end their downward spiral and make a run for that first-round bye.

“In the locker room, we’re pretty upbeat,” junior forward Jacob Rigoni said. “We obviously have a lot of belief in ourselves, and it’s a make-or-break time … If you choose to feel sorry for yourself and be disappointed that the results are going our way, that’s when you stop getting better.

“But, if we take a step back and look at the errors we make and the areas we still need to improve on, we can use this tough point in our season to keep growing from it.”