From the pitch to the hardwood 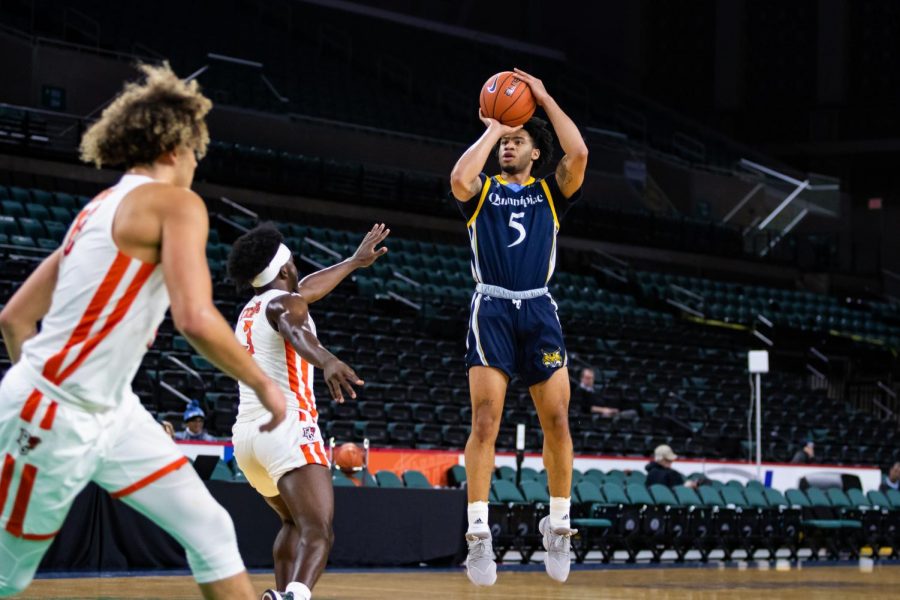 Sophomore guard Tyrese Williams pulls up for a jump shot.

Quinnipiac men’s basketball sophomore guard Tyrese Williams had a successful freshman season and is on track to have another good one this year. But, what would the Bobcats be like without Williams on the court?

Well, if Williams stuck with his first love, he could be on a whole different team, maybe not even at Quinnipiac.

“Soccer was his first sport,” said Troy Williams, Tyrese Williams’ father. “We put him out on the soccer field, and he just took to soccer like a fish to water.”

“My godmother lives across the street from where they had this rec league for soccer,” Tyrese Williams said, explaining his first memory of the sport. “My mom took me over, and I ran on the field. There were a bunch of other soccer players and one of the coaches was like, ‘Nah, he’s good. Let him play,’ and then I just gradually grew up with those guys. One of them became my best friend.”

He spent most of his time on the field as a center defensive mid, but like most young players, he moved around a decent amount. In his later seasons, he made the transition to forward and became a goal scorer. His height, a key characteristic of a natural striker, only made the decision to switch positions easier.

By the time he reached eighth grade, Williams had to make the decision between basketball and soccer. As he began playing in more competitive leagues, the two seasons started to overlap and interfere with one another. But for Williams, the decision was not hard to make. Though he loved soccer and had played for years, basketball was his most profound passion, and he wasn’t willing to give up.

“I have always been around (basketball),” Williams said. “Where I’m from, all there is are parks, and all we do is play basketball from sunup to sundown.”

Williams praises his parents for allowing him to decide which sport to focus on in eighth grade. They supported him throughout the transition, and, “pushed (him) to be better and to take on (his) own goals and just create (his) own path,” according to Williams.

On the other hand, Williams’ soccer coach and teammates were not as thrilled to hear he was leaving the sport to focus on basketball. Though they were supportive of his decision, they were sad to see him go and lose a teammate they’d played with for years.

“It hurt my coach more,” Williams said. “My teammates already knew that I was going to be a good basketball player. Once I hit eighth grade, they were more supportive of it.”

Even though he left the sport, the time he put in and the skills he developed playing soccer did not go to waste. Though they are not compared often, soccer and basketball have some commonalities when it comes to footwork and vision of the playing field. Williams sees the impact of his soccer career translating to his play on the basketball court as well.

“It was kind of easy because soccer is a lot like footwork, a lot of up and down, running and pace, stamina and all of that, so it was kind of an easy transition,” Williams said. “It’s just now I have a ball in my hand. If I come off a down screen, knowing the right way to plant and pop out to catch the ball. Or even stamina wise, just knowing that it’s an up-and-down game, to pace yourself and you’ll be good.”

Even Williams’ father, who has been fieldside and courtside throughout his son’s athletic career, has noticed what soccer has done to Williams’ basketball skill set. His quickness and court vision are two of the many skills Williams’ father believes his son has gained from his years as a soccer player.

Even though soccer does not play as big of a role in Williams’ life as it did before he stopped playing, Williams still actively follows the sport. As a fan of the Spanish league La Liga, particularly the teams FC Barcelona and Real Madrid, Williams has followed stars like Neymar and Cristiano Ronaldo throughout their playing careers. He continues to keep up with soccer through social media and claims to be a “Big, big FIFA guy.”

So, where would the Bobcats be without Williams on the court? Well, the sophomore guard has played in every game so far during his time at Quinnipiac, putting up a total of 529 career points and averaging 9.6 points per game.

He is a strong defensive player as well, averaging three defensive rebounds per game. Not only is Williams a key player on the court, starting 53 out of 55 games and averaging 28.3 minutes per game, but he is essential to the team’s mentality off the court.

“(Williams is) a really unselfish guy off the court,” Quinnipiac men’s basketball head coach Baker Dunleavy said. “He’s a fun-loving guy that the guys like to be with, and (he’s) really smart and takes care of business in the classroom. Just a guy overall you can depend on, and I think, when you’re a coach, you want to find as many of those guys as you can.”

“He leads by example,” Kelly said. “He is a very key piece to what we do on the court and is a great overall piece to the team.”

Williams has been a key piece to the Bobcats’ success since he first put on the Gameday Gold jersey. His personality has been a staple in leadership, both on and off the court. It is something that he has been known for his whole life.

“He always had a real big smile on his face,” Williams’ father said. “His attitude and his outlook on life has always been really positive.”