You can’t stop the ‘Bern’ 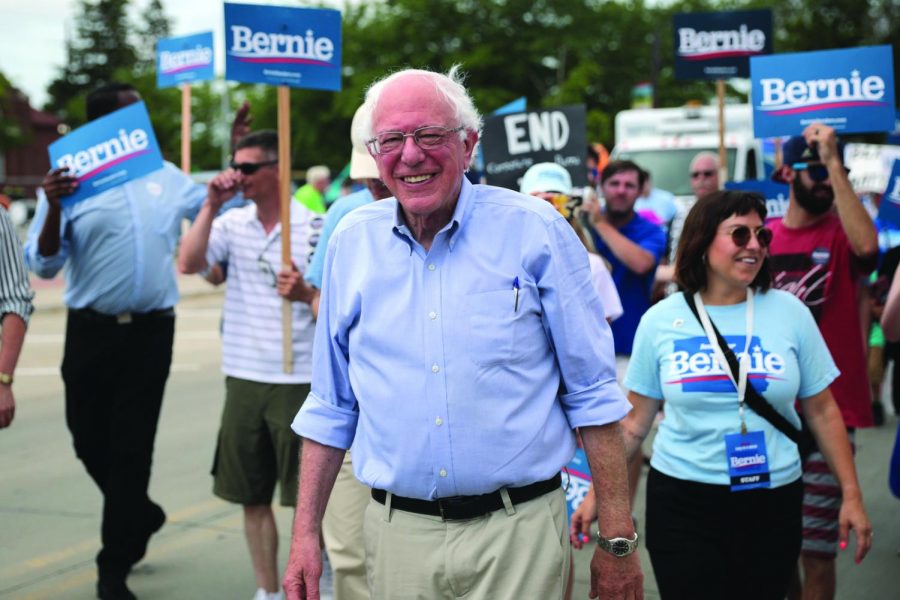 Bernie Sanders has proved his doubters wrong once again.

The man who Hillary Clinton said in her upcoming documentary is a “career politician” who “nobody likes” is coming off of an impressive New Hampshire Democratic primary victory and an Iowa caucus finish only 0.1% outside of first place, and his momentum isn’t stopping anytime soon.

Coming only four months after Sanders had a heart attack that stuck him in a hospital for three days, it’s unbelievable how he’s the most energetic out of all the Democratic nominees, but the real reason why he has this much of a lead is because of the immense support he has from voters and donors.

Sanders has to compete against candidates like Pete Buttigieg, who Forbes estimated to have 40 billionaire donors to his campaign, while relying almost entirely on small donations from everyday Americans. Sanders’ 1.5 million individual donors is almost double than Buttigieg’s 750 thousand donors.

In 11 out of the past 15 presidential elections, the candidate with the bigger budget has won, and Sanders is looking to buck that trend. He is showing the world that you don’t need to be a billionaire like Tom Steyer or Michael Bloomberg or have billionaire donors like Joe Biden and Buttigieg to win. What a candidate needs is to have a platform that champions for the working class and the people who have been oppressed by the rich and the government for far too long.

It seems that Bloomberg is the exact opposite of Sanders.

While Bloomberg uses his vast amount of wealth to buy his way into the election, Sanders has built a strong base of loyal supporters that have stayed with him for years. While Bloomberg hasn’t raised a single dollar from small donations, 56.2% of Sanders’ total money raised is from small donations, according to the Center for Responsive Politics. While Bloomberg supports racist policies such as stop-and-frisk that have ruined minority communities in New York, Sanders has called for an end to the War on Drugs and a heavy investment into affordable housing.

These proposals by Sanders’ don’t appeal to the one-percenters, but they do appeal to the common people who might struggle with paying medical bills, working multiple jobs or having debt as soon as they leave college. That genuine commitment to the American people and not just a few special interests is why Sanders is so appealing.

But the Democratic National Committee has done everything in its power to stop Sanders.

In January, Politico reported that a small group of DNC members have been discussing ways to weaken Sanders’ campaign, and the DNC changed its eligibility rules for the January debate in order for Bloomberg to participate, after he donated over $300,000 to the committee five days before he announced his candidacy.

Special interest groups don’t want to see the status quo disrupted, so they will do anything, even lie, so long as their bottom line isn’t hurt — that’s especially true for the mainstream media. Media watchdog group FAIR reported in 2016 that the Washington Post ran 16 negative stories against Sanders in less than 16 hours.

Nothing has changed today.

On Feb. 8, MSNBC host Chris Matthews appeared to connect the violent regime of Fidel Castro in Cuba to a Sanders presidency.

“I have an attitude towards Castro,” Matthews said after the New Hampshire Democratic debate. “I believe if Castro and the Reds had won the Cold War there would have been executions in Central Park and I might have been one of the ones getting executed. And certain other people would be there cheering, okay?”

When fellow MSNBC host Chris Hayes stepped in and said that Sanders “pretty clearly” doesn’t support the type of regime that would champion public executions, Matthews rejected it.

“How do you know,” Matthews argued. “Did he tell you that?”

Of course, it’s absurd to say that Sanders supporting policies like Medicare for All, free public college and higher taxes on the rich is similar to the horrible regimes in Cuba and Soviet Russia, but Matthews clearly doesn’t care about the truth, and neither does MSNBC if it continues to give him a paycheck.

In an analysis by In These Times, researchers found that from August to September 2019, MSNBC covered Sanders the least between him, Warren and Biden, with only 36% of episodes mentioning Sanders. Despite the low mention rate, Sanders also had the highest percentage of negative reporting with 20.7% of his mentions being negative and only 12.9% positive.

The media also tried to push the faulty narrative that Sanders told Senator Elizabeth Warren that a woman couldn’t win the presidential election.

On Jan. 13, CNN reported that Sanders told Warren in a private meeting between the two in December 2018, that a woman couldn’t be elected as president. The problem being, though, is that none of CNN’s sources were in on the meeting and never heard him actually say it.

In fact, Warren herself didn’t confirm it instantly. She decided to wait and see if these allegations would work in her favor, and when she saw support on social media, she finally chose to say that the allegations were true.

A day after the report came out, during the Democratic primary debate in Des Moines, Iowa, CNN moderator Abby Phillip asked Sanders if he ever said to Warren that a woman couldn’t win.

“As a matter of fact, I didn’t say it,” Sanders said emphatically.

Then, directly after Sanders again said that he did not say that, Phillip asked Warren, “What did you think when Senator Sanders said a woman could not win the election,” as if she didn’t even listen to Sanders’ side of the story.

CNN and other mainstream media sources don’t care about fairness or objectivity. If they did, they would recognize Sanders’ popularity and wouldn’t try to slander his name based off of a baseless lie.

Unfortunately for CNN, voters didn’t bite. Since then, Warren’s numbers have tanked, as she only came in fourth place in the New Hampshire primary, getting only 9% of the votes.

Her candidacy seems to be slowly dying, and Sanders is taking a commanding first place among the democratic field. But still, the media won’t acknowledge his victories, with the praise staying with Buttigieg and Amy Klobuchar for placing in second and third place in New Hampshire.

None of that matters to Sanders, though, as he continues to stick to his same talking points of socialism and populism — and it’s amazing.

He chooses to fight for people despite everyone in the Democratic Party trying to stop him. He doesn’t care if his views are unpopular, he just wants everyone to have basic human rights. For his entire political career, Sanders has stood up for what he believes, no matter the consequences. He is honest, caring and unapologetic.

Despite what the media and the political establishment want you to believe, Sanders is the best candidate for everyone, and he won’t let anyone down, not after coming this close to success. He has gone through the wringer and hasn’t lost his step.

In a field of democratic candidates full of billionaires and corporate shills, Sanders is a breath of fresh air. That’s why he’ll win.