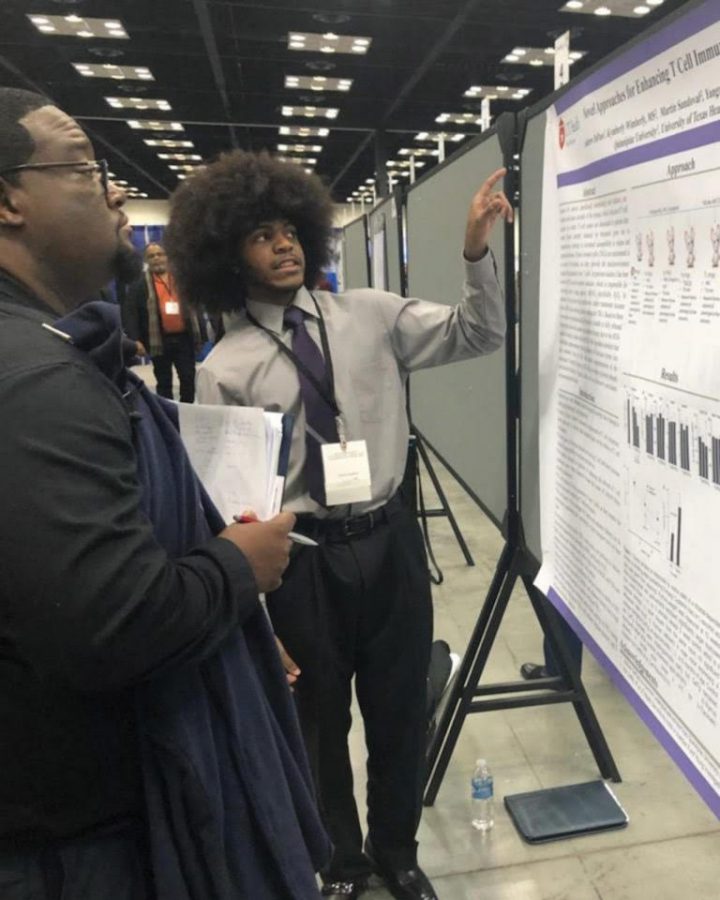 Andrew DePass has always been interested in science, which he owes to his childhood surrounded by his scientist father and his colleagues.

It’s that interest that resulted in DePass being recognized by the American Association for Cancer Research (AACR) for his work in the field.

DePass is a junior biology and computer science double major from Freehold, New Jersey, and has devoted himself to the fields he specializes in. Last summer, DePass spent his time at the University of Texas Health Center in San Antonio, where he worked alongside immunologists studying T cell immunity.

“(The research) really was directed at T cells and T cell regeneration and repopulation following, cancer patients, going through cancer therapy,” DePass said, “So essentially the goal (of) the research was to find a way to make cancer patients less susceptible to things like relapse and opportunistic infection.”

T cells are “a type of white blood cell that is of key importance to the immune system and is at the core of adaptive immunity, the system that tailors the body’s immune response to specific pathogens,” according to medicinenet.com.

A central goal of their research was to discover a way to supplement the repopulation and regrowth of the T cells in cancer patients. After patients undergo chemotherapy treatment, the immune system is left depleted and lacking in     T cells, leaving them susceptible to relapse and opportunistic infections.

DePass and his associates were unable to find a way to aid the repopulation of  T cells after chemotherapy, however, they were able to make T cells more resistant to radiation treatments. By giving their model organisms (mice) N-Acetylcysteine, a type of medication,  they were able to retain more T cells following treatment.

“So, what we see is that after mice undergo radiation just like a cancer patient would, (there is) major depletion of T cells. Some of these mice, we would give an antioxidative supplement and (these mice) maintained a higher amount of T cells relative to those that were not given it,” DePass said, “We saw higher maintenance of T cells, but we didn’t see a rebound in a whole new growth in the population of T cells.”

DePass sought to make it clear that their results are not fully confirmed according to common scientific practices of validation and repetition.

“Keep in mind that the research was over the course of the summer. Over those few months, you have very little time to generate data. So this was seen in a bunch of mice, but more tests need to be done in order to fully validate the research,” DePass said.

DePass’s dedication to the field of biology is made clear, not only through his advanced research but through his focus on even the basic principles of science. DePass also passes on his beliefs on proper scientific practices to other students.

“(Andrew) has visited my BIO 150 courses the last two fall semesters to talk to the first year students about how to find research,” said Michael Vieth, a senior instructor in biology.

DePass also has a personal connection to the cancers he seeks to help patients defeat, growing up knowing people who have suffered from the debilitating family of diseases.

“Going into doing research at that time, I knew cancer was there, folks I know have been affected by cancer, but it sort of came out as being like a passion for doing research and a passion for helping people,” DePass said. “So I saw this as an area where I could, where I had the opportunity to explore that.”

DePass claimed that he has been inspired by a great many people in the scientific and Quinnipiac communities, such as his father and Vieth.

“Since his first semester, Andrew has challenged himself in his course selection, with a simple goal in mind: get into research,” Vieth said. “He is a great example of what a biology major can be, and what occurs when a student takes control of their own education and self-advocates: they can accomplish anything.”

As a member of the Quinnipiac Science Technology and Engineering Program (QSTEP) DePass presented his findings at a QSTEP event. Additionally, DePass delivered his final presentation in November at the Annual Biomedical Research Conference for Minority Students in Indiana, where he won the award for “Outstanding Presentation in Cancer Biology.” DePass’s award from the AACR provides payment for conference fees as well as a stipend for national conferences in San Diego, California, and Washington D.C. DePass plans to attend the San Diego conference, where he said that he will be able to present his research.