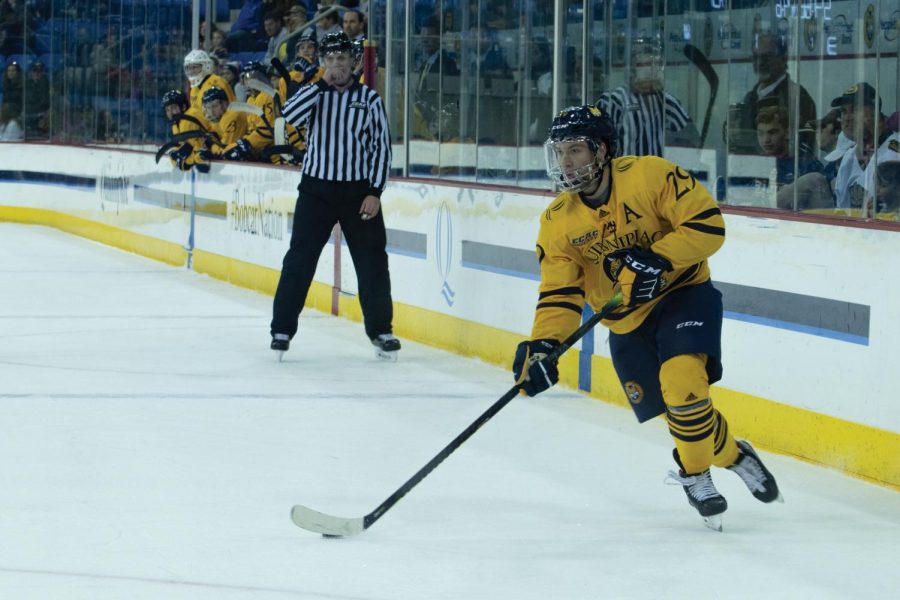 Beating the No. 1 team in the country and being ranked near the NCAA tournament cutoff line, you could say the past two weeks has been eventful for the No. 15 Quinnipiac men’s ice hockey team (17-10-2 overall, 10-5-2 ECAC Hockey).

“Tonight was three games for us,” Pecknold said. “The first period we stunk, the second period we were great and the third period we were pretty good. We keep talking about it as a team, we have to put 60 minutes together to beat any team, let alone the No. 5 team in the country.”

The first period didn’t start the way Quinnipiac wanted it to. Clarkson put pressure on Quinnipiac, as multiple players positioned themselves in front of Quinnipiac junior goaltender Keith Petruzzelli. Freshman forward Mathieu Gosselin looked to have jammed the puck past Petruzzelli, but the referees let play continue.At the next whistle, the referees called an official review and deemed Gosselin’s efforts to be a good goal.

Mid-way through the first period, Clarkson freshman forward Anthony Romano gained possession in the offensive zone. Romano shot the puck toward the net, and it deflected off of senior defenseman Karlis Cukste’s skate to put the Golden Knights up 2-0.

The last 10 minutes of the period saw the Bobcats get in sync, as sophomore forward Mike Lombardi fired a hard wrist shot that caught Marotte by surprise to make it a 2-1 game. The Bobcats ended the period outshooting Clarkson 9-8.

“It was kind of a weird play,” Lombardi said about his goal. “It bounced off the glass and (Quinnipiac sophomore defenseman Zach) Metsa came down and tried to get it on net. I knew we had traffic there and lucky enough it went in there.”

The second period was an entirely different story. Quinnipiac earned itself a power-play opportunity against Clarkson’s especially stout penalty kill. Before the opportunity, the Golden Knights only allowed one penalty kill goal since the start of 2020 and killed 19 consecutive penalties.

With sophomore forward Wyatt Bongiovanni and senior forward Odeen Tufto receiving extra attention from the Clarkson defense, another Bobcat had to step up.

That Bobcat was freshman forward Ethan Leyh, who had open space on the power play and fooled Marotte into thinking he was passing the puck. Instead, he put it through Marotte’s five-hole to tie the game at two, scoring his first goal since Jan. 4.

The end of the second period saw another atypical hockey play. Clarkson gained possession in its offensive zone, as sophomore forward Anthony Callin got the puck towards net and lifted it over Petruzzelli to give the Golden Knights a 3-2 lead.

Despite outshooting Clarkson 19-6, Quinnipiac trailed after the second period. The Bobcats are a miserable 0-8 in such games.

The third period saw play tighten up, including some stellar saves from Petruzzelli. Pecknold decided to pull Petruzzelli in favor of a sixth skater with over two minutes left in regulation. It didn’t pay off, as Marotte and the Golden Knights held on.. Quinnipiac finished the game outshooting Clarkson 41-24.

Petruzzelli finished the game with 21 saves and Lombardi had nothing but glowing remarks on his netminder.

“Keith’s our rock,” Lombardi said. “He plays so well every night, he works so hard and obviously he’s a really likeable guy off the ice. He’s the heart and soul of this team, and when he’s going, we try to help him out.”