State of the QUnion promotes achievements 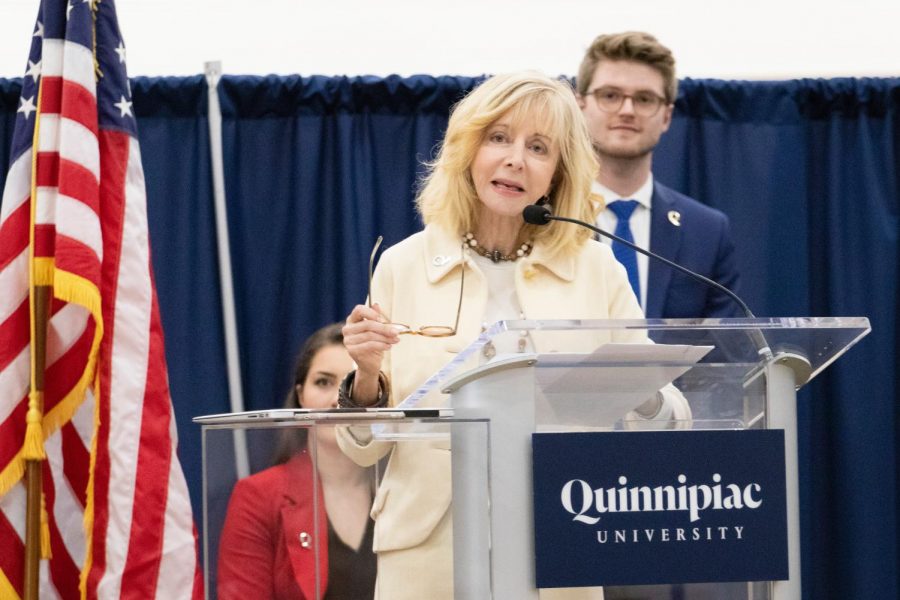 Judy Olian focused on construction and community in her speech.

The Student Government Association (SGA) gathered high-level administrators on the Burt Kahn Court to answer student questions at the annual State of the QUnion on Feb. 6.

SGA rolled out a new format for this year’s event. While in years past, questions were mostly submitted by students and read by SGA, this year’s questions were submitted live at the event and SGA prepared several questions based on student feedback they have heard throughout the year. There was also a panel of 14 students representing SGA class presidents and voices from underrepresented communities.

Attendance was also encouraged in person as SGA rolled out incentives for students to go. Those who did were entered into a raffle for concert tickets and sororities were given panhellenic credit for attending, among other incentives. It paid off, as hundreds gathered in Burt Khan to ask questions.

“I have been on SGA since I was a freshman, and this is the biggest state of the QUnion that I have ever seen,” said Julia Suessor, SGA senior class president. “I think it’s important that we continue to do events like this.”

Olian opened the event with a speech that set two themes that would be constant throughout the 90-minute event: construction and community.

After a warm welcome, Olian provided new updates on the Rocky Top Student Center’s new pub, On the Rocks. She said she hopes to see it open in “two to three weeks” with Filardi later adding that the university has a target opening day of Feb. 29, in order to open the game in time for the Quinnipiac vs. Yale men’s ice hockey game.

Beer and wine will be sold to anyone who is of age, but there will also be programming and events for all ages, according to Olian. She described it as a “great sport and information bar” due to a wide variety of screens throughout the facility.

Quinnipiac is also working on finishing its new master plan, which Olian revealed would be a 10-year vision of all capital improvements and major investments on all three Quinnipiac campuses.

Olian’s speech then shifted to the theme of community. She started by saying the university is pushing for “inclusive excellence” and announcing that 50% of all new College of Arts and Sciences hires will be professors of color.

“We become a more inclusive campus where at every level we have more diversity,” Olian said.

She also announced two new community-based initiatives: Bobcat Connect and
#QUKindness. Bobcat Connect is a Quinnipiac take on LinkedIn where undergraduate students can connect with mentors and alumni.

#QUKindness was originally announced in a video by Olian on Jan. 21, but Olian went into more detail on what she hopes to see.

The floor was then opened to student questions and concerns.

The first question, answered by Varholak, was about dining options. He said that the university is not looking to move towards “all-you-can-eat” board plans, also known as meal-swipe plans. According to Varholak, these types of plans can hurt food diversity that the current meal-plan style allows. He said instead that Resident District Manager of QU Dining Charles Couture is committed to providing a better dining experience.

A question then allowed Brown to talk about new majors. She said the university is looking at adding several new major offerings including, but not limited to, environmental sciences, environmental policy, data science, business analytics and applied business.

Brown also said that there are no plans to cut majors at this time, but part of the strategic plan will be to assess demand for certain degrees. She did guarantee that if a program is cut, there will be a clear “teach-out” program that will allow students to finish their degrees and graduate with them if their program ends up being cut.

Several other questions involving clarification on planning and policy were also asked. The university revealed it is reviewing how it handles students in its graduate school year of an accelerated degree program and are open to student feedback, that the president’s estate was nearing completion and would be used as an event space in addition to being future presidents’ home and that they are hoping to create more on-campus jobs that align with students’ career interests to help give them workplace experience.

The event closed with university administrators turning to the audience and asking questions of the community. They asked what about Quinnipiac makes students proud that the university should be aware of, and what is the best way to reach students with university messaging.

Students cited quality faculty, ample opportunity for resume building and career preparation as reasons for their pride in Quinnipiac.

“It’s really important to foster the dialogue that we saw here today, and the administration provided some resourceful responses,” said Sophia Marshall, SGA vice president. “This was a great opportunity for the education of the student body and to make sure the administration is aware of everyone’s concerns as well.”