General board gets new members, clubs get new funding 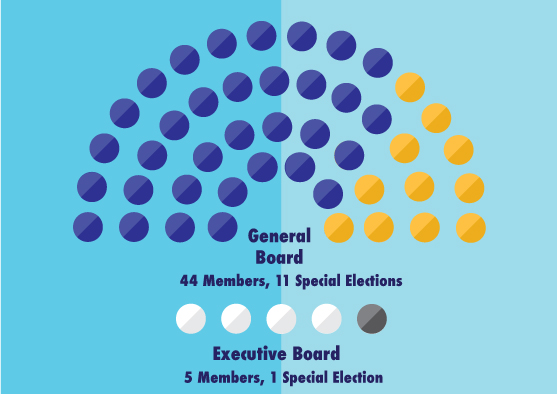 25% of SGA's general board is made up of senators who were elected in a special election.

The Student Government Association (SGA) held special elections to fill vacancies in its government and special appeals to spend unused money at its weekly meeting on Wednesday, Feb. 5.

Four senators, including former Vice President for Finance Glenn Adams who resigned in November 2019, were elected to fill vacancies in class cabinets.

Adams was also nominated to sit on SGA’s Judicial Board which oversees SGA. It will vote this week to decide if Adams will join the board.

“Only one special election senator has previous involvement in SGA before,” SGA President Austin Calvo said. “We have no connections to anyone else who got elected. It’s been random, run of the mill students who step up and jump at the opportunity. It helps break up club culture instead of reinforcing it.”

Special elections happen when a student steps down or is forced to leave SGA. Reasons for a senator to leave SGA include grades, conduct violations or personal reasons.

SGA also heard special appeals and approved over $55,000 in new fundings for 28 student organizations. New funding included over $25,000 to Q30 for new cameras and audio equipment, $4,200 to Big Event for day-of-the-event expenditures and $4,000 to the African and Carribean Student Union for their AfroCarribean Night.

Budget cuts have hampered special appeals in the past, but a 20% increase in March 2019 has allowed for much more funding. Calvo said that SGA underwent an audit and was able to find much more money than in years past.

“Q30 has requested that (funding) for the past couple of years, but we finally have the budget and it feels really good to fill that,” Calvo said.

Many clubs were given funding to allow them to attend conferences, hold new on-campus events and add on funding to large events on campus, such as the Black Student Union’s fashion show.