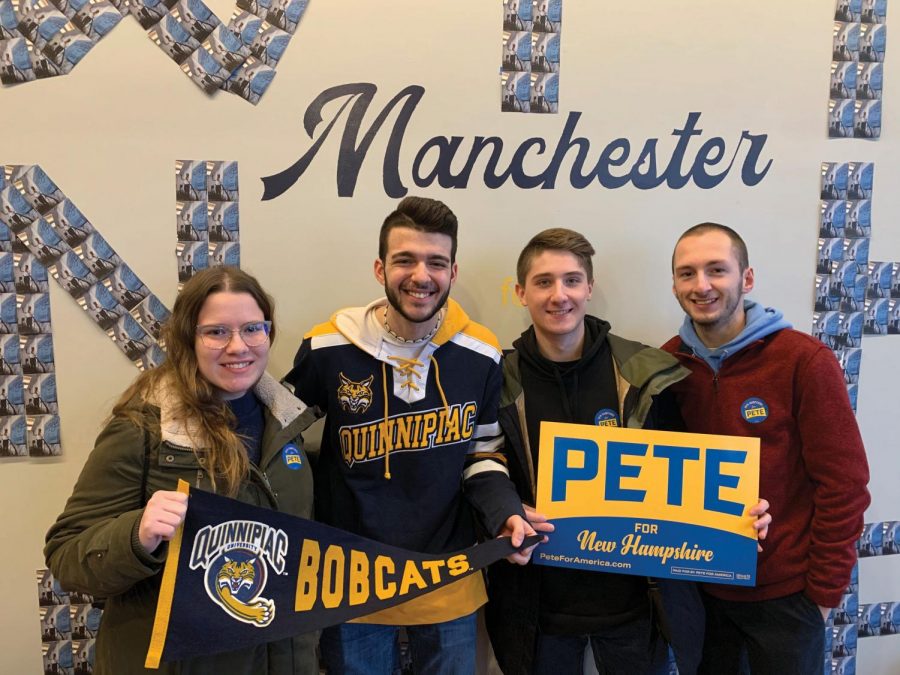 Nineteen students got to experience canvassing for presidential candidates who competed in the New Hampshire primaries.

Dr. Scott McLean, associate professor of political science, led students in his class, PO 362 — Presidential Election Campaign: The New Hampshire Primary, to New Hampshire on Jan. 31 to Feb. 3 and Feb. 7 to 12. Students participated in an intensive internship for presidential candidates of their choice.

Before they went up to New Hampshire, students hoped to meet potential supporters for their candidates, other volunteers, other presidential candidates and get an opportunity to learn something that can’t be learned by sitting in a classroom.

“My biggest hope with this second trip down to New Hampshire is to advance both my knowledge politically as a student of this particular social science and as a citizen of this country to better approach a future that is worthy for the children of our collective future,” said Ceylan, a sophomore political science and philosophy double major.

While Ceylan wanted to learn more about the nation’s politics, Pagan, a sophomore political science major, hoped to meet Warren because her campaign slogan, “Dream big, fight hard!” inspired her to go into politics in the future.

“These words motivate me to fight for my dreams,” Pagan said. “She inspires me to run for office one day.”

The tasks that students got to do were knocking on doors, talking to voters, putting up and holding signs to support the candidates at events. From this experience, junior economic major Tzimorangas said it was eye opening as there was no true consistency in who voters said their first-choice candidate was when he was talking to them.

“The voters of New Hampshire are extremely independent thinkers,” Tzimorangas said. “They aren’t going to let the results of Iowa determine how they vote, and they’re for sure not choosing a candidate based on the polls.”

Being in a campaigning environment, students said that it was a great opportunity to learn about the election process, see how campaigning really works and how different the real one is compared to seeing it through the TV.

“(An election campaign) is a large operation as well as a busy one. It could be quite tiring sometimes,” said Gorero, a junior political science major. “However, the passion that the volunteers provide gives so much energy to continue and persist.”

Tzimorangas said that working in the campaign made him feel like he was a part of something much larger than himself. He shared some of his experience from Buttigieg’s campaign.

“Our main goal is finding those who are either undecided voters, or those voters who are considering voting for Pete,” Tzimorangas said.

After Tzimorangas found those people, he explained why Buttigieg was the best candidate. Then, he made sure to listen to all the voters as they were saying what was important to them. If he came across voters who were for other candidates, he moved on.

Students didn’t just get the opportunity to work for their chosen candidates, they also got to attend events like town halls and the McIntyre-Shaheen 100 Club Dinner.

One of the events students got a chance to attend was The Democratic Debate on Friday, Feb. 7, at Saint Anselm College in Manchester. Annabi, a freshman political science major, was among one of the students who got to witness history.

“I couldn’t believe that I was sitting right next to the stage, just a few feet away from all of the candidates,” Annabi said.

After the debate ended, Annabi met Biden, talked to him, shook his hand and took a selfie with him. She said that she had to keep reminding herself that it was actually happening.

“I couldn’t believe I was making eye contact and conversation with (former) VP Joe Biden,” Annabi said. “It was just insane.”

As McLean said in a statement, this course gives students a once-in-a-lifetime experience to be a part of the 2020 presidential election. Gorero took this opportunity as a way to understand the issues at stake and ways to make a campaign strong as well as interesting and captivating.

“Every hour of experience in New Hampshire and serving in a presidential campaign is a significant learning opportunity that can have enduring effects and impart real experiences of communication, leadership and civic engagement,” McLean said in the statement.

McLean has been taking his students to New Hampshire since the 2000 presidential election.

“I’m so happy that Quinnipiac was able to have a class like this for the semester,” Tzimorangas said. “Because the experience is something I will always cherish.”