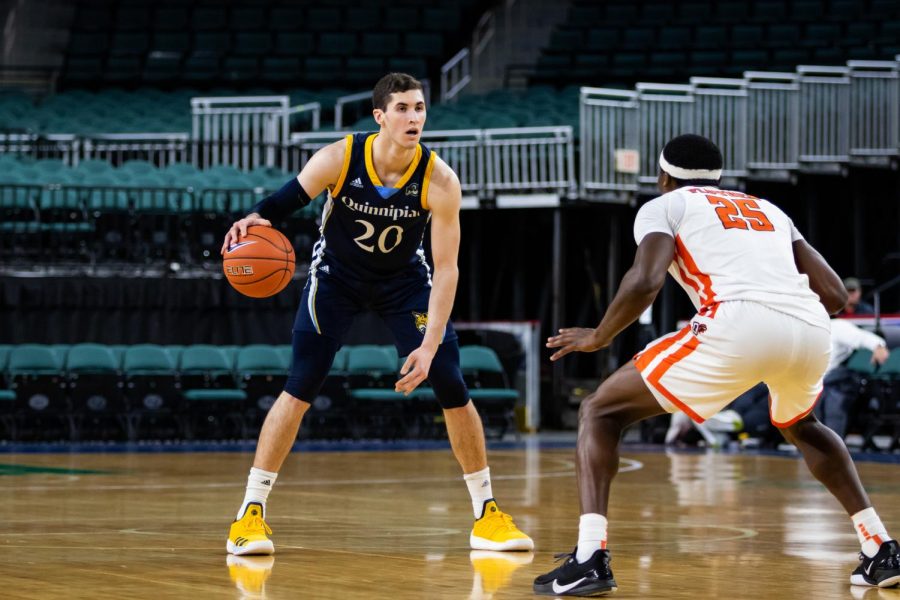 If you were to create a basketball player, you’d want them to be able to do everything on the court. You’d want someone who can score, make sharp passes and clamp down on defense.

Quinnipiac men’s basketball freshman forward Brendan McGuire is that player. At 6-foot-7 and 190 pounds, he possesses every tool that coaches dream to have on their team.

McGuire played four seasons of high school basketball at Chaminade High School in Mineola, New York. As a senior in 2017-18, McGuire averaged 10.9 points per game in 24 contests and showed his ability to shoot from deep as he drilled 34 3-pointers during the season.

“He’s a walking triple-double, and he can defend five positions,” Chaminade basketball head coach Robert Paul said. “(He’s) someone who’s not afraid of the moment.”

Paul highlighted two games that McGuire starred in during his varsity tenure. In his junior year, McGuire led Chaminade to a CHSAA championship in an 85-65 over Holy Trinity. McGuire scored 18 points en route to winning MVP of the game.

As a senior, Chaminade hosted Cardinal Hayes High School and won on a last-second shot. McGuire drove down the court and assisted senior Bobby Connors’ game-winner to beat Cardinal Hayes 65-62. Paul said that McGuire was by far the best player on the court in both games.

Coincidently, Paul knew that McGuire’s Quinnipiac teammate, sophomore guard Tyrese Williams, played on that Cardinal Hayes roster. He confidently stood by his statement that McGuire was the best player during that game.

Even with his great on-court abilities, what stands out is his work ethic and his commitment to getting better every day.

“I think his work ethic is another thing that separates him from most players as he treats every practice like a game and every game like a championship,” said Kevin Gunning, a former high school teammate and sophomore athletic training major at the University of Alabama. “He’s always ready to lay it all out there on any given night.

“Brendan is easily one of the most selfless players I’ve ever played with. He always looked to make the extra pass even if he was in a position to score it himself.”

Immediately following his graduation, McGuire played Amateur Athletic Union (AAU) with Crown Basketball during that summer and won the Live in AC championship.

He then took his talents to St. Thomas More for a postgraduate season before being recruited by Quinnipiac. He joined the Bobcats for the 2019-20 season as a freshman with four years of eligibility.

Paul profusely mentioned McGuire’s cool, calm and collected personality. Nothing rattled him to the point where it affected his play. His first time stepping on the Quinnipiac court for practice, he felt right at home.

“I was just ready to get to work,” McGuire said. “Excited to finally be playing with all my teammates and also knowing we had a lot of work to do to get better.”

McGuire started the season as a bench player with reserved minutes. He averaged 11.4 minutes per game (MPG) in his first seven games. He fought tooth and nail during practices to earn additional playing time.

The speed and intensity of the practices were an adjustment at the start of the season but because of how hard the players practiced, the game started to slow down for him.

“(He’s) definitely a guy that would make people better every day. I wasn’t sure how many minutes he would play, but I thought even if he didn’t play a lot in the games he would make us better in practice,” Quinnipiac head coach Baker Dunleavy said. “He plays defense, he passes, he does a lot of things that don’t involve scoring.

“I think he’s such a natural fit with our roster, and that’s why he’s been earning so many minutes right away. We got a lot of guys on the team that need the ball and are good scorers. He gets them the ball, and he defends. He’s a round peg round hole good fit.”

Mentorship and guidance served a major role in McGuire’s development. He praises Paul for strengthening his foundation and developing his all-around game to maximize his abilities on the floor. Paul loved McGuire’s ability to lead by example during practices and games.

“Coaching him was fantastic. He’s got so many qualities that you want in a player, and he’s a great teammate,” Paul said. “He’s got an outstanding work ethic and is such a competitive spirit.”

Within the Bobcats’ team itself, McGuire appears to have a new mentor, junior guard Rich Kelly. Since they both spend the majority of the game with the ball in their hands, McGuire loves to watch how Kelly gets everyone else on the team involved on top of being the team’s leading scorer.

“It’s like (Master) Shifu and Po from Kung Fu Panda,” Kelly jokingly said. “He’s pretty smart and knows a lot. I’m sure I don’t tell him too much he doesn’t already know.”

McGuire’s hard work and selflessness have begun to pay off. Over his last 11 games, he averaged 28 MPG and started in nine.

His recent stretch of play confirms his selfless personality, as he currently stands at fourth in the MAAC for assist percentage — an estimate of the percentage of his teammates’ field goals he assisted on while on the court, according to Basketball Reference.

“Brendan has taken that approach of the everyday mentality. He’s continuing to get better. He didn’t play much earlier in the season, but he stayed ready and kept working hard,” Kelly said. “When his number was called, he was ready to go. We’re a completely different team with him on the floor. He’s going to be a big piece of what we do this year and for years to come.”

Work ethic is the top priority for McGuire. He continuously wants to improve in every aspect of the game. To him, picking up assists is just as important as limiting turnovers, and his shooting ability mirrors his ability to strip his opponents’ ability to create quality shots.

With only eight regular season games remaining, there is only one thing on McGuire’s mind.

“Just want to keep getting better,” McGuire said. “The regular season is obviously important, but we want to be at our best for the conference tournament.”