Taylor Herd has enjoyed a lucrative basketball career despite adversity 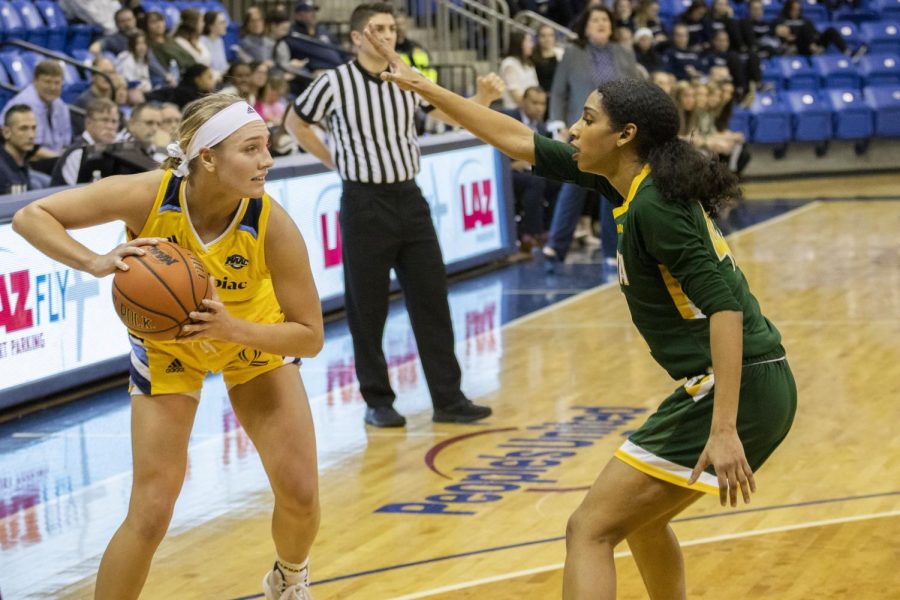 Taylor Herd, one of the most accomplished Quinnipiac women’s basketball players that the program has ever seen, is less than five months away from graduation. She’ll leave behind a potent legacy decorated with an abundance of hardware.

Just four years ago, however, Herd was simply trying to secure a college basketball scholarship. She suffered a season-ending ACL injury in both her junior and senior years of high school.

College coaches were uncertain if they should continue recruiting her because of the injuries. Quinnipiac, however, did not waver, which led to Herd’s commitment to the Bobcats’ program.

“It definitely stalled my recruiting process,” Herd said. “A lot of coaches that had either offered me or showed interest in me, didn’t necessarily pull them back, but there was hesitation to go forward with the recruiting process. And that’s, I think, the main reason I chose Quinnipiac and their coaching staff because they took that gamble on me and took that risk to not know how I was going to come back. My work ethic and their belief in me is what got me to playing minutes now.”

Herd returned to the court for the first time in two years on Nov. 16, 2016 against Holy Cross. She said she was not herself when she first came back, as she had to get back in the rhythm of basketball after being away from the sport for so long.

“I think it was just me catching up to the pace of the game and also making sure that my leg was just as strong as all these other girls’ who weren’t coming back from injury,” Herd said.

In her sophomore season, Herd became a key contributor to the team, averaging 6.0 points per game in 33 games and 25 starts. A year later, she became the second player in program history to win the MAAC Sixth Player of the Year award, joining Maria Napolitano, who won it in 2014-15.

Herd appreciated the award and the support that came with it, especially from the rest of the conference and its coaches. She recognized how crucial her role was off the bench but was ready to take the next step forward in her senior year.

“That energy and spark I could prove for my team wasn’t going unnoticed,” Herd said. “I think it was even more of a push especially this year to keep going and accept a new role and work for more individual goals, more team goals. So it was really just extra motivation for me.”

Herd also has an impact off the court. She travels with her teammates to community schools to read and talk with local children.

In the Quinnipiac community, Herd is the Athletic Senator for the Student Government Association. Along with that, Herd assists in the planning and development of Boomer Bash. This event focuses mainly on local families and is hosted by QU Student Athlete Advisory Committee. Herd is also involved in assisting with housing for all student-athletes.

This past December, Herd was recognized by Hartford HealthCare and News 8 with the Hartford HealthCare Courage Award. The award is presented to 12 student-athletes who attend Connecticut colleges that have shown courage when they face adversity. Herd was named early in the first recipient class this year.

“It was a time for me to reflect on all the support I have around me and how blessed I am to have the people (that I do) in my life,” Herd said. “That wouldn’t happen if I wasn’t at Quinnipiac, so I think it was a day to step back and be appreciative of all the highs and lows of the season, and everyone who’s been there along the way.”

Herd was also nominated for the Senior CLASS Award which is given to student-athletes that use their platform in athletics to serve as leaders in their community. Quinnipiac senior forward Jaden Ward was not shocked to hear of Herd’s nomination. To be eligible for this award, you need to have achievements in four areas of excellence: community, classroom, character and competition.

“She deserves every single one of them,” Ward said. “She’s a very hard worker, very passionate and very strong.”

Along with that, Ward is impressed with the effort that Herd brings to the court despite the personal adversity she is dealing with outside of basketball. Herd’s father had not been able to travel to her games since the end of her freshman year.

Even with the uncertainty surrounding her father’s condition, Herd was determined to not allow anything to keep her down or get in her way. Herd still doesn’t get see her family as often as she did before, but she got the chance to when the team faced Central Florida on Dec. 17.

With her father unable to provide in ways he could before, Herd had to take on more responsibility. While her mom was at the hospital with her father, Herd moved her younger brother into college.

Living three hours away from home with the uncertainty of her father’s heart transfer process was a challenging task for Herd. After a silent heart attack in 2017, Herd’s father’s health continued deteriorating, leading to his unfortunate death earlier this year.

The team atmosphere, her accomplishments and the program’s success has helped Herd deal with her off-court adversity.

“The thing that impresses me the most about Taylor is how strong she is,” Ward said. “She has a lot of things going as everyone knows in her personal life, and she always brings it on the court. She’s very good at dealing with everything that’s going on in life and just helping everyone out there and being there for everyone. She’s an all-around great person.”

Off the court, Ward described Herd as a fun and adventurous person who loves to dance, watch basketball, go to Dunkin’ and study journalism.

Quinnipiac redshirt junior guard Shaq Edwards is in her second year with the women’s basketball program. Still, she easily sees Herd leaving a legacy at Quinnipiac where nothing off the court will affect her play.

“I see her leaving a gritty type of legacy,” Edwards said. “Someone that won’t allow factors in her off-the-court (life) come in on the court.”

Herd interned with the Los Angeles Sparks, a WNBA team, in the summer of 2019 as a public relations and communications intern. Because of this, she was inspired to focus more on the less important areas of her game.

“It was surreal watching them live,’’ Herd said. “They are so skilled and so athletic, and they just have that different demeanor and confidence in their game. They’re just so smart and watching them live inspired me to just get more film in and see what I could do to focus on little areas of my game that I haven’t considered before.”

Quinnipiac head coach Tricia Fabbri’s daughter, Carly, had a similar situation to Herd, as she suffered ACL injuries as well. It was comforting to Herd knowing that someone has already been through that process. For this reason, and many more, Fabbri inspires Herd.

“I most admire her fieriness and her demeanor as a woman in sports,” Herd said. “It’s really inspiring to me, especially since I want to eventually become a woman in sports like sideline reporting. She’s really been a great example for me. So, just trying to follow her lead in that sense.”

Herd is a three-time MAAC Champion and played a key role in the team winning 52 straight conference games, which ranks as the 10th longest streak in NCAA women’s basketball history.

In less than five months, Herd will graduate from Quinnipiac. She’ll leave with All-MAAC team nominations, the Sixth Player of the Year award, three MAAC championships and potentially a fourth this year.

“I want to be someone that people miss because I was there for them in moments no one else was there for,” Herd said. “You know they miss me on the court for my vocal leadership or whether it’s in the weight room they’re like, ‘Oh, I miss Tay because she was always working hard.’ I want to be remembered for the examples I tried to set for my teammates.”