Shakira and J.Lo’s underlying messages at the Super Bowl

Understanding that this halftime show was more than just a concert 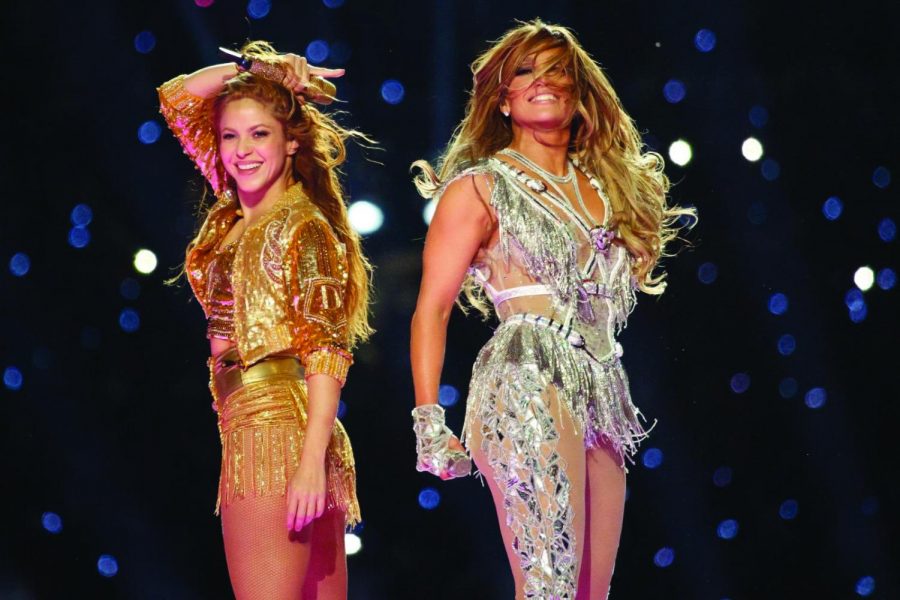 The halftime show had over 100 million viewers, according to a statement by the NFL.

The Super Bowl halftime show — a concert that has featured artists such as Prince, Bruno Mars, Katy Perry, Beyonce and Justin Timberlake in years past — is the moment where everyone, avid football fans and those of us who watch the Super Bowl for anything but the actual game, come together to enjoy the approximately 12-minute concert.

This year, Jennifer Lopez and Shakira performed side by side, giving viewers a show full of medleys of their hit songs, amazing costume changes, a children’s choir and a beautiful duet between Lopez and her daughter, Emme, as they sang a rendition of Bruce Springsteen’s, “Born in the USA.”

What 102 million Americans saw while watching the halftime show this year was not just a regular musical showcase put on by two Latina superstars — it was a show full of artistry and athleticism that helped address the pressing issue of there being a cultural division in the United States. The show also included two other well-known Spanish-speaking artists: Puerto Rican rapper, Bad Bunny, who performed with Shakira, and Colombian reggaeton singer, J Balvin, who joined Lopez on stage.

Lopez and Shakira made history at this year’s Super Bowl halftime show by making it the first time two Latina women headlined the show, but afterward, people were not talking about this pivotal moment in history — people were upset by how these two women performed through their forms of dancing. Parents were complaining that their young kids were watching a woman pole dance wearing a lace bodysuit. Some others believed that the dancing by both Lopez and Shakira was “scandalous.”

However, what people do not know is that both of their performances meant something to them and weren’t just a way for them to show off.

Shakira is half-Lebanese and half-Colombian and has dedicated her career to her cultures. This Super Bowl performance allowed her to bring it all together in one place. Through her dancing, instruments, costumes and more, Shakira’s performance represented her life and career.

“I was born and raised in Colombia, but I listened to bands like Led Zeppelin, the Cure, the Police, the Beatles and Nirvana,” Shakira said to Faze magazine. “I was so in love with that rock sound, but at the same time, because my father is of 100% Lebanese descent, I am devoted to Arabic tastes and sounds.”

And what was the tongue movement that went viral on social media? That is called a Zaghrouta, which is a tongue vocalization that is common in cultures, such as Lebanese and Colombian. It is a way to express excitement and joy and is used a lot during Carnaval de Barranquillaw which is a festival in Shakira’s hometown of Barranquilla, Colombia.

Shakira’s hips really don’t lie, but where she learned how to dance was interesting. Shakira told Rolling Stone that she ate at a Middle Eastern restaurant with her father once and heard the Doumbek drum and fell for belly dancing. She now, to this day, combines belly dancing with Latin dance and has created her own style.

At the Super Bowl, Shakira also performed two Colombian dance styles. She, along with her dancers, performed champeta during the song, “Waka Waka.” Champeta originated in Colombia and is a form of folk music and dance. Before that song, she danced mapalé, an Afro-Colombian style of dance that was brought over by slaves, representing the fishermen that had a long day of work. This allowed her to highlight what makes her music special for her.

Lopez began her portion of the show with pole dancing, which was intended to tribute the skills she picked up working on the film, “Hustlers.” Although people have said that this was inappropriate, the choreographers of her performance, husband and wife duo Napoleon and Tabitha Dumo, insisted they wanted to highlight her athleticism and acrobatic skills that are involved in this type of dancing.

“Now, obviously you can see (pole dancing) in one way because of obviously the places you can see this done,” Tabitha said. “But it’s evolved into such an art form.”

The entirety of Lopez’s performance was carefully created by her choreographers. They wanted to have a balance of her hit songs, while also giving the message of honoring her Puerto Rican heritage and encouraging viewers to find their own voice.

“A voice as a woman, as a Latino, as a mom, inspiring women of the next generation to get loud,” Tabitha said to Buzzfeed News.

One of the highlights from Lopez’s performance was near the end when her daughter, Emme joined her along with other children and started singing “Let’s Get Loud” from inside lighted cages. Lopez came out wearing a custom Versace feathered coat that looked like the Puerto Rican flag as Emme sang a part of “Born in the USA.”

“I think it started, from a musical standpoint, having ‘Born in the USA’ in there for a little moment, and it just was a natural evolution,” Tabitha said to Buzzfeed News. “We had a great partnership with Versace and Rob (Zangardi), her stylist, saying, ‘Let’s just do this in a way that everyone feels that American pride.’ I don’t think we were trying to be heavy handed with anything. I think we were just celebrating all that is beautiful about this country — Puerto Rico being part of this country.”

The day after the Super Bowl, Lopez referenced the cages the children were singing in.

“All I want my girls, the little girls on stage with me and all over the world to know is how to use their voices and be proud of everything they are,” Lopez wrote on Instagram. “Other people can try to build walls, keep us out or put us in cages. We are proud to recognize that all of us together are what makes this beautiful country truly great.”

While both performances, Shakira’s and Lopez’s, have been receiving some hate, it is important to remember that they showed their roots, reminding us that the Latino culture is as American as the Super Bowl is.