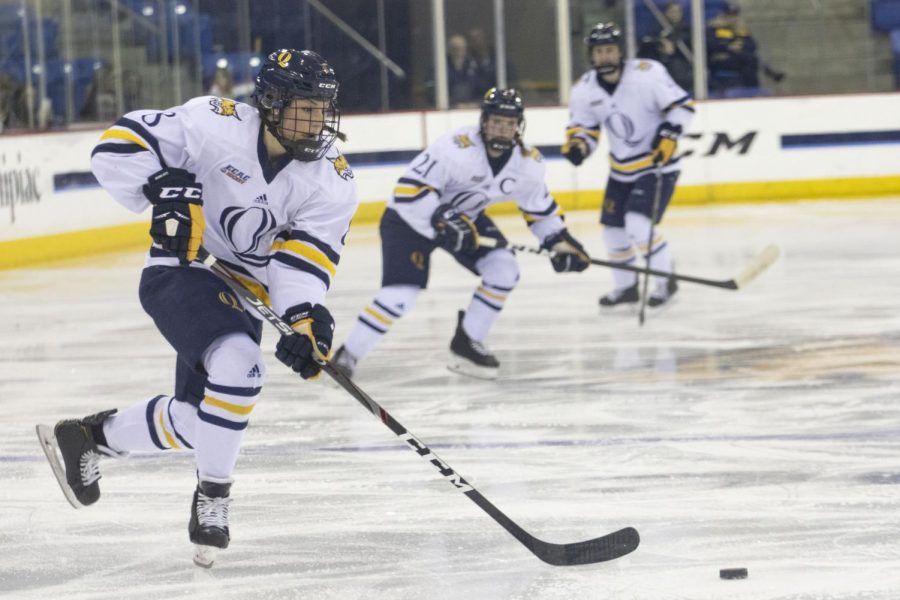 Right from the first puck drop, this game was all Quinnipiac. It spent the first several minutes cycling the puck and peppering RPI freshman goaltender Eva Nystrøm with shots. Quinnipiac forced turnovers and icings throughout the entire first period.

“We came in knowing we were coming in and playing a pretty solid goaltender. Getting as many pucks on her as possible was the goal,” Quinnipiac sophomore forward Lexie Adzija said. “I think for us this year we’ve proved that we can get on the board first and keep the lead, or we can come back from being down. It was important to get the momentum but if they had scored first, we would have been okay.” 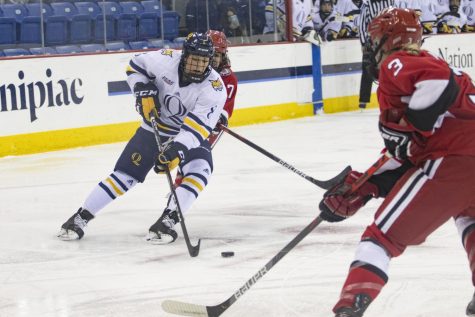 Adzija put Quinnipiac on the board late in the first period after rifling a shot past Nystrøm. The beauty behind the goal came from the Quinnipiac zone-entrance as junior forwards Taylor House and Taylor Girard completed a double drop pass play leading up to the goal

“The first couple of times I was definitely trying to get a shot, again just shot mentality, especially on the power play,” Adzija said. “The last one was just a smart shot to the pad because they weren’t really getting through.”

Quinnipiac continued to dominate throughout the second period as it would tack on another goal in addition to Peart’s.

Lundblad shined in the second period, beginning with a tremendous play in the defensive end by stick checking a defenseman on the point which led to a breakaway where she squared up and slid the puck through Nystrøm’s five-hole.

“It’s honestly all we’ve been talking about this season. (Turner) ingrained it in us, and it’s working out,” Lundblad said. “We’ve been putting up a lot of goals lately and taking it away on (defense) and turning it into offense quick.”

Late in the second, Lundblad portrayed her creativity with a series of moves during a one-on-one rush.

She played the puck forehand to backhand, sliding it under the defender’s stick, followed by playing the puck with one hand and windmilling it over the defender pulling it back to her forehand. She fired a quick snapshot to the net and Nystrøm denied the opportunity with a great pad save.

Laura Lundblad pulled of a one-handed windmill dangle against RPI and nearly puts it past the netminder pic.twitter.com/UXtbQgkZ2z

The third period was more of the same from Quinnipiac as it sent multiple shifts firing shots at the freshman goaltender.

RPI finally breached the Quinnipiac line and got on the scoreboard off a power-play goal from junior forward Lauren Severson.

Despite the late attempt at a comeback, Lundblad single-handedly shut the door on RPI’s window with not just one, but two third period goals. The hat-trick goal game with just 10 seconds remaining in the game.

“It was so exciting. I was just amazed that it happened. Ten seconds left in the game and the puck just settled up against my stick in front of an open net,” Lundblad said. “Doesn’t get any better than that.”

“We’re incredibly happy with our weekend,” Quinnipiac head coach Cass Turner said. “We really showed our depth, we had people stepping up and making plays and putting pucks in the net. That’s exactly what we want at this time of the year. Everyone was ready to play at their best, and it’s nice to score 11 goals.”

Quinnipiac will head to Potsdam, New York onN.Y. Feb. 8, in a contest against No. 7 Clarkson in an ECAC Hockey matchup.