The Quinnipiac Bobcats (11-9 overall, 8-3 MAAC) were proving to be one of the heartier teams in the MAAC. Their four-game win streak included a victory over third place Fairfield, and three of those games were on the road.

Siena was also on a four-game winning streak, but the history between the two teams was driving it to take home the win. Quinnipiac was a perfect 14-0 against Siena in its history. In fact, the Bobcats had never let their wins against the Saints be decided by single digits.

“They’ve never beaten us before, and they had this fire, this gut feeling that they wanted to beat us and I don’t think that we had that,” sophomore guard Mackenzie DeWees said. 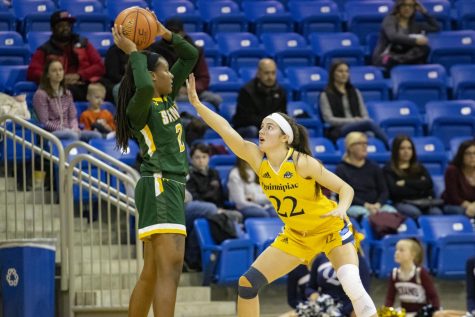 Siena’s strategy in this one was to tire out Quinnipiac as much as it could, letting the shot clock fall to single digits on nearly every possession. The other possessions featured bursts of speed from junior guard Rayshel Brown, who burned the Bobcats’ defense on the fast break.

Many of Siena’s early offensive possessions turned into players trying to take on senior forward Paige Warfel in the post which ended in multiple failed layups.

Offensively, Quinnipiac didn’t even seem to miss freshman forward Mikala Morris who was inactive. The team was still getting to the rim and sizing up against the Siena defense, contributing to its four-point lead at halftime.

DeWees was the offensive star for Quinnipiac in the first half and has evolved into a potent weapon for the Bobcats, as she has the ability to drive downhill and find the open lane. Her vision on the floor is also an important aspect of the game, as she was able to find open passes in a tight Siena defense.

DeWees led the Bobcats to a 34-30 lead, grabbing five rebounds and scoring eight points with three assists by halftime.

The second half was a different story. The Saints’ aim to tire out the defense began working. That’s when Brown really opened her bag of tricks.

She broke out the eurosteps, the downhill speed, the hesitation finishes. Brown became as hot as can be in the second half, breaking through the Quinnipiac defense at any given chance.

Finishing the game with 18 points, Brown was the leader of the comeback that saw the Saints dig out of a deficit that was as high as 11 points.

“We knew they’d be a handful,” Fabbri said. “The hottest team in the MAAC just came in here and took it to us.”

After the tough loss, DeWees reminded herself that with the tournament looming, it’s important to make the most of the team’s opportunities.

Quinnipiac plays next on Feb. 21, on the road against the fifth-place Manhattan Jaspers.