Quinnipiac wins Game 1 of the Battle of Whitney Ave. 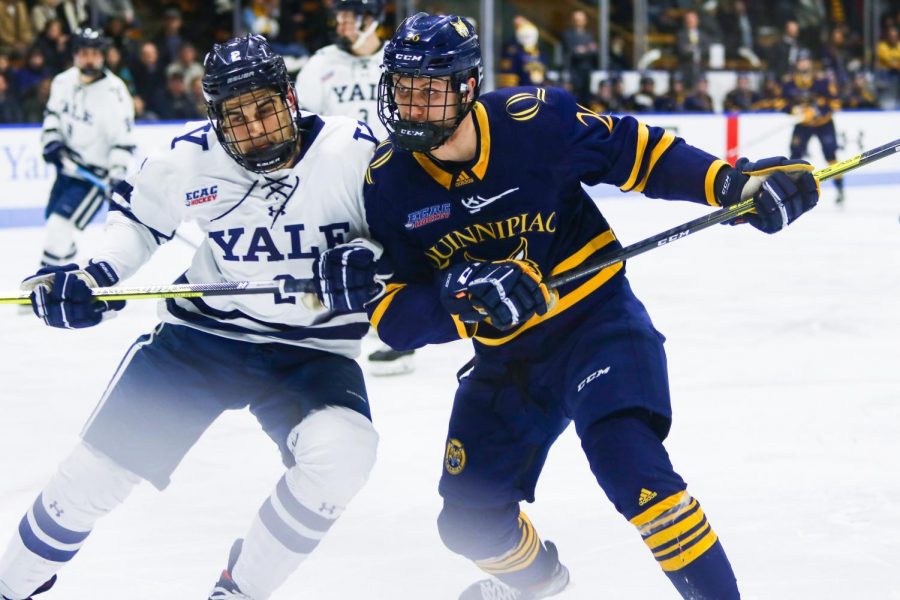 As a battle ensues in the corner, Quinnipiac sophomore forward Ethan De Jong swoops in and wraps the puck around the net toward Yale senior goaltender Corbin Kaczperski. Junior forward Odeen Tufto pounced on the loose puck and poked it past the goalie.

Tufto jumped into the glass as his teammates flooded the ice and followed suit.

”Felt awesome,” Tufto said, smiling. “Seems like they’re not going in as much as I’d like to in previous years. The (overtime) winner felt pretty good.”

The opening minute was pure pandemonium as both teams were up and down the ice. It only took Yale 55 seconds to break the tension and put one on the board.

Yale senior forward Luke Stevens broke out of the zone with a pass to junior forward Kevin O’Neil. O’Neil took the puck wide on his backhand and threw it at the low slot to freshman forward Rowan Hayden. The puck deflected off Hayden and found its way past Quinnipiac junior goaltender Keith Petruzelli.

Despite giving up an early goal, Petruzelli made a brilliant pad save at the midway point of the period keeping it just a one-score game.

“We were a little better late in the first period. Got to give yale credit, they were hard they were tough,” Pecknold said. “Keith made some big saves for us in the first, kind of hung around a little bit and got out of the first only down by one.”

On the other end of the ice, Kaczerpski made two incredible glove saves while killing a penalty. One of them was a windmill and the other was a wide-open slapshot at the buzzer.

The second period consisted of both teams trading blows with unsustained pressure.

Yale’s first power play was unsuccessful due to Quinnipiac’s willingness to put bodies on the line and block four chances from reaching Petruzelli.

Late in the second period, Quinnipiac senior forward Alex Whelan dangled past a Yale defender and fired a shot over the glove of Kaczperski to tie the game up at one.

Quinnipiac stormed into the third period and dominated the first few minutes. Junior forward Joe O’Connor took advantage of a untimely line change by Yale and received a stretch pass in on a breakaway. After Kaczperski stopped the original shot, O’Connor found the rebound and tapped it home.

“Felt unbelievable, especially here at Ingalls, growing up here,” O’Connor said. “Finally back on the score sheet and hopefully I’ll get one tomorrow.”

With his first goal in 18 games, you could see the excitement in his face during his celebration as he gripped his jersey and started waving the Bobcat logo to the crowd.

Unlike the second period, both sides would spend multiple shifts in a row in the attacking zone creating outstanding opportunities.

Yale took advantage of a series of missed passes by Quinnipiac and would catch Petruzelli scrambling back to his crease. The original shot was kicked out to senior forward Evan Smith who backhanded the puck up and over a diving Petruzelli to tie the game with just under three minutes remaining.

Pecknold challenged the play for a headshot earlier in the shift but the officials determined it was a good goal.

“They were reviewing what I thought was a five-minute major,” Pecknold said.“It’s hard with the camera angle, they didn’t call it. If the call goes our way we get a five-minute power play and the goal comes off.If it doesn’t go our way, I just felt like there was 2:47 left, we got to dig in we got to be more resilient. Get more in our battle mode and attack the adversity.”

Because the goal counted, the game went into overtime. It took only 18 seconds for Tufto to net the game winner, giving the Bobcats a 3-2 win.

Quinnipiac will travel to Rhode Island to take on another ECAC Hockey opponent Saturday, Feb. 8, as the Brown Bears play host to the Bobcats.