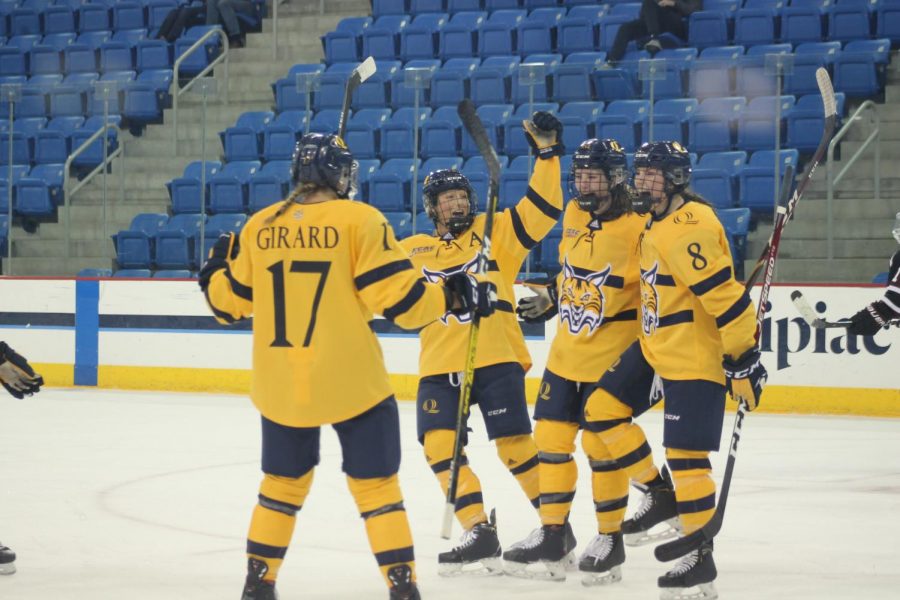 Not often can a team say that it put up more than four goals in one game. The Quinnipiac women’s ice hockey team did that, plus more, as it trounced the Union Dutchwomen 6-2 at Frank Perrotti Jr. Arena Friday night.

The Bobcats are now 21-0-1 when playing at home against the Dutchwomen.

“We’ve been talking about what we want this year,” Quinnipiac head coach Cass Turner said. “At this point, every game feels like a championship game, and it takes that kind of effort and commitment and detail to really truly be hard to play against. It was a strong game and I’m proud of how we played.”

The Dutchwomen did not go down without a fight, when in the first period they came back with a score of their own a couple minutes later from freshman forward Leah Herrfort.

The Bobcats went on a frenzy in the second period. Coming off an unsuccessful power play, House drove toward the net and put a shot on Union senior goaltender Amelia Murray. Before she could get in position for another save, House backhanded the puck into the net to give the Bobcats a 2-1 lead.

Fewer than 10 minutes later, the Bobcats came back with another goal, this time from freshman forward Sadie Peart on a crisp pass from junior Grace Markey from behind the net.

Towards the end of the second period, the Bobcats struck for the third time in the period with a goal from House, notching her second goal of the game, pushing the lead to 4-1.

The Bobcats struck two more times in the game, the first from senior defenseman Kati Tabin, before Union came back with a goal of its own from junior defenseman Megan Ryan. Freshman defenseman Kate Reilly put the icing on the cake as she scored her first career goal, putting the Bobcats up by four.

The Bobcats ended the game with a total of 46 shots on goal, compared to 19 for the Dutchwomen — something that the team has been practicing throughout the season.

“I think it’s always emphasized,” House said. “We have goals going in every single game and one of them was to get 35 shots, and today, we came in wanting five shots every five minutes and we got close to that, but without even hitting that goal, 46 is still plenty.”

Turner talked about how creating and building from one chance is important for the team.She added that if the team is smart and does its job on both sides of the puck, the team will be rewarded with more opportunities to score.

The Bobcats will look to keep their winning streak alive as they play Rensselaer Polytechnic Institute on Saturday, Feb. 8, at 3 p.m. at Frank Perrotti Jr. Arena.