Nothin’ but Nylon: Establishing an identity

Bobcats need to lock in defensively to achieve championship success 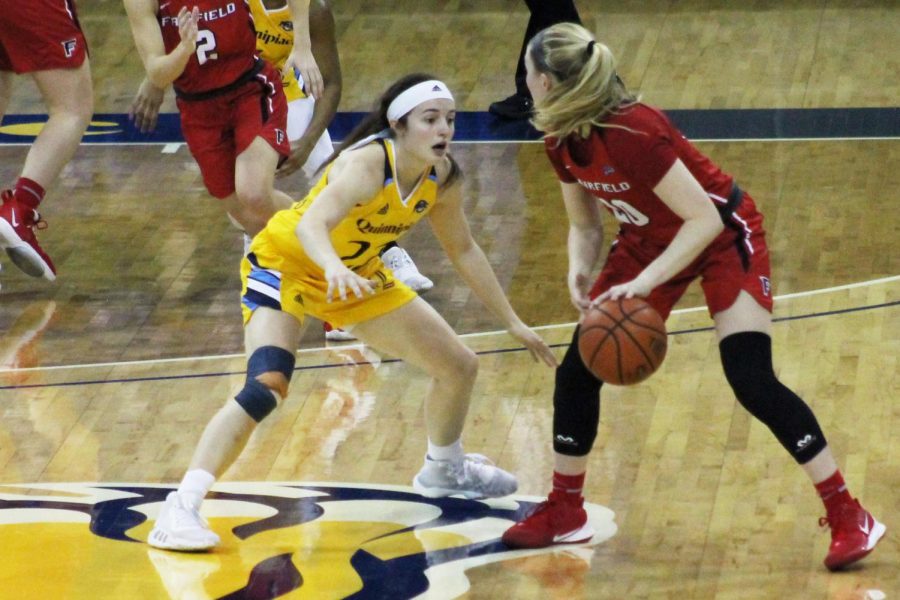 The path to success hasn’t looked particularly challenging for Quinnipiac’s women’s basketball team since it joined the MAAC in 2013-14. Head coach Tricia Fabbri has led her Bobcats to the MAAC tournament championship game every year since joining the conference, winning in four of her last five appearances.

En route to those championship appearances, the Bobcats experienced a 52-game winning streak against MAAC opponents that spanned the course of three seasons. They’ve won their four championships by a combined 58 points, making their average margin of victory a whopping 14.5 points, including a MAAC record 30-point win over Marist last year.

But this year, the Bobcats have started to experience setbacks. As with any great dynasty, there are going to be challenges along the way. Even Tom Brady experienced more challenging years that saw him come up short of appearing in the Super Bowl. 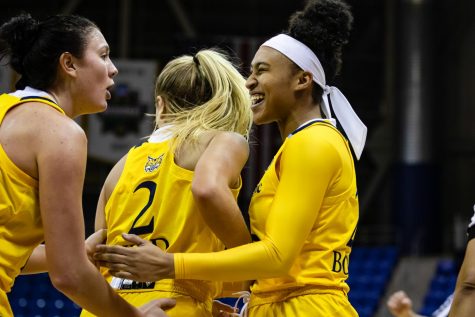 Morgan TenczaIn order for Quinnipiac to find success as it did in recent years, it will have to consistently play good defense.

True, the Bobcats’ conference winning streak was snapped with a sudden and heavy four-point loss to Iona in the first MAAC game of the year. For the first time in some time, Quinnipiac is fourth in the conference, and the gap to first place is pretty significant. Rider, currently 10-0 in the conference and an impressive 17-2 overall, pose a threat the Bobcats haven’t seen in a long time.

But just because there’s more adversity doesn’t mean this team will simply fold and accept defeat. Fabbri is a relentless winner, and so are her players. She’s worked hard to build a culture of championship success — nothing less — in her time at Quinnipiac. That isn’t about to slip away.

This year may not be as easy, the process might not be the same, but that doesn’t mean the ending will be any different. The Bobcats simply need to identify new ways to win games, and that can start with defense.

It’s a widely known saying, “defense wins championships.” For Quinnipiac to claim its fourth straight MAAC tournament championship, it’ll have to start there. The Bobcats are currently giving up 68.3 points per game, which would be the worst mark since the team joined the MAAC.

The problem with defense isn’t that the Bobcats aren’t good at it. They’ve shown plenty of times this year that they can be great a defensive team. The Bobcats held Hartford to just 50 points and forced 25 turnovers earlier this season, proving they can be elite defensively when they need to be.

Individually, they’ve shown they’re capable as well. As the clock was winding down during the matchup against Iona on Saturday, Feb. 1, senior forward Paige Warfel switched onto a smaller opponent. Typically, guards use speed and agility to create shot opportunities against bigs.

Warfel didn’t let her foe have it so easy, though. She shuffled her feet as her matchup dribbled toward the basket, through the lane, cut back to the left side of the rim and retreated again from the paint. Warfel did an incredible job defending in that situation, and she’s not the only big who’s exemplified such defense this year.

So what, then, is the problem? Right now, it seems to be consistency. The Bobcats have been hit or miss this season, typically playing either a great game or not bringing it at all. The differences in their performances — and their opponents’ — in wins and losses this year is eye-popping.

In wins this year, the Bobcats are holding their opponents to a combined 37.9% from the field, a great mark defensively. The highest an opponent has shot against Quinnipiac this season is 50%, which was the Iona game this past week, in which the Bobcats forced a healthy 23 turnovers.

In losses, their opponents’ 37.9 field-goal percentage skyrockets to 49.3%. The Bobcats are 1-6 in games in which their opponents shoot 49.3% or better, a dreadful but expected mark. No team should win allowing that kind of efficiency on the defensive end, the one win is remarkable in its own right. The one win was against Iona on Saturday, and it wasn’t random that this game is the one they pulled out.

“We wanted to make sure that we pressured the ball,” senior guard Shaq Edwards said. “We tried to make sure we got every loose ball, that we got rebounds, steals, everything to make us turn our defense into offense.” 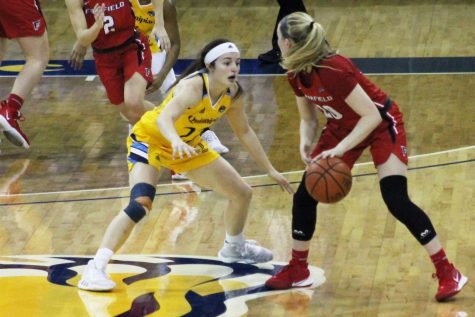 That kind of hustle is essential if the Bobcats want to achieve their goals this season. To win the MAAC tournament for a fourth straight year, the Bobcats can’t rely on offense and talent. They’ll need to put in that kind of effort — the effort that resulted in 23 forced turnovers to negate the Gaels’ efficient shooting — to beat the best of the best this year.

There’s something to be said about recent performance entering the playoffs and how it impacts a postseason run. Entering the tournament hot could be essential for this team that doesn’t have the same upper-hand it’s had in years past.

When this team plays well, it plays really well. The average margin of victory this year is 13.7 points. Sure, that’s the smallest margin of victory since 2015-16 when it was 12.6, but that’s not a small margin.

When the team plays poorly, it’s not typically close. The average margin of defeat this year is 15.3 points, proving that the Bobcats typically aren’t in the games they lose.

Still, there have been close games, and learning to close out those close games could prove to be essential as conference play continues. Quinnipiac won by four points against Iona on Saturday, marking the fifth time a game has been decided by five or fewer points this season.

“We were able to keep our poise, answer in a back-and-forth game and pull this one out,” Fabbri said. “You’re going to have games like this … and I think it really shows, again, our overall progression. Being able to withstand a team storming at you, pull out a win, that’s a good sign.”

In games decided by five or fewer points, Quinnipiac is 2-3. It’s not a bad mark, but not on par with recent years. Dating back to when Quinnipiac joined the MAAC, it’s gone 4-2, 0-0, 4-2, 4-2, 5-1 and 2-2 in games decided by a five- point margin or smaller. The team came up short the one other year it failed to surpass .500 in these games, so closing out close games becomes even more important.

At the midway point in MAAC play, the team is 7-3 in the conference, the fourth best mark of any MAAC team this season. Just because the Bobcats aren’t putting up the same numbers they have been for the past few years doesn’t mean there’s a need to worry.

It can be used as fuel, though, and if the Bobcats want to come out on top of a conference that looks tougher than it has in years, they’ll need some form of extra motivations. This could be it.