Murphy’s Law: Anything can happen 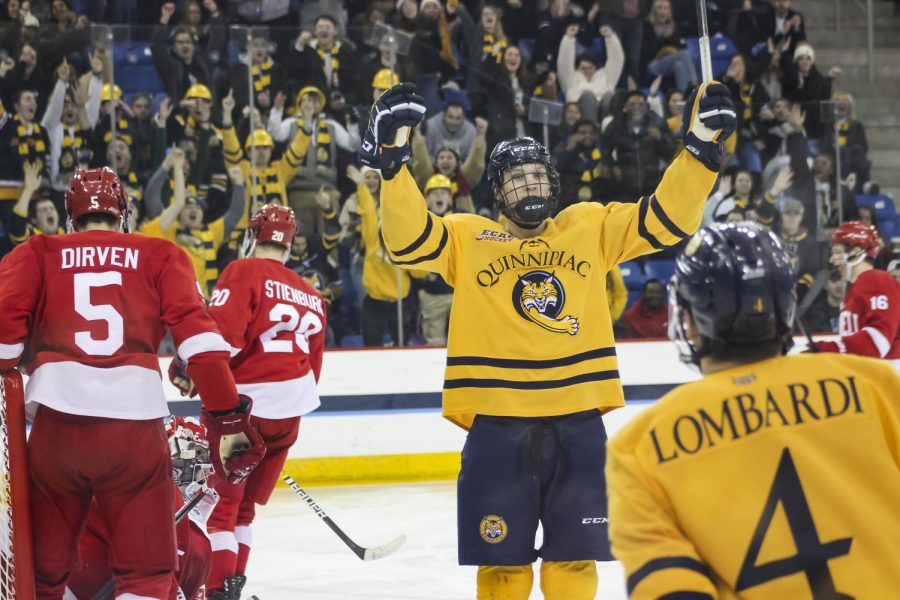 The Quinnipiac men’s ice hockey team’s 5-0 shutout against Cornell meant a lot of things. It meant that Quinnipiac has the ability to play, and thoroughly defeat, any team on any given night.

It meant a critical two points in the ECAC Hockey standings, in which third to seventh place are separated by a mere three points.

It also meant a massive swing in Quinnipiac’s favor in the Pairwise rankings.

Don’t just listen to me. Listen to the man at the helm of the Bobcats.

“(The win against Cornell) clearly would be the biggest win for us so far,” Quinnipiac head coach Rand Pecknold said.

The Bobcats sit in the 14th spot in the Pairwise rankings and in the 16th spot in the USCHO rankings. They are right on the cusp of getting an at-large bid for the NCAA tournament, but also just as close to missing the cut.

Looking at the remaining eight games on the schedule, it’s really seven games that the team has to win and one game that if it was to lose, wouldn’t hurt as much. But the Bobcats really cannot afford to lose two games during this final push to the playoffs.

Two games apiece against Brown and Yale, then single matchups against St. Lawrence, Clarkson, Union and RPI remain for Quinnipiac. There is no reason why Quinnipiac should not beat Brown, RPI, St. Lawrence, Union and Yale. All of those teams except for RPI have sub-.500 records and make up four out of the bottom five spots of ECAC Hockey. Not to mention, Quinnipiac has already beaten RPI this year and should have no trouble completing the sweep in game two.

A loss to any of these teams could mean the end of the road to the Frozen Four. Or at least add a lot more obstacles to overcome.

That one game it can maybe afford to lose is against Clarkson. If Quinnipiac wins, that’s a huge victory for the Bobcats. If it takes care of business against all those mentioned above, that should bring the Bobcats to a ranking anywhere from No. 8 to No. 11 in the Pairwise, which would essentially lock up an NCAA Tournament berth.

But let’s say the Bobcats do lose to Clarkson. It wouldn’t hurt the Bobcats that much, but it could be enough to knock them out of where they need to be. Clarkson currently sits at No. 7 in Pairwise, so a close loss isn’t the end of the world.

It’s easier said than done, winning most, if not all, of the remaining games. With a young team comes inconsistent play, and that’s what we’ve seen all season from this squad.

With these final four weeks of hockey, Quinnipiac’s future is in its own hands. It has the ability to be in the top four of the final ECAC Hockey standings and secure a bye, resulting in a more favorable matchup (although, as the Bobcats know all too well from last year, it’s still a tough matchup).

It has the ability to push itself in a position for an at-large bid, where it doesn’t have to win the ECAC Hockey tournament to get into the Frozen Four.

But, as the Bobcats have said, it’s important to take it one game at a time. The focus is set on Yale in this game on Friday, Feb. 7, then it will be Brown on Saturday, Feb. 8. It’s a day-by-day process, but each day has large implications.

“We understand that every game is important in college hockey,” Quinnipiac junior forward Odeen Tufto said. “You only play 34 games. I think you can see down the stretch here, how one game can affect your Pairwise (ranking) and the ECAC Hockey standings so much. You just try and focus on each game night by night.”