For the 2020 Grammy’s, Demi Lovato debuted her new single, ‘Anyone,’ which is a cry for help after her years of addictions 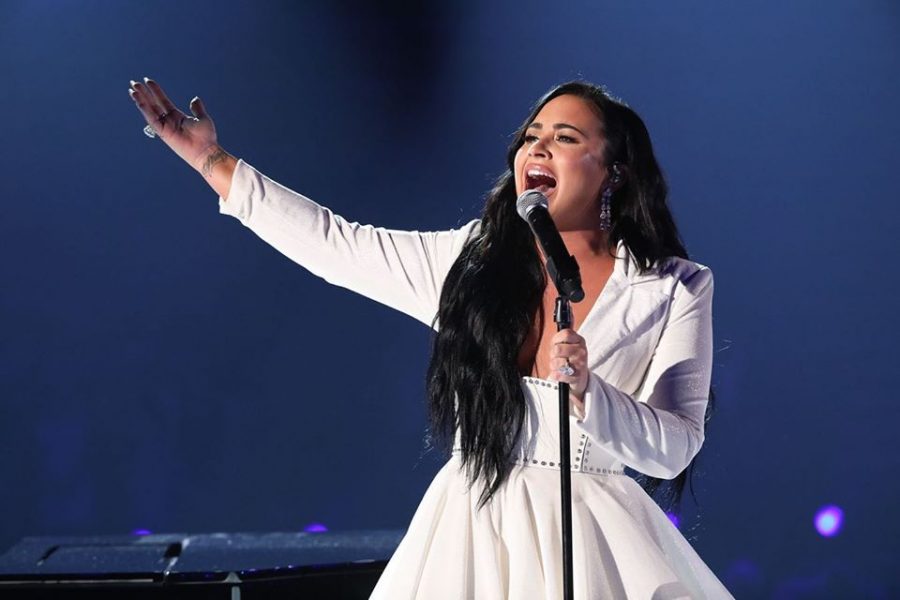 At the 62nd Grammy Awards, Demi Lovato performed her newest single “Anyone” two years after she released “Sober” in 2018.  This powerful and teary-eyed performance poetically exhibits Lovato’s cry for help with lyrics such as, “I tried to talk to my piano. I tried to talk to my guitar. Talked till my imagination confided into alcohol.” Lovato wholeheartedly sang her lyrics, in which it was impossible for the audience to not feel the emotional dynamic of her performance.

The song itself represents the continuation and healing of her mental health struggles that began in her teen years.

For the past 10 years, Demi Lovato has been known as a fixture in children’s TV shows and movies, including the “Camp Rock” film series and “Sonny with a Chance” on Disney Channel.

These strong characters that Lovato has portrayed masked the inner struggles she’s battled with for many years.

As chirpy and light as the characters were, it turned out Lovato was not as perfect as she embodied them to be.

As a teenager, Lovato was a prominent advocate for mental health. In an attempt to raise awareness, she has given speeches, outwardly spoken in interviews and has produced a film, “Beyond Silence.” The film revolves around three individuals battling anxiety, depression, bipolar and schizophrenic disorders.

“It’s very important we create conversations, we take away the stigma, and that we stand up for ourselves if we’re dealing with the symptoms of mental illness,” Lovato said in an interview with Variety.

Ever since 2008, Lovato has been releasing albums about breakups, fame and, later on, addiction. As the years went by, the albums have progressed to darker themes about addiction and loneliness.

Back in 2016, Lovato posted on Twitter, “So excited for 2017. Taking a break from music and the spotlight.. I am not meant for this business and the media.” However in 2018, Lovato released her single, “Sober,” where she sings lyrics, such as, “Mama, I’m so sorry, I’m not sober anymore,” “Call me when it’s over ’cause I’m dying inside,” “…and I’m sorry for the fans I lost who watched me fall again, I wanna be a role model but I’m only human.” Peaking at No. 11 on the Billboard Charts, Lovato openly admitted she had been relapsing.

“What I’ve learned is that this illness is not something that disappears or fades with time,” Lovato told NPR. “It is something I must continue to overcome and have not done yet.”

Following the release of “Sober,” Lovato had a near fatal overdose in July 2018, leading to her checking in to rehab to overcome her addiction. Two years later, Lovato made her first musical debut since her overdose at the 62nd annual Grammy Awards.

Later that evening Lovato posted on social media a response from her first live performance.

“What an unbelievable night. My first time back on stage in almost two years. So emotional for me,” Lovato wrote on Instagram. “Thank you all for the love, support and for sharing this moment with me. I love you all.”

On Super Bowl Sunday, Lovato performed the National Anthem. When asked about which performance is more nerve wracking, Lovato said, “I think probably the Super Bowl,” in an interview with SiriusXM Radio.

Despite her nerves, Lovato gives promising performances with her sheer talent and her strong, raw voice never fails to put the audience in awe. Now that the Super Bowl performance has happened, her fans shall see where and when her next jaw-dropping performance will be.