What these dogs are here for

The dogs that are on QU’s campus serve various purposes 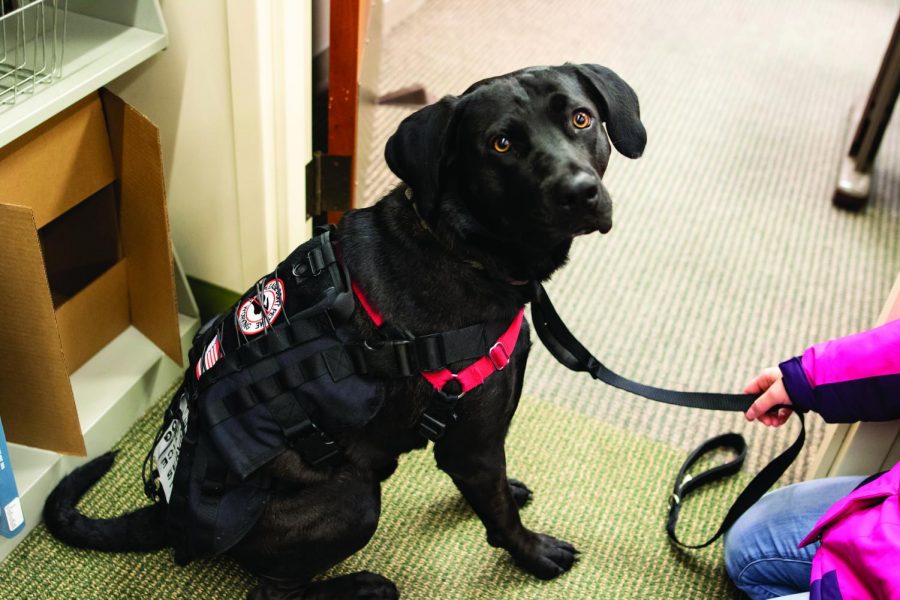 Creo is identified as a service dog by his vest.

Spring is just around the corner, which means it is almost time for students to flood the quad to sit outside and enjoy the warmth. Along with the influx of people appreciating the time outside comes with an increase in the amount of dogs coming onto campus. With that, members of the Quinnipiac community should be educated on the different types of dogs that accompany people on campus.

Kaitlin Palance, a senior psychology major who is the handler of Creo, a medical alert dog, explained that some students, professors and members of the Quinnipiac community are not fully educated on the three main types of dogs: service dogs, emotional support dogs and therapy dogs. Therefore, people may not understand how to react around these dogs which can be harmful to the dog and their handler.

“(Creo) wants to be the voice of the different dogs to show the community it’s important to educate on different aspects and bring awareness to the community and show that when there’s frustrations or you got certain things going on, it’s nice to show that every voice matters,” Palance said about how important it is for one to speak up to bring attention to a problem they feel strongly about.

Dogs like Creo are called service dogs or medical alert dogs. These dogs are considered to be medical equipment, just like an insulin pump or wheelchair, according to the Animal Health Foundation. Dogs who are service dogs are specifically trained to do their work or tasks.

“Service dogs are recognized by the ADA, American Disability Act, which they have perform tasks that they need to do in order to help the handler,” Palance said. “So not every service dog is trained to do the same tasks and so different ones have different jobs and under the ADA, they don’t have to be clearly identified as a service dog.”

“An emotional support dog. which is supposed to pretty much to provide a companion animal for those who have medical recommendations from their doctors, and so there’s limitations on where they can be and different rules,” Palance said.

Lastly, there are therapy dogs, who go with their owners to volunteer in various settings, such as schools, hospitals and nursing homes, according to the American Kennel Club. These dogs work with their owner to improve the lives of others.

“You might remember that there used to be therapy dogs that used to come in during their instruction times,” Palance said. “The two golden retrievers. They performed different jobs than emotional support and medical alert.”

All of these dogs on campus are here for a purpose, which is to help out their handlers, so it is especially important for others to respect the dogs and ask the handlers before they pet. For service dogs, sneaking in to pet is distracting while the dog is working, according to the Animal Health Foundation.

“What (Creo and I) are running into sometimes, people try to sneak in pets and all this other stuff because you’re in a crowd and not going to think anything of it, but (Creo’s) working,” Palance said. “We kind of want to educate that he has a job. He’s not here to be a play puppy. He’s here to do a task.”

However, for dogs who are an emotional support animal for their handler, the rules when it comes down to petting the dog when it is around is very different than service animals.

“My dog is registered with the school as an ESA (emotional support animal), so it doesn’t matter if people approach her,” Mara Cray, a public relations graduate student said about her dog. “She isn’t trained to do a job. Basically, she’s there to be social.” 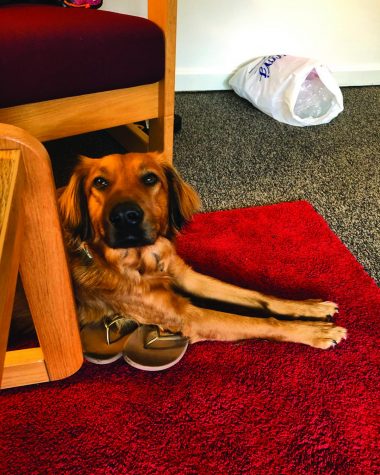 Photo contributed by Mara CrayZoe is one of the emotional support animals on campus.

However, while in classes, Palance educates her professors and fellow students about why Creo is in class just to ensure that they understand his purpose, and that he is with her for a serious reason.

“It’s a little bit frustrating because every class in the beginning of the semester, I educate the professor and the students like what he is, yes he’s working so try not to pet,” Palance said. “Once they understand that and know his role as a student, it reduces people asking me a million questions every day, and then they’re more at ease when they see a working dog.”

However, outside of class, it is more difficult for Palance and Creo because students and professors that are not in class with them do not understand the rules and how to act around a working dog.

“When we are out in the community, when we’re in passing, that’s where the concerns are because people aren’t in class with us,” Palance said about navigating campus when people do not understand Creo’s purpose. “They’re not understanding that there’s differences, and that he’s doing a job. They can see that, oh yeah he has a vest on, but they don’t understand the nature of it.”

Some dogs who are service dogs may not be wearing a vest or obvious identification. The ADA does not require dogs to wear a form recognition, according to the American Kennel Club.

“(Creo) is not the only service dog on campus,” Palance said. “You won’t know because they aren’t identified.”

When there is a dog on campus and someone does not know how to act around it, it is best for the person to ask the dog’s handle if they can pet the dog before making that action.

“The biggest thing that people would like to know within the community when asking students is more awareness about the differences and that yes, the school does accept these types of dogs, however, there’s various rules that you need to understand,” Palance said. “You can ask the handler questions about it, it would just make it easier if there is a situation that they know.”

Ultimately, these are just dogs, but it is important for members of the community to understand and learn about what these dogs are doing while on campus.

“In the end of the day,  (Creo) is a dog,” Palance said. “A lot of my classmates, they don’t have any concerns or anything, but they feel a lot more at ease coming into class knowing that he’s there for a reason and that he’s here to do a job. Then they kind of forget about it. We just want to reduce the amount of questions to loosen the amount of attention”