The NFL’s Rooney Rule is failing

One policy change isn’t enough to fix a biased culture 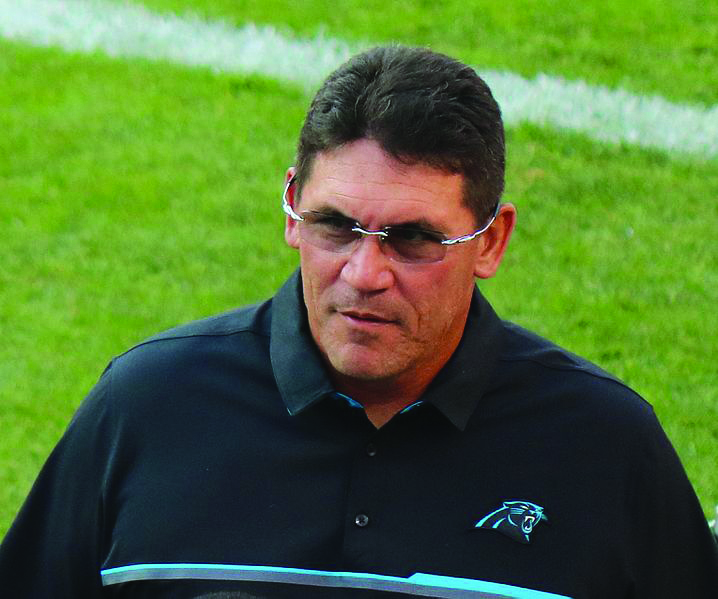 Ron Rivera was the only non-white head coach to be hired after the 2019 season.

The NFL has a diversity problem.

The same league in which nearly 70% of players are black, according to The Institute of Diversity and Ethics in Sports, can’t seem to have the same in its coaching or managerial staff. This issue needs to be addressed.

Since the end of the regular season, five head coaches were hired. Of the newly hired head coaches, only one was non-white — Ron Rivera of the Washington Redskins. But that still doesn’t increase the total number of minority coaches from last year, as he was fired by the Carolina Panthers on Dec. 2.

Since Fritz Pollard of the Akron Pros became the first black head coach in NFL history in 1921, there have been no more than seven minority head coaches at any one time.

The main reason for this discrepancy is that most of the owners and managers hiring coaches are old, white men. There are only two non-white owners and the Miami Dolphins’ Chris Grier is the only black general manager.

If the NFL wants to become more diverse, it needs to start at the top with its ownership and management. Sadly, the league has only scratched the surface.

In 2003, the league enacted the Rooney Rule which mandates that a team interviewing candidates for a head coaching or coordinator vacancy must interview a candidate from an ethnic-minority group.

While no team besides the 2003 Detroit Lions has been fined for violating the rule, the severe lack of minority hirings makes it clear that it is easy to subvert.

Eric Bieniemy, who is black, has been the head offensive coordinator for one of the best offenses in the league — the Kansas City Chiefs — for the past two years and mentored one of the most talented quarterbacks today — not to mention winning Super Bowl LIV. However, he still hasn’t been seriously considered for a head coaching job. If he was, teams would have recognized his credentials and given him a head coaching job.

The New York Giants, who interviewed Bieniemy, instead decided to hire Joe Judge, who is white, to be their new head coach in 2020. Judge was the wide receivers and special teams’ coach for the New England Patriots, but he doesn’t have the qualifications necessary to manage a 53-man team.

As a Patriots fan, the team’s receivers this year were awful, and star wide receiver Julian Edelman had the most dropped passes in the league this year. And while some responsibility can be put on offensive coordinator Josh McDaniels, Judge’s job is to look over the wide receivers, and their poor performance reflects poorly on him.

The only saving grace for Judge is that the Patriots’ special teams are great, but they have been for years, and a lot of the credit has to go to head coach Bill Belichick who has had a top-10 special teams unit in 14 of the past 20 seasons, according to Pro Football Focus.

Judge has done nothing worthy of even an interview. How can he be considered when Bieniemy is still an option?

Likewise, the Carolina Panthers decided to hire Baylor University head coach Matt Rhule, who is also white, as their new head coach, replacing Ron Rivera. In his seven years coaching college football for Temple and Baylor, Rhule’s teams have only been ranked in the top-25 once in the final Associated Press poll. Last year, his Baylor Bears finished the year ranked 13th in the final AP poll with a record of 11-3.

The most embarrassing fact, however, is that the Panthers gave a mediocre coach a seven-year, $60 million contract. That is inexcusable.

Teams like the Giants and the Panthers are trying to find a diamond-in-the-rough coach like Sean McVay, who is white. He was the offensive coordinator of the Washington Redskins before becoming the youngest head coach in NFL history when he was hired by the Los Angeles Rams in 2017 at the age of 30. When he was 33, he became the youngest head coach to lead his team to the Super Bowl.

While the Dallas Cowboys and the Cleveland Browns each hired white head coaches this year, both of their hires make sense. Mike McCarthy, the new Cowboys coach, was the former head coach of the Green Bay Packers and led the team to a Super Bowl victory in 2010.

Kevin Stefanski, who was hired by the Browns, was the offensive coordinator for the Minnesota Vikings and took an offense that was middle-of-the-pack in 2018 to top-10 in 2019. For the Giants and the Panthers, though, there is no excuse.

I’m not saying that Giants’ owner John Mara or Panthers’ owner David Tepper is racist, but I am definitely saying that if Bieniemy was white, he would be a head coach by now.

“So many people have invested so much into the dream of diversity, and there’s been so much time and thought and attention brought to bear,” said Pamela Newkirk, author of Diversity Inc., in an interview with USA Today Sports. “Now it’s just left for leadership to either do it or be honest that they don’t want to do it.”

When it comes down to it, the league does not want to make its white owners unhappy. The same applies to the league’s 83% white fanbase, according to an Experian Simmons study. Money matters more than morals for the NFL, and nothing proves this point more than the league’s response to hundreds of players kneeling for the national anthem to protest police brutality.

NFL owners, instead of supporting its own players, condemned them and stopped them from expressing their free speech, passing a rule that only allows players to either stand for the anthem or wait in the locker room. This effectively ended all protests, as players were afraid of getting suspended or losing their jobs for peacefully expressing their opinion.

Even Roger Goodell, commissioner of the NFL, said “we believe that everyone should stand for the national anthem.”

Players shouldn’t have to fit in to the imposed culture of the owners in order to have a job next year, but sadly, that’s what many football players face constantly.

“Your whole life you’ve been playing football for that moment to play in the NFL,” said Marshawn Lynch, running back for the Seahawks, at the MLK Now panel in Harlem. “And when you get there, all the executives and all the owners, they all white. And it gets to a point where in order to fit in you gotta … not be yourself.”