As the men's and women's tennis teams start their spring seasons, Riley Millette and Jared Penna explain what to expect from each team and some key players due for a great year 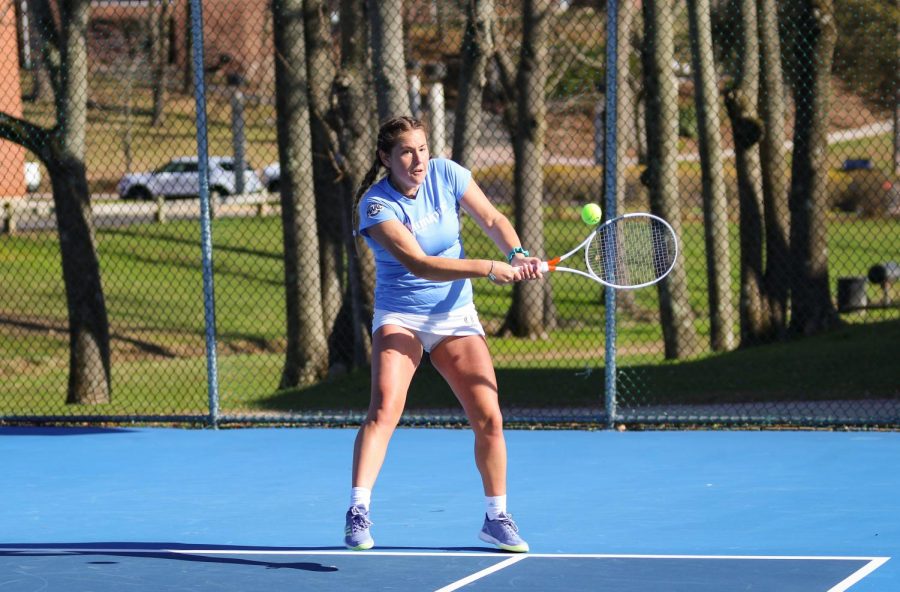 Women’s tennis
Quinipiac’s women’s tennis team enters its seventh year under head coach Paula Miller with a bad taste in its mouth. After five consecutive MAAC Tournament championships, the Bobcats came up short in 2019, paving way for the 2020 season to be a revenge tour.

The team kicked off its spring season on Monday, Jan. 20, with a loss to Harvard. After dropping the match 1-6, the Bobcats traveled to Yale where they lost again, this time by a score of 0-7.

As the team continues to find its way back to form from the two one-sided defeats, it needs to reflect on the strong history of the program. The women’s tennis team has gone six straight seasons without coughing up a match in MAAC regular season play.

The combined 43-0 record in the MAAC from 2014-2019 is the best conference record over any five-year span in the history of the program. Still, the unbeaten streak stands as the longest such streak in Division I tennis, and Quinnipiac looks to make it seven straight years without a conference loss. Seven straight.

The team looks to do so on the backs of some solid young talent. Sophomore Kamilla Nella is coming off a freshman season that impressed plenty. She tied for the most singles wins on the team last year with 16, earning herself a spot on the All-MAAC First Team in No. 3 singles.

She also performed well in doubles matches last year, going 4-5 overall with junior Payton Bradley, including a 3-1 record in MAAC doubles. This, too, earned her a spot on the All-MAAC First Team in No. 2 doubles.

The biggest adjustment for Nella this season is going to be the move to No. 1 singles. Last year, she spent her time in No. 3 singles matches, but the boost in competition will present a new challenge for Nella this year. How she performs under this new pressure is something to keep your eye on as the season goes along.

To this point, Nella is finding similar success this year. She boasts a 5-4 record early on this season, putting her right on pace for her 16-15 record last year that earned her honors and awards. What gives this season so much potential is the boatloads of talent that her teammates provide as well.

As one of two seniors on the team, Layla Rodriguez hopes to improve on her junior season in her final year under Miller. She currently leads the team in wins this season with an 8-3 overall record.

Rodriguez’s play becomes even more valuable in doubles matches. Her 7-4 doubles record last year was the best record on the team in terms of winning percentage of all returning players. Her doubles partner last year, Jennifer Lu, has now graduated.

Lu’s departure will certainly be felt. She tied Nella for most singles wins on the team last season, and it will be interesting to see how Rodriguez’s doubles play is impacted by her new partner. So far, she’s a team-best 3-2 with new partner and fellow senior Amy Zammarieh in doubles play.

If the Bobcats want to turn it around this season, they’ll need contributions from everywhere. The team graduated 25 singles wins between Lu, Proyfon Lohaphaisan and Alexandra Mircea, who all finished their studies and athletic careers at Quinnipiac in the spring of 2019. If the team wants to climb back above .500 this season, it’ll need to replicate those 25 wins and then some, counting on a multitude of players to do so.

One player who has a good chance to help the cause is freshman Claire Koscielski, who spent this fall at the University of Cincinnati. Koscielski comes from a family of tennis players — her father, mother and two sisters all have played or are currently playing collegiate tennis.

In high school, Koscielski was a perfect 101-0, deeming herself worthy of the No. 100 spot on TennisRecruiting.net’s ranking of players in her graduating class. At Cincinnati, she posted a 5-1 singles record and a 6-3 doubles record, proving her transition from high school to collegiate tennis to be a smooth one.

Another player off to a hot start in her college career is freshman Andie Williams. In her short career to this point, Williams has racked up the second-most wins on the team this season, currently repping a 7-4 overall record.

As the season continues, she and her doubles partner freshman Jordan Bradley are going to need to find ways to work together. They’re off to a lowly 1-4 start in doubles play, but given their individual talents and the guidance of seven-year veteran Miller, their luck is bound to change.

The Bobcats aim for their sixth MAAC Tournament title and NCAA Tournament appearance in seven years this spring, and all the signs point to them doing so. The unbeaten streak in the MAAC still stands, and for as much talent as they lost, they brought in just as much in a hungry freshman class.

With a challenging out-of-conference schedule, the young Bobcats may have a lot on their hands, but expect them to perform well nonetheless. The conference record should remain unharmed. My prediction for this season is a 14-11 record with another MAAC Tournament championship and a trip to the NCAA Tournament. -J.P.
Men’s tennis
The Quinnipiac men’s tennis team began its official spring season against Brown on Jan. 19, falling to them 5-2.

The team followed that with a loss to Binghamton with a final score identical to that of the Brown match.

Despite the back-to-back losses, the team started the year on a positive note, as its lone win of the season came way back on Oct. 5, a 4-3 win against Holy Cross.

Sophomore Alester Magalit, reigning MAAC Rookie of the Year, participated in the ITA Regional Championship in October but was unable to pull off the victory.

Also taking part in the tournament were senior Patrick Cachapero and junior Hielke Moore. Moore lost his only singles match of the day to Buffalo’s Matt Johnson, and both lost their doubles match in a close race with Fairfield’s Kaya Gore and Jonathan Olive-Blanco.

After the ITA Regionals, the tables began turning in the Bobcats’ favor. Oct. 26, was Alumni Day for the team which included a dual matchup with Fairfield and Bryant. This is when the team started kicking it into gear.

Senior Axel Stern and sophomore Aleksa Martinovic were standouts on Alumni Day, muscling out two doubles wins and one singles win each.

Needless to say, the team is difficult to predict. It was trending up going into their season opener, but instead of continuing to warm up, dropped its matches against Brown and Binghamton.

Standing at 1-2 officially on the season, it’s tough to tell what to expect from the Bobcats. Even though they were able to snag a win from a tough Holy Cross team that is 5-2 on the season, they dropped a match to a Binghamton team that got skunked by the same Brown team 7-0.

When looking at a hot-and-cold team like Quinnipiac, the schedule is very important. It finished third in the MAAC last year, looking up at Monmouth and Marist. The Bobcats face off with those teams on April 4, and April 18, respectively.

Quinnipiac will have an opportunity to pick up some steam heading into those matches, as it faces off against Fairleigh Dickinson, a 9-13 team last year, and Niagara, a 2-16 MAAC opponent in 2018-19.

The Bobcats can expect to see growth from last year. Magalit is still rising into form and still has uber potential, guided by plenty of senior journeymen who have seen their fair share of wins.

Looking for a dark horse breakout candidate? Look no further than Martinovic. Like Magalit, Martinovic is a sophomore and has already achieved plenty of success at the collegiate level. He and Stern, his frequent doubles partner, have rampaged through the MAAC together, collecting four wins to only one loss. After recently placing third in the Serbian national U18 tournament, Martinovic has flashed his stuff and is poised to explode at any point.

Also, look for the MAAC’s most dynamic duo to continue bursting through competition. Cachapero and Moore finished last year 11-5 in doubles, including four wins out of their five MAAC matches.

There is no reason to think either upperclassman will slow down, but in fact reason to think they will heat up even more, considering their 2-1 record at the Connecticut State Championships on Nov. 1.

Both players also held their own in singles matches to start the season, as Moore went a perfect 3-0 at the state tournament. Cachapero went 2-1 at the tournament, and he was only outscored 16 sets to 14 in his only loss of the tournament.

A game circled on Quinnipiac’s calendar this year is its matchup with Marist on April 18, the penultimate regular season matchup of the season. Quinnipiac finished one match behind them in the MAAC standings last year, as Marist was the No. 2 seed and Quinnipiac was No. 3 heading into the tournament.

Cachapero, Magalit and Moore were all victorious in their singles matches, but the doubles matches were what sealed the win for Quinnipiac.

Stern and Martinovic were their usual selves, as they won their match 6-4. Although the team lost its title match against Monmouth, the No. 1 seed, Marist will return to Hamden looking to avenge its early exit from the semifinals last year.

The men’s tennis team has had its fair share of ups and downs, even this early in the season. However, in a conference that had just two .500-plus teams last year, the Bobcats are predicted to finish near the top of the conference with an overall record of 10-9. – R.M.