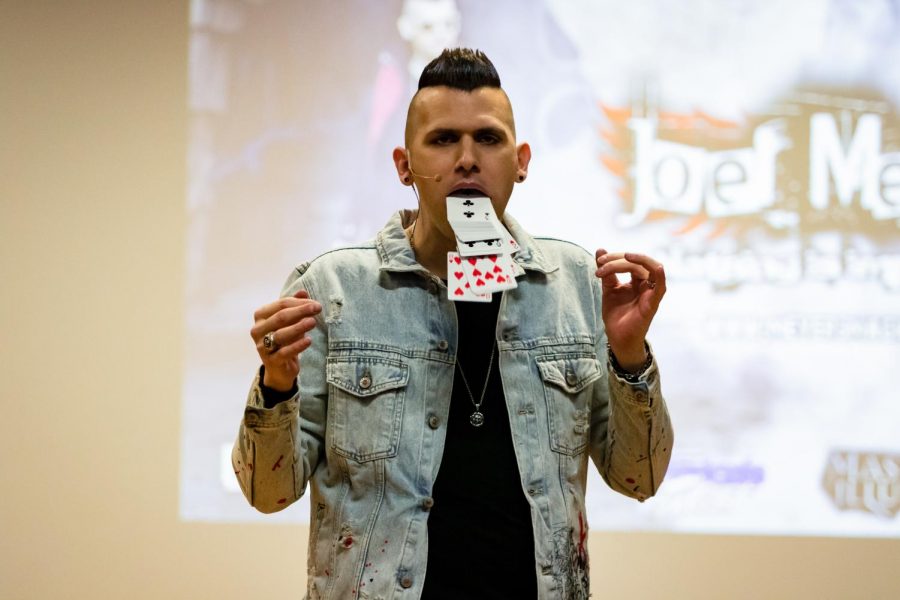 While Quinnipiac students were enjoying their winter break, the Student Programming Board (SPB) was planning a Welcome Back Week to celebrate the first week of the spring semester. The week, running from Jan. 21-Jan. 26, consisted of several Disney-themed events such as free food, trivia and a professional magician.

This week of events began when the SPB general board brainstormed ideas for a theme that would generate excitement from students. While Disney prevailed as the theme for the week, other themes that were considered included Harry Potter, Marvel and Star Wars.

“Disney week was pretty unanimous,” said Tyler McNeill, a junior public relations major and SPB’s vice president of membership. “A lot of people were very excited for the week.”

McNeill is in charge of running general board meetings, which take place on Mondays at 4 p.m. in SC 120. Other than attending general board meetings, students looking to get involved in SPB can contact executive board members to learn how they can get involved in committees such as the Late Night and Travel committees. The ideas for SPB events are typically created by the executive board, but the general board does get the opportunity to brainstorm ideas for events as well.

“It’s always nice to have the two board meetings because the people in the meetings give us a chance to get different perspectives we might not have thought of,” said Annika Gustafsson, a senior public relations major and SPB’s arts and entertainment chair. “There’s only so many times you can pick the brains of 14 people.”

The first event of the week was Walt Quiz-ney World, a trivia competition with prizes such as Funko POP figures, Disney hats and pins and $75 Amazon gift cards. Teams had to answer questions based on several Disney-themed categories ranging from theme parks to Disney songs.

Wednesday night’s event was a performance by magician Joel Meyers, who has done private performances for celebrities such as Brad Pitt and Johnny Depp. He has also performed on television shows such as “America’s Got Talent” and “Wizard Wars.”

Meyer’s performance involved several illusions and stunts involving members of the audience. To close his comedic performance, Meyers told a story from when he was a child and his father created the illusion of snow. He then recreated this illusion for the audience.

On Thursday morning, SPB served breakfast from “Duke’s Diner,” which was based on the diner from the film “The Princess and the Frog.” Students could grab doughnuts from Whitney Doughnuts, bagels and other breakfast items.

Friday’s event was the first bingo night of the semester. With a Bibbidi Bobbidi Bingo theme, prizes included tickets to see “Aladdin” and “Frozen” on Broadway, a record player with Disney records and a year’s subscription of Disney+. Other prizes included two sets of AirPod Pros, two Apple Watches and a Google Home.

SPB used the night to introduce a new type of bingo round– paper bingo cards with Disney songs. Rather than calling numbers, a playlist was put on shuffle and players marked songs on their cards as they were played. The round was well received by people at the event with most people expressing that they would like to see it again.

The Beauty and the Beast Feast held on Saturday night offered free food such as pie, mozzarella sticks and Panera Bread soups. Reusable utensil sets were given out to the first 100 people in attendance. Disney songs were playing and various board and card games were out for people to play.

The Sleep-In Beauty event on Sunday afternoon was about relaxation and allowed participants to create their own essential oil diffusers with scents such as tea tree oil and peppermint while also customizing their own sleep masks. They also offered pastries, macaroni and cheese and soup from Panera Bread.

All six of the events garnered a considerable turnout, with people being lined up in advance for Bibbidi Bobbidi Bingo, the Beauty and the Beast Feast and the Sleep-In Beauty event. However, turnout was not the most important factor of an event for SPB.

“I think what really makes an event successful is the amount of thoughtfulness put into it and who you surround yourself with when planning it,” Gustafsson said. “I know for us, we all pretty much operate as one big family.”

While the week had more events than a typical week on campus, SPB consistently provides activities, particularly on Friday and Saturday nights. These events provide free entertainment for those who either do not want to leave campus or do not have money to do something off campus.

“It gives students another chance to experience something that they might not have had in high school, and they might not be able to access here in Hamden,” Gustafsson said. “It just gives them a nice way to kind of regroup and have time with their friends here.”