Kicking off a new era

This year’s Super Bowl has some new faces 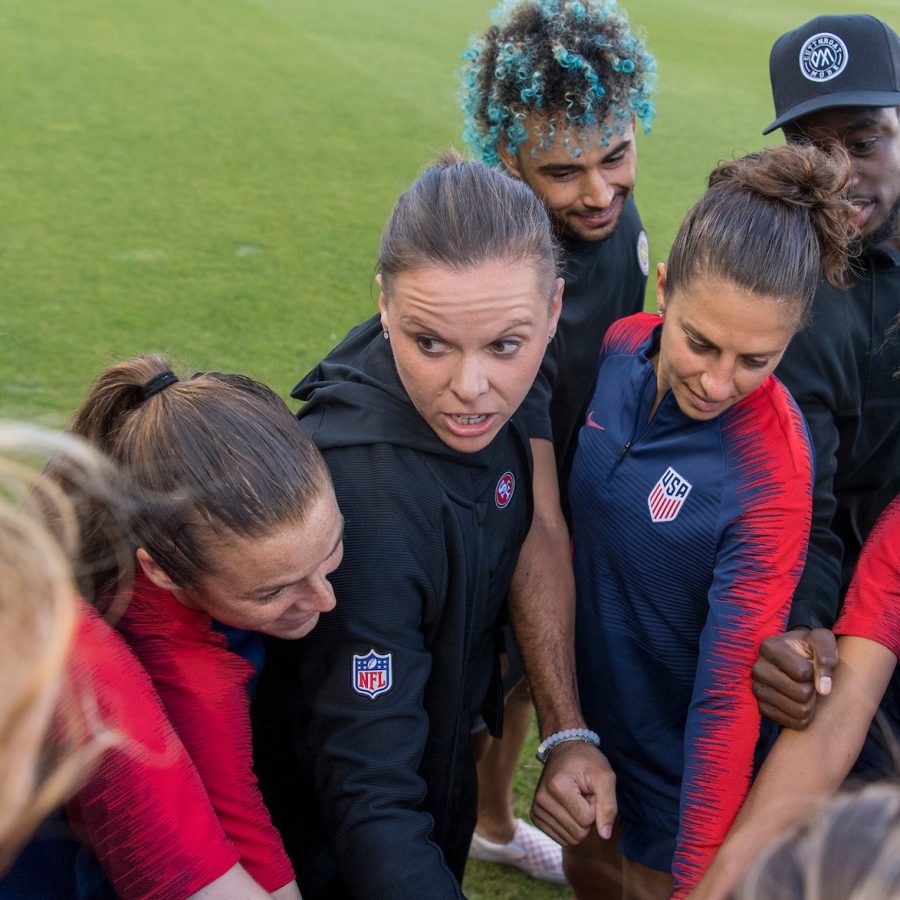 Katie Sowers is making history by being the first female coach in the Super Bowl.

Super Bowl LIV will be quite a different scene compared to past matchups.

The Kansas City Chiefs and the San Francisco 49ers are competing for the Lombardi Trophy this year.  For the second time since 2003, a quarterback not named Peyton Manning, Ben Roethlisberger or Tom Brady will represent the AFC in the Super Bowl. The only other quarterback who managed to get past the AFC in the same span is Joe Flacco, who led the Ravens to a Super Bowl victory back in 2012.

Veteran head coach, Andy Reid, brought this team to the championship. Reid has made only one appearance in the big game, but lost to the Patriots back in the 2004 season.

This year is also special since this will be the first time there will be a female as a part of the coaching staff in the Super Bowl. Katie Sowers, the 49ers’ offensive assistant coordinator, is in her fourth season as a coach in the NFL and now looks to become the first female coach to win a Super Bowl.

She is one of the very few women involved in men’s professional sports. Alyssa Nakken became the first female coach in the MLB on Jan. 16. Meanwhile in the NBA, Becky Hammon became the head coach of the San Antonio Spurs’ summer league team back in 2015 and is currently an assistant coach on the Spurs.

Hopefully, this paves the way for more women in male professional sports.

This is the first time the Chiefs has made the Super Bowl since 1969, which is the largest gap between Super Bowls for any team in the history of the league.

San Francisco, on the other hand, is a surprise entry to the Super Bowl. After being one of the worst teams in the league the season before, it surged back to the top of the NFC, dominating all year and earning the No. 1 seed.

There is a lot on the line for both of these teams. The Chiefs, who were in the very first Super Bowl, can start their own dynasty with the duo of Mahomes and Reid while the 49ers can strike gold once more and earn their sixth Super Bowl championship, tying the Pittsburgh Steelers and New England Patriots for most in the league.

But putting the two teams and their successes behind, there are a couple of other outstanding factors to Super Bowl LIV. This year, Demi Lovato will sing “The Star Spangled Banner” while the halftime performers are Jennifer Lopez and Shakira. Miami native, Pitbull, will perform at the pregame show.

Something that always brings a smile to our faces when it comes to the Super Bowls are the commercials that are aired. There are some commercials that stand out the most and some that shouldn’t have been aired.

Make sure to look out for the Doritos commercials, every year the company seems to come out with a new commercial that always makes us laugh. Nationwide might be coming out with something on its own that features Peyton Manning and Brad Paisley.

One last commercial that brings tears to our eyes would be the Budweiser commercial. The commercials that feature the beloved Budweiser Clydesdales always warms up the hearts of viewers.