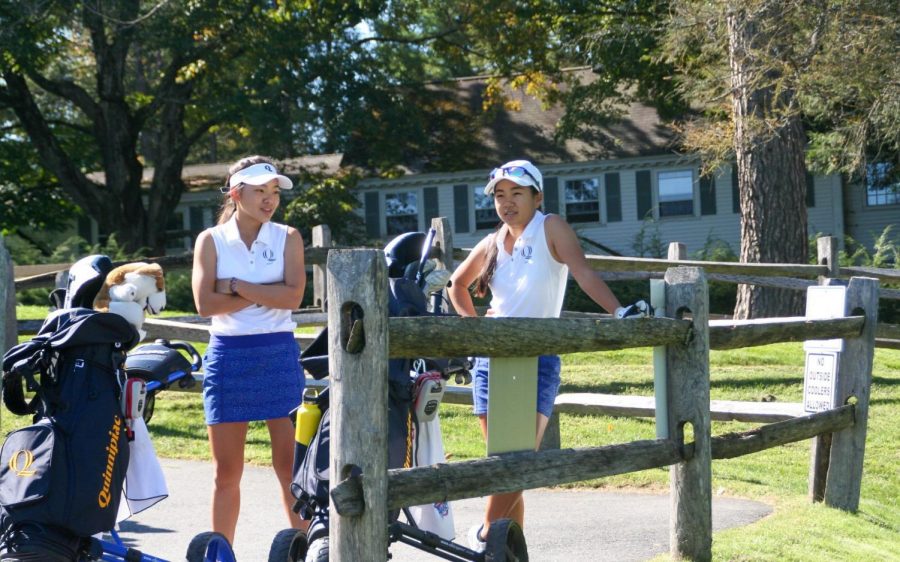 The two faced off numerous times in high school, becoming closer and closer with each epic duel. This past weekend, the two took their friendship all the way to Sun City, Arizona, where they competed together in their first pro tour event.

“It was really fun,” Peralta said. “It was good exposure and was really good preparation for the upcoming season.”

Peralta grew to love golf through her family. Her grandfather is the reason she began and still plays today.

“At his deathbed, (my grandfather) made my parents promise to start me in golf,” Peralta said. “When I was eight, my parents started me in a group class, and I have loved it ever since.”

Similarly, Sakoda found her lifelong passion through her family.

“When I was younger, maybe five or six, my mom wanted to try golf as a family sport,” Sakoda said. “I was the only one who just stuck with it.”

Not everything is easy the first time around, but it comes with time and experience. Sakoda mentioned how it felt to take part in her first pro tour event and how she is willing to take her game to the next level.

“For me, it felt like a new challenge,” Sakoda said. “I’ve done high school golf, and I know everyone else has, and it is a new way for me to conquer new challenges. I love challenges, and I can’t wait to see how I do playing at this level.”

Peralta looked back at her performance and mentioned one aspect of her game that she could have improved on.

For Sakoda, she said she wanted to eliminate extra shots that she left on the course.

Though both athletes were hard on themselves, it should not be taken with a grain of salt. Quinnipiac golf head coach John O’Connor talked about how participating in pro tournaments can help athletes elevate their game.

“It is important that they compete against the best competition they can,” O’Connor said. “It raises their game, it raises their preparation. They get prepared far better for the big events, and that was clearly a big event that they played in. Leeyen obviously did an unbelievable job in preparing for and competing in it.”

Peralta learned how critical patience is at pro tournaments and spoke about improving her composure going forward. Patience can be a virtue, something Peralta spoke about when discussing what she learned while participating in the pro tour event.

“To play with professionals, you have to have a certain level of maturity,” Peralta said. “Just seeing the other people on the course really taught me a lot.”

Sakoda identified the cause of her stress and talked about how she uses it to get herself in the best position on the course.

“I look at my thoughts that I am having and my thought process and then I tell myself what the next shot I want to play,” Sakoda said. “I want to put myself in the next shot or the next couple of shots and this really helps me get over my stress.”

Stress is a problem that can throw off the momentum for almost any golfer. With all the stress Peralta faces, she finds a way to manage it by being one with nature, her favorite part of the game.

“You’re with nature for four to five hours at a time you’re on the course,” Peralta said. “It is nice to enjoy nature and to take it all in.”

Sakoda talked about improvement as a way to deal with her stress on the green, mentioning that there are so many things to improve in her game that it can be used as a benefactor in countering the problem.

O’Connor has the utmost confidence in the two freshmen and their talent, and he expects them to be atop the MAAC by the season’s end. If participating in the pro tour event says anything, it backs up O’Connor’s statement.

“Kaylee’s game is very special around the green,” O’Connor said. “She is meticulous with her approach and her short game. Leeyen has a lot of distance. Off the tee, she is very long and accurate. She is also a really good putter, but really Kaylee’s game around the green is what makes her so special.

That confidence is accepted warmly by the freshmen, especially Peralta who values the athlete-coach relationship like none other.

“It’s definitely really important. (O’Connor) is the best coach ever. He’s always there for me and the team and acts like a father figure for all of us. It definitely helps a lot to know that a coach will be there for you when needed the most.”

With the beginning of the spring season inching closer by the day, Peralta and Sakoda will look to use their experience from the pro tour event with Quinnipiac in hopes of bringing a MAAC title to Hamden.