If the president is impeached and acquitted, but nobody is watching, does it really matter? 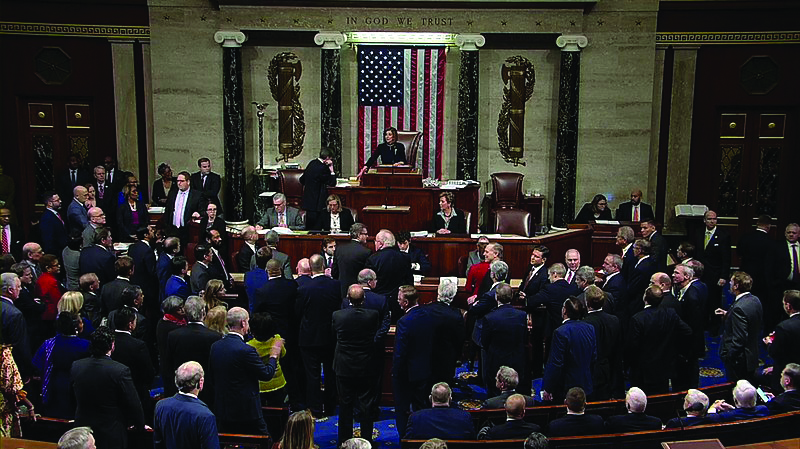 The House of Representatives voted in favor of adopting the articles of impeachment against President Donald Trump.

For only the third time in our nation’s history, the President of the United States has been impeached and is now on trial in the Senate. By any objective metric, this ought to be a historic moment. Why doesn’t it feel like it?

NBC News ran a segment on Jan. 18, where it talked to voters about the process. What they saw was “impeachment fatigue.” It may not feel like it on social media, but many people don’t care about the process. They believe it’s just another partisan food fight, and a distraction from focusing on real issues. There is some empirical backing to this.

A CBS/YouGov poll found that majorities of Americans disapproved of how both President Donald Trump and congressional Democrats were handling the impeachment process. According to The Hill, only 13.8 million people tuned in to watch the first day of the trial. That sounds like a lot, until you consider that is more than five million fewer who watched former FBI director James Comey in 2017, two million fewer than those who watched former Trump attorney Michael Cohen and 1.5 million fewer than those that watched the first Democratic debate. It falls vastly short of the impeachment proceedings against Richard Nixon which were watched by 71% of the country, according to Gallup. By Wednesday, only 8.9 million were watching. In other words, it seems like most people don’t really care about the story.

Perhaps one reason for this phenomenon is that impeachment is like a bad movie that’s been spoiled. There’s no intrigue or uncertainty. From the day House Speaker Nancy Pelosi announced the inquiry, there was never any doubt it would result in a mostly party line vote to impeach. And now, everyone knows that the Senate trial will result in a mostly party line vote to acquit. This will be news for about two weeks, and then something else will happen that will draw everyone’s attention. Aside from a small slice of Trump-district House Democrats and possibly Senators Doug Jones (D-AL), Gary Peters (D-MI), Susan Collins (R-ME) and Cory Gardner (R-CO), who are up for re-election and represent states that voted for the opposing political party for president in 2016, impeachment will be a distant memory by Election Day 2020.

Another reason is that it seems like this is something Democrats are doing for cynical political reasons, not genuine concern for the Constitution or anything like that. Of course, they say that they are only going down this path because of Trump’s actions. But in order to see what someone really thinks, you ought to look at what they do, not what they say. Using that method, we can deduce something about the impeachment proceedings that ought to be startling, but truly isn’t: Democrats are not seriously trying to remove the president from office.

If they were, why did Pelosi attempt to hold the articles of impeachment in an attempt to get Senate Republicans to run the process as she liked? The case Democrats made was that the president was such an existential threat to the next election that he needed to be removed as soon as possible. Why, then, delay the process for a month in an obviously futile effort to get Mitch McConnell to cave? He and other Republicans would be perfectly happy to not deal with a trial and could caw about how the Democrats were too scared to prosecute their case because it was so weak.

You can see a similar situation in the fight over witnesses. Democrats wish to have witnesses at the impeachment trial. Impeachment manager and House Judiciary Chairman Jerry Nadler (D-NY) told CNN in December that the Democrats’ case “if presented to a jury would be a guilty verdict in about three minutes flat.” Yet during the impeachment trial this week, Nadler accused Senate Republicans of a “cover up” if they declined to call witnesses during the trial. Those two statements don’t square. Either the Democrats’ case is so strong that a jury would come back with a guilty verdict in three minutes flat, or it is so weak that not pursuing additional witnesses would be tantamount to a cover up. It cannot be both.

Would a serious impeachment have named Nadler, who was in favor of impeachment even before the Ukraine scandal, as an impeachment manager? What about Schiff, who claimed repeatedly and without evidence that he had secret intelligence showing Trump colluded with the Russian government to steal the 2016 presidential election? If Trump really was an existential threat to America as we know it and a critical mass of Republican senators had to be convinced to remove him, it would be hard to find worse people to convince them. Why not name independent Rep. Justin Amash, a former Republican and the only non-Democrat to support impeachment in the House?

Here’s the dirty secret: Democrats were always going to impeach Trump. Some have wanted to do so since the very first day he took office, according to the Washington Post. Many in their base demand it, leaving them vulnerable to primary challengers if they do not. They called several votes on the matter that failed while Republicans still held the House. But it seems to have been a strategy to appease their base, and little more. Understanding that Trump is not actually an existential threat to the country, at least in private, they have transitioned the process into political theater, hoping to damage the president in advance of the November election. Maybe that works, maybe it doesn’t. But the president will be acquitted, nobody will change their minds, and everyone will move on with their lives.