Coronavirus has spread to 14 different countries at the time of publication. It has not spread to Connecticut.

The Frank H. Netter MD School of Medicine hosted a lecture on disease outbreaks on Jan. 24. More than 50 faculty, students and members of the press attended Bausch’s lecture. 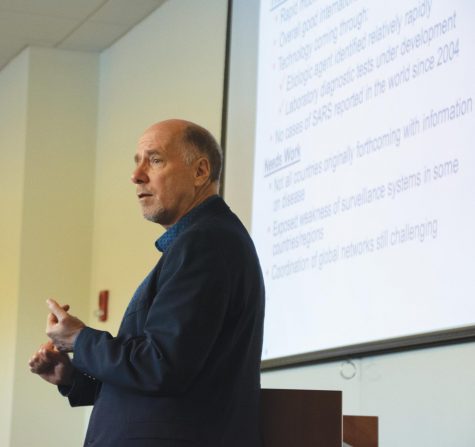 “I think it’s nice to hear somebody who is actually on the ground doing epidemic or possible pandemic management,” said Aaron Smith, a second-year medical student. “You don’t really hear from that set of people particularly often, and honestly it’s on everyone’s minds because of the coronavirus.”

In response to the outbreak, the United States has decided to screen passengers who are flying in from China at major international airports. Bausch said that he felt that the screenings were not a necessary form of precaution.

“There are some of those screening mechanisms that can be called for, it’s not entirely bad, but it’s not 100%,” Bausch said. “I mean, if you got infected the day before, you’re incubating, you will show up with a normal temperature on an infrared camera, and pass freely, and not get sick until you’re back with friends.”

The threat to Quinnipiac is low, but the university is taking some preventative measures.

“We have already been in contact with local public health authorities to coordinate our efforts with the recommendations of the Centers for Disease Control (CDC),” the University said in a statement.

Bausch, a physician and virologist, has served as the director of the United Kingdom Public Health Rapid Support Team since 2017. Launched in 2016 in response to the 2013-16 Ebola outbreak, the organization coordinates responses to outbreaks in low and middle income countries.

Bausch discussed his experiences with diseases that cause outbreak in low- and middle income countries, such as malaria, Ebola, Lassa fever and diphtheria.  He stated that these diseases mostly came from animals. There is always a potential for new viruses to be found as all the animals are still intermingling and mutating everyday.

“Things are always ongoing and even if we could know, even if today we said we know all the pathogens that existed, all the animals in the world tomorrow, there’s still the potential for something new,” Bausch said. “And of course, the real risk is what we get.”

He compared three outbreaks that happened in the past: Severe Acute Respiratory Syndrome (SARS), Porcine and Ebola viruses.

Bausch discussed how organizations typically go into a community that is experiencing an outbreak and tell them what to do, and how that is not the right approach.

“The fundamental thing that stops outbreak is not any of us coming in from outside, it’s the community themselves,” Bausch said. “The question is: how do we help the community to do that?”

The Ebola virus started in a rural area in Democratic Republic of Congo. Bausch said that it likely started with a child playing in a playground with some bats on the trees nearby. The child became infected, so people thought that the virus was transmitted from the bats.

For Bausch, looking for Ebola’s reservoir, which is the species that had Ebola and then transmitted it, was one of the most rewarding works he has done throughout his career.

“People used to say to me, you know, why do we even research this? Is this worth the investment?” Bausch said.

Bausch explained how new technology systems to detect viruses are important. He believes that in order to advance medical discoveries about outbreaks, people must look beyond the simplistic analysis of just a number of cases.

“I think, you know, how different would the world be perhaps if we could have detected the HIV virus when it was truly emerging in the earlier part of the last century,” Bausch said. “Then (we could have) dealt with it early on rather than finding out almost a century later.”

Bausch pointed out the consequences from these outbreaks other than deaths that make this kind of research worth investing in, such as economic loss, unemployment, national security and school cancellations.

“Investing in public health is something that we always need to be advocating for because it always costs much more to (an infected) country,” Bausch said.