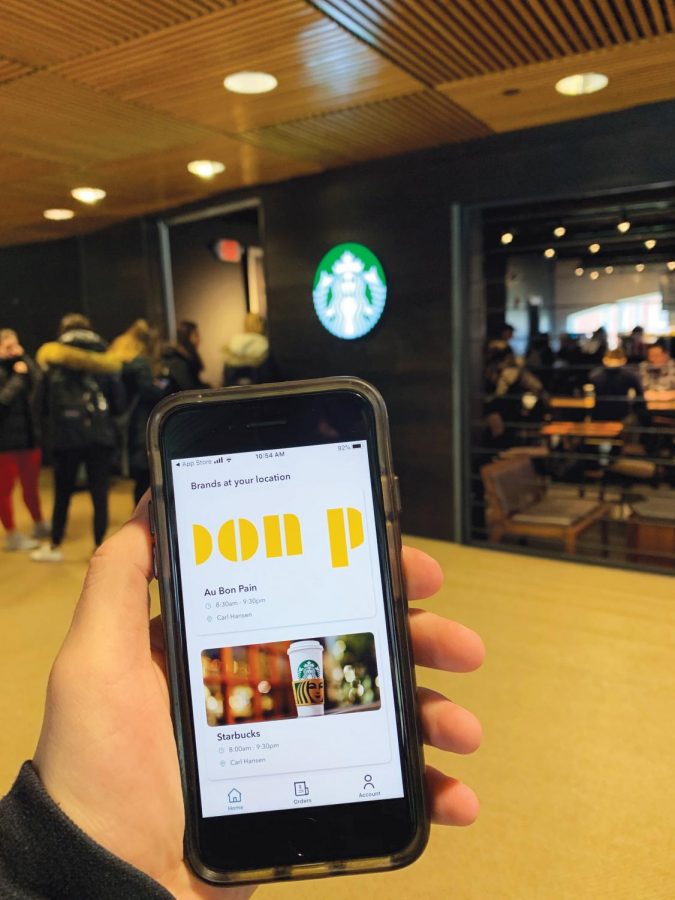 Mobile ordering has been introduced in an effort to cut down on long lines.

The corporate food provider for Quinnipiac University, QU Dining, brought vast changes to the overall dining experience on campus into 2020.

QU Dining revamped its menus by adding a FYUL station that serves cleaner and healthier foods, Starbucks coffee in Cafe Q with direct access to milk, creamers and sugar, fresher produce and meat at stations, a new grilled menu on the kiosks and a rotating menu at Bowl Life that will flip every three weeks based upon students votes.

Mobile ordering for both Starbucks and Au Bon Pain is now available by using the Boost application, and there is more variety and cheaper prices of sushi with a new sushi vendor at Revolution Noodle. A new campus executive chef, Chris Molyneux, was added to the staff to help train fellow workers.

“Chartwells has changed and evolved since I was a freshman,” said Chidi Nwuneli, a senior political science and international business major. “It’s only going to get better and  the changes are really good to see.”

The company focused on listening to student feedback regarding high prices of food offered on campus. Meal deals are now available for students to purchase more food for a cheaper price, as well as a decrease in the prices of products on campus such as bottled water, Pure Leaf teas and Ben & Jerry’s ice cream pints.

“Last semester, I ate at the dining hall maybe two to three times a week and still ran out of the 200 meal points earlier in the semester,” said Emilie Zocco, a sophomore political science major who is on the commuter meal plan. “I think coming into this semester with the new lower prices will allow me to stretch my meal plan for a longer period of time.”

Changes were also brought to the other two campuses as well. York Hill will now have more variety in its menus, fresh ground burgers that are made at the grill, Chobani Bar and omelettes available all day, Express Pizza and new hot deli menu. The North Haven’s menu is currently being enhanced to improve on what is offered.

The Student Government Association (SGA) continued to work with QU Dining to further enhance the dining experience based upon student feedback. It helped set up a town hall meeting in November as well as set up an open table for students to come talk to members in the student center.

QU Dining and the Student Government Association (SGA) held a town hall meeting previously on Wednesday, Nov. 13, and gave students the opportunity to voice their concerns as well as give feedback. The issue of raw chicken was one main concern that came up in the meeting.

“I think the changes were due to a culmination of the suggestions we had gotten over last semester,”  said Sofia Marshall, the Vice President of SGA. “We’re progressing to a point where there’s more student communication between us and QU Dining.”

After starting the semester off with great reviews on the modifications that appeared throughout the three campuses, an instance arose of QU Dining allegedly serving a piece of raw chicken in a student’s salad. This complication worried students as the problem surfaced on social media accounts, such as Barstool Quinnipiac.

“I know it’s going to take a while for the changes to really make an impact but I was very disappointed by the post and to see that this problem is still occuring,” said Kasey Kelliher, a freshman occupational therapy major. “The raw chicken is the main problem.”

QU Dining is currently trying to solve the problem and has not yet confirmed the incident that was posted online. QU Dining said it urges students to make them aware of problems as they happen so they can automatically be righted in the moment.

“Barstool is challenging because it’s anonymous and there is no way for us to verify where it came from. I don’t even know what location it was in,” said Charles Couture, the resident district manager of QU Dining. “I believe in this case, it wasn’t even chicken. It was a piece of salmon, but I really don’t know that.” 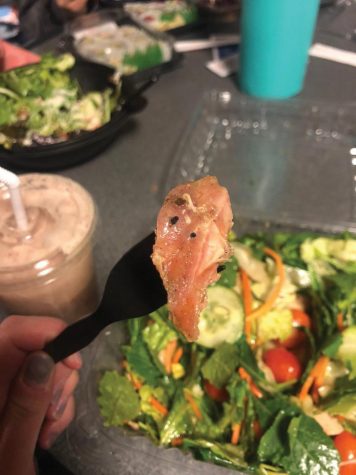 Couture expressed his frustration with the situation and hopes to find ways to better the overall dining experience. He encourages all students to bring their issues with the food immediately to a QU Dining staff member so he or she can rectify the situation and investigate where it came from.

“I wish more students would just come directly to us,” Couture said.“We are always trying to get it right.”

QU Dining plans to continue to listen to student feedback for future advancements to better the university.

“Everything that we’ve done in the past four years has been a direct result of student feedback,” Couture said. “Now every semester we will do new things. Something new somewhere on campus.”