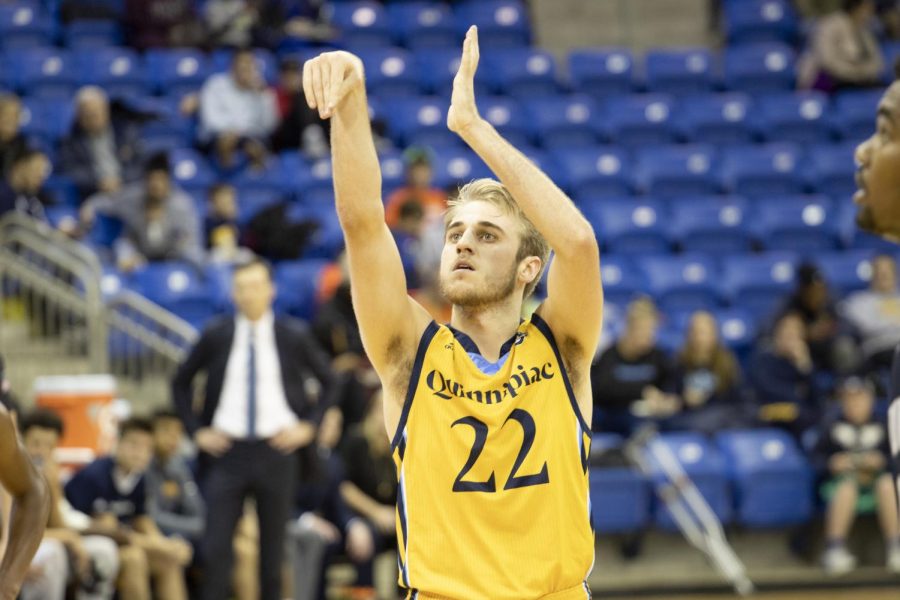 After losing two straight MAAC games, the Quinnipiac men’s basketball team needed its key players to step up in order to get back on track. Junior guard Rich Kelly did just that, as the Bobcats (10-7, 5-2 MAAC) defeated the Fairfield Stags (7-11, 3-4 MAAC) 81-67 on Friday, Jan. 24.

It wasn’t a dominating win, but it was a win that Quinnipiac head coach Baker Dunleavy felt his squad desperately needed.

“Tonight was a game that we needed just in terms of a feeling,” Dunleavy said. “The feeling of not being pretty, at our best or perfect, but being able to grind out and have a good defensive second half to pull away with a win.”

Kelly entered the game 15 points shy of 1,000. He ended the first half with 998 career points, so the moment had to wait till the second half. Kelly has had some of his brightest moments against Fairfield, including scoring his career-high 40 points against them. 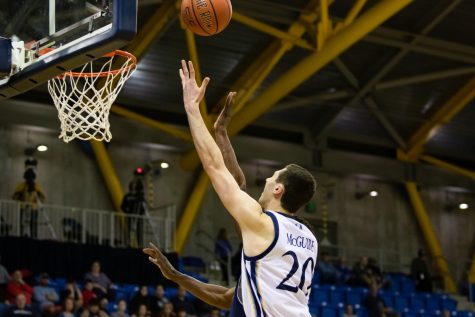 Add the fact that his family was in attendance, and his younger brother John Kelly plays for Fairfield. Kelly’s play has seen him lead Quinnipiac and the MAAC in free-throw percentage, scoring and 3-point percentage.

Kelly’s moment came early in the second half, where he was able to create separation and drain a corner 3-pointer to achieve the milestone.

However, Kelly wasn’t aware that he had actually achieved the milestone. The junior also finished the night with 27 points and six assists.

“I didn’t know until everyone started cheering a little extra,” Kelly said. “Then I was like, alright I probably scored a 1,000 there. It was a cool moment, but I was happy that we were able to stay locked in and get some stops down the stretch.”

The Stags controlled the early portion of the first half, and Dunleavy decided to immediately sub out three of his five starters. One of those subs was sophomore guard Tyree Pickron, who hadn’t seen action all season.

Pickron made his presence felt, as he hit a 3-pointer and gave the Bobcats a much-needed spark. Those were the only points Pickron had.

“I really liked his energy,” Dunleavy said. “Tyree is the type of person, a selfless teammate who brings everybody else’s energy up.”

The Bobcats ended the first half with a 36-32 lead, due to the efforts of the Stags senior forward Landon Taliaferro. The Stags leading point scorer finished the half with 12 points and kept the Stags hanging around.

Quinnipiac was able to settle into a rhythm in the second half and part of that was due to the contributions of redshirt junior forward Kevin Marfo.

Marfo’s recorded a double-double (double digits in points and rebounds) in the last two games, but he had a tough test going against Fairfield. Fairfield leads the MAAC in defensive rebounding, but Marfo — one of the country’s top rebounders — was able to have his way.

He finished the game with 15 total rebounds and 12 defensive rebounds. Marfo isn’t concerned with the numbers and lets his actions do the talking.

“I just see them as any other team,” Marfo said. “It’s really no fear in my mindset. The mentality is have them stop me. I don’t really get tensed up about that stuff because I know what I can do personally.”

Quinnipiac’s win means it is in sole possession of first place with a 5-2 conference record. The Bobcats will travel to Albany, New York, on Sunday, Jan. 26, to play against the Siena Saints (8-9 , 4-4 MAAC) at 2 p.m.