Quinnipiac defeats UConn on day one of the Connecticut Ice tournament 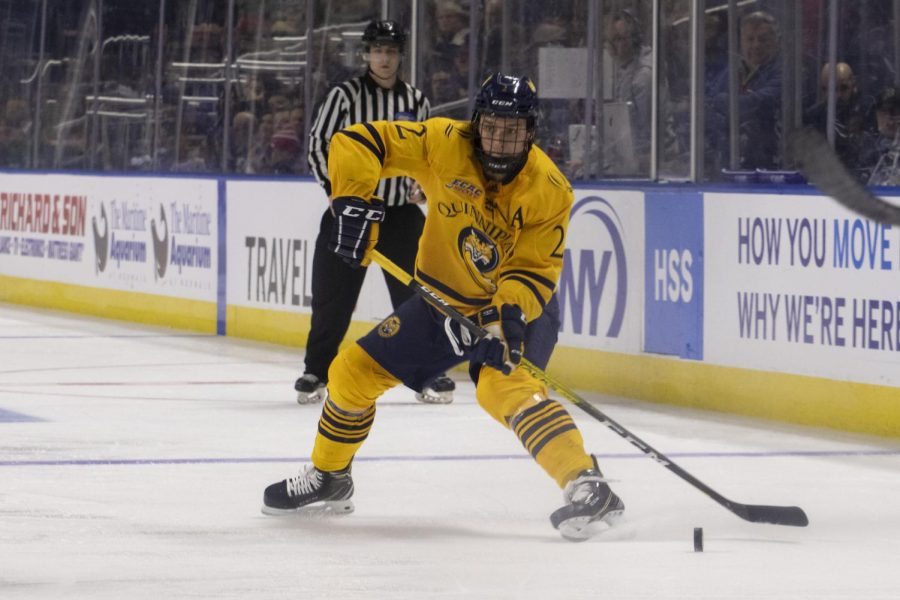 In late 2019, Sportsnet New York (SNY) announced it would sponsor the first ever Connecticut Ice tournament. It was set to take place in January of 2020 and feature Quinnipiac, Sacred Heart, UConn and Yale.

While Quinnipiac head coach Rand Pecknold was satisfied with the result, he also made sure to credit UConn’s efforts.

“I thought it was a great win … for us,” Pecknold said. “I was really impressed with UConn, I thought they dominated us in the first period. I thought they were all over us, and we struggled to show our maturity.”

“We carried play in the first period,” Cavanaugh said. “I think Quinnipiac carried the play in the second period. In the third period, especially towards the end I thought we played really well. That’s a great hockey team, that’s battled tested in a lot of big tournament games.”

As for the first period, UConn got things started. Huskies captain and senior defenseman Wyatt Newpower took a shot on the Bobcats junior goaltender Keith Petruzzelli, but Islanders prospect and sophomore center Ruslan Iskahakov was in position to put in the rebound, putting the Huskies up 1-0.

The first period ended with four goals, but Quinnipiac senior forward and captain Nick Jermain described how his team’s efforts weren’t up to standard.

“That was probably the worst period of the year,” Jermain said. “The older guys in the room yelled a little bit and got us going. Coach (Pecknold) told us to calm down and take a breath, and that’s really what we needed.”

Jermain’s intermission actions had positive effects on the ice, as he gained possession in UConn’s offensive zone. The puck went to the corner, and Jermain settled the puck behind the net. Jermain was able to slide the puck off of Vomacka’s back into the net to put Quinnipiac up 3-2.

As for the tournament itself, Pecknold is pleased that SNY made it happen.

“I’m excited we started this tournament,” Pecknold said. “Just looking at the room, this like the Frozen Four with the media attention we have. We appreciate SNY getting this off the ground.”