Since coming back from winter break, Quinnipiac men’s ice hockey has looked like itself again 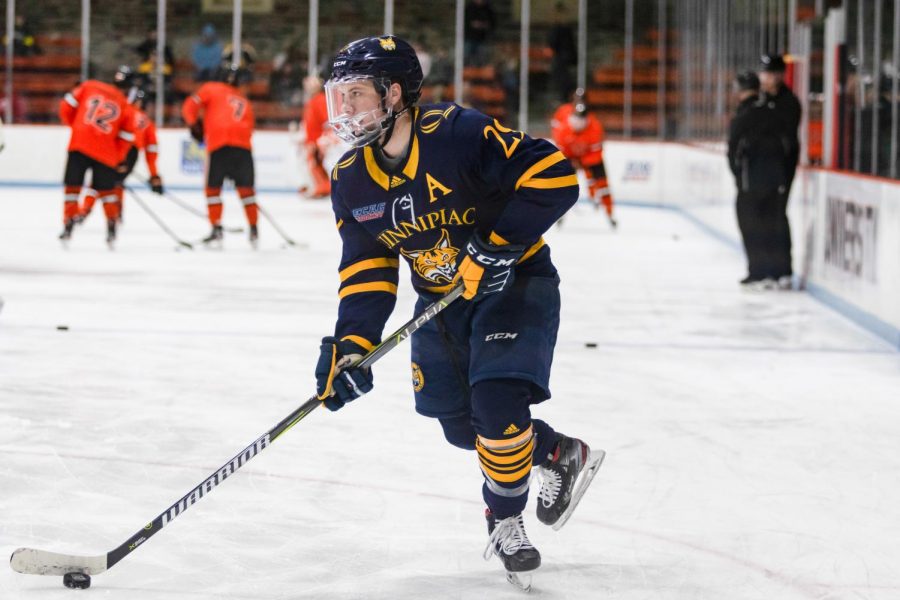 Heading into winter break, the Quinnipiac men’s ice hockey team had some serious concerns on its hands.

The offense was averaging only 2.2 goals per game. Quinnipiac had slipped out of the USCHO top 20 and were near the bottom of the conference standings after being predicted to finish No. 2.

But who knew that all the team needed was some time with its families, home-cooked meals and the thrill of the holidays.

It’s been an entirely different look for the blue and gold since they’ve returned from their hiatus. The Bobcats have shot up the ECAC Hockey standings, going 5-1-0 in conference play since coming back from the break. Currently, the Bobcats are in a four-way tie for third place with 15 points.

In those six conference games, as well as Friday’s non-conference win against Holy Cross, the Bobcats’ offense has been firing on all cylinders. It’s averaging 3.9 goals per game since Dec. 28, highlighted by a weekend sweep of Harvard and Dartmouth in which it outscored the two foes 11-2.

Three Bobcats have points in all but one game since the time off — senior forward Alex Whelan, junior forward Odeen Tufto and sophomore defenseman Peter DiLiberatore. Is that good? I’d say so.

For Whelan, who missed five games earlier this season, the break provided time for rest and recovery, and he has returned to his energetic self. As a result, the senior has recorded six goals and three assists in the last seven games, topped off with a hat trick last game against Holy Cross.

Tufto had a rough stretch heading into the holidays, going pointless in the team’s last four games before the time off. However, he’s back to his normal self with 12 points in the last seven games. His 22 assists lead the conference, and his 25 points on the season are tied for second.

While Tufto stayed humble and credited his linemates and teammates for his success, his teammates voiced their praise of his work ethic.

“You can’t say good enough stuff about (Tufto), he’s always in here working his ass off,” junior goaltender Keith Petruzzelli said. “He’s always doing extra stuff on the ice after (practice) or in the gym.”

DiLiberatore, one of the last cuts for Team Canada for the World Juniors, had a  rough patch similar to that of Tufto. DiLiberatore closed out the first half of the season with only one point in the previous nine games, but he’s been constantly finding his name on the scoresheet as of late with seven points coming after the holiday break.

Looking at individual performances, it’s hard not to acknowledge Petruzzelli and sophomore forward Wyatt Bongiovanni. Bongiovanni has been one of the most consistent goal scorers this season with 11, which leads the team and is also tied for second in the conference. He’s come out flying since the start of the second half of the season, scoring five goals in the first four games.

Petruzzelli has started every game this season for the Bobcats and has stepped up to the task. The junior is getting his first full year as the No. 1 goaltender and after a bit of a slow start, Petruzzelli has been one of the better goaltenders in the conference. He sports a 2.25 goals against average and his save percentage stands at .912.

It appears he won’t be getting much help from freshman goaltender Evan Fear, who hasn’t seen playing time since Nov. 9’s loss to Harvard, a 7-2 blowout. Junior goaltender Josh Mayanja has played only two minutes all season and likely won’t contribute more this year either. It’s obvious Quinnipiac will be riding with Petruzzelli for the rest of the season, and you have to wonder when fatigue will eventually hit the Detroit Red Wings’ prospect.

You know what else has made a difference? The power play.

In the 15 games during the first half of the schedule, the Bobcats potted only seven goals with the man advantage. They’ve matched that total in these last seven games, bringing their power play percentage up to 17.2%. Bongiovanni has four power play goals, which has him tied for fourth in ECAC Hockey.

Looking at what has remained consistent is in the faceoff dot. The Bobcats have been one of the best faceoff teams in the entire nation for the whole season, and now find themselves at No. 1. The Bobcats’ .560 win percentage is the best in all of Division I, thanks to Tufto, sophomore forwards William Fällstrӧm and Desi Burgart and freshman Skyler Brind’Amour, who all have a win percentage over 55%. Those faceoff wins are finally resulting in pucks in the back of the net.

“We’ve been winning a lot of draws, our faceoffs have been really good this year,” Quinnipiac head coach Rand Pecknold said. “Earlier in the season, we were winning all these draws and weren’t getting goals from them, so it’s nice that they’re coming in bunches.”

Up next, Quinnipiac will be participating in the first ever Connecticut Ice tournament this weekend. It has drawn a matchup with UConn on Saturday, Jan. 22, at 4 p.m., with the winner of that game playing Sunday, Jan. 23, at 7 p.m. It’s an opportunity for the Bobcats to build momentum before conference play finishes out the season.

“I’d like to thank SNY for helping put this together, it has been in talks for a while getting an all Connecticut tournament, and they helped put it over the edge,” Pecknold said in October when the matchups were announced. “I hope this is something that we can do year in, year out. It’s great for the state of Connecticut.”