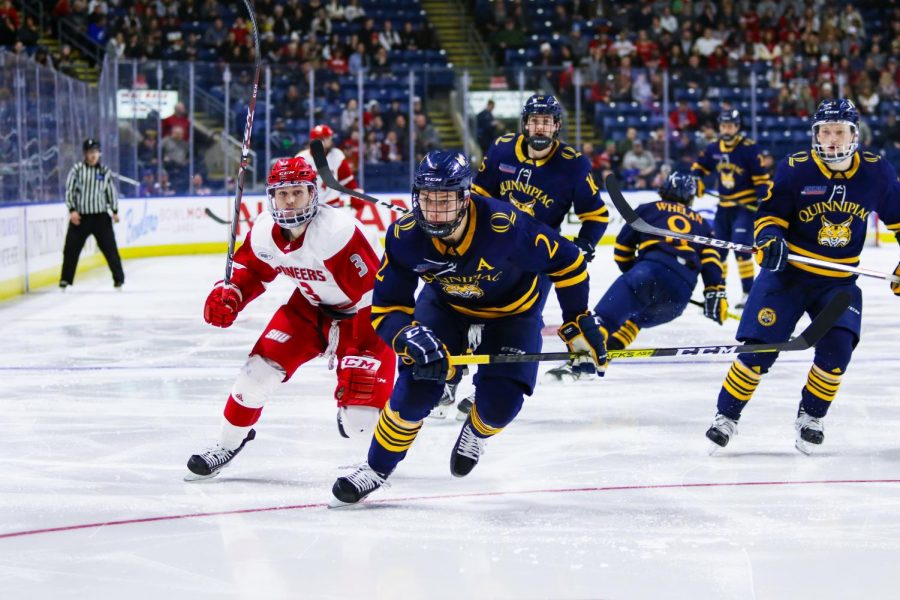 As the final buzzer sounded the Sacred Heart Pioneers flooded the ice while sticks, gloves, and helmets flew all over the place as they skated towards their sophomore goaltender Josh Benson to celebrate winning the inaugural Connecticut Ice tournament. This is the program’s first championship since joining the Atlantic Hockey Conference in 2003-04.

At the other end of the ice, the Bobcats could do nothing other than painfully stare at the ecstatic Pioneer squad.

“The best lesson of the night was Sacred Heart’s celebration, it was awesome,” Quinnipiac head coach Rand Pecknold said. “It teaches you those kids wanted it, they wanted this win. They deserved it. It was awesome to see that celebration, that energy, that enthusiasm, that passion. That’s what we need to take away from the game.”

After defeating UConn 3-2 the night prior, Quinnipiac came out strong to start the game, forcing turnovers on a relentless forecheck. It maintained the majority of puck possession throughout the period and generated several prime scoring opportunities, all snuffed out by Benson.

Karlis Cukste, a senior defenseman for Quinnipiac, netted the game’s first goal just about midway through the first as Quinnipiac seemingly had Sacred Heart on the ropes.

As the second period began, Sacred Heart took Quinnipiac’s energy and aggression and threw it right back in its face. The Pioneers forced several neutral-zone turnovers and created multiple odd-man breaks going the other way, preventing any sustained pressure from the Quinnipiac offense.

“After that first period, I thought Quinnipiac really had us on our heels. We weren’t playing our game, and I think that had a lot to do with how Quinnipiac played,” Sacred Heart head coach C.J. Marottolo said. “They’re a really detailed team, they’re very structured and have a lot of skill. But I thought in the second period we found our way a little bit. Our speed got loose a little bit and that’s our game.”

It took only five minutes before Sacred Heart junior forwards Jordan Kaplan and Marcus Joseph worked the puck down low and sucked out the Quinnipiac defense, freeing up sophomore forward Ryan Steele to tie the game at one.

The Bobcats began to regain some traction after solid back-to-back shifts from their top two lines. But Benson continued to stifle the Bobcat offense, even in net-front scrambles.

“Josh Benson was terrific and our guys were laying out and paying a price,” Marottolo said. “I couldn’t be prouder of their effort tonight.”

Quinnipiac’s lack of execution on those shifts led to another strike from Sacred Heart.

Pioneers junior forward Evan Wisocky and sophomore forward Nick Boyagian charged into the zone abutting the Sacred Heart penalty box. Wisocky cut across the middle and dropped the puck to sophomore forward Todd Goehring. As Wisocky drove through the defenseman, Goehring caught Quinnipiac’s freshman defenseman Logan Britt in no man’s land and fired a lethal wrist shot over the glove and shoulder of junior goaltender Keith Petruzelli bar down.

Goehring proceeded to jump into the plexiglass in front of the sea of red as the Sacred Heart bench erupted.

A minute later, Sacred Heart’s senior forward and captain Jason Cotton received a pass from junior forward Matt Tugnutt and found plenty of room low in the zone and proceeded to walk in on Quinnipiac’s junior goaltender and placed a shot over his blocker. Whatever energy the Bobcats had, it now belonged to the Pioneers as they led 3-1.

“Just from where the program was and where it is now it’s unbelievable the growth. Not only the guys in the locker room but the senior classes before us and before them. They came in and left it in a better place than where it was,” Cotton said. “Going home tonight and just thinking about it, it’s going to be a lifetime memory.”

Quinnipiac adjusted its play in the third period hoping to generate some momentum in its favor. However, its efforts were fruitless as it failed to capitalize on two third-period power-plays.

With Quinnipiac’s net empty Sacred Heart’s freshman forward Braeden Tuck fought off a Quinnipiac defender and poked home the dagger. The Pioneers sealed a 4-1 victory and the Connecticut Ice Championship.

Not only was this a substantial win for Sacred Heart in terms of standings and PairWise rankings, but it was an emotional one as well. Marottolo was noticeably emotional with tears in his eyes during the post-game press conference.

“I congratulate CJ and Sacred Heart, I thought they played great tonight,” Pecknold said. “I’ve known CJ for a long time. Certainly, we’re disappointed with how we played but happy for him.”