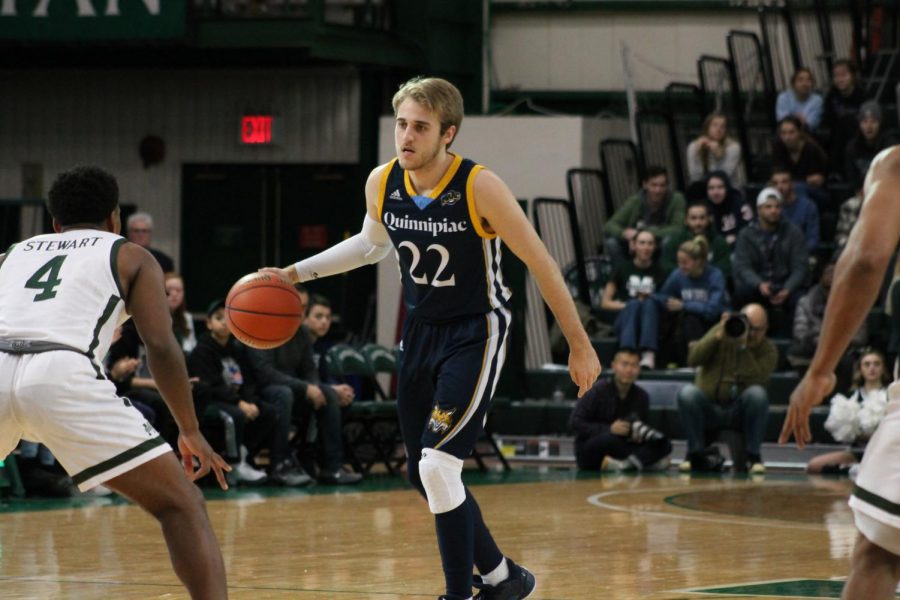 There’s a first time for everything. Tonight, it was Quinnipiac men’s basketball’s first MAAC loss of the season.

The Manhattan Jaspers defeated the Bobcats 69-57 on Thursday, Jan. 16, at the Draddy Gymnasium in Riverdale, New York.

“You got to have great mental and physical toughness to compete in a MAAC road game,” Quinnipiac head coach Baker Dunleavy said. “It’s a complete grind. I thought the energy and physicality was initiated by Manhattan in a great way.”

That toughness was tested early on as the Jaspers (8-6, 4-1 MAAC) set up in a full-court press, forcing multiple Bobcat turnovers. Manhattan stayed in the press all game, and Quinnipiac ended with 15 turnovers to just 13 assists.

The Bobcats (9-6, 4-1 MAAC) and the Jaspers started the game shooting poorly from the field. At the under-12-minute media timeout, Quinnipiac was shooting 33.3% from the field compared to Manhattan’s 26.3%.

Still, the Jaspers, led by sophomore guard Samir Stewart, garnered a 27-18 lead that they held throughout the second half.

Stewart, who scored 20 points, fueled a 10-5 Manhattan run prior to the under-eight-minute media timeout in the second half. His scoring played a huge factor in Quinnipiac’s loss, and Dunleavy regretted how the team guarded him.

“(Stewart) really stepped up to the plate, was aggressive and shot the ball,” Dunleavy said. “I think we had some let downs in terms of execution in our defensive gameplan. But also, he just played great.”

Despite enduring its first MAAC loss of the season, the Bobcats have experienced significant growth, and the effects have been obvious to Dunleavy.
Redshirt freshman Matt Balanc was inserted into the starting lineup for sophomore guard Tyrese Williams. This was Balanc’s first collegiate start, scoring 13 points on 5-of-8 shooting from the field.

Entering the season, Balanc was expected to be a spark plug off the bench for the Bobcats, but his growth has earned him more minutes.

Likewise, freshman forward Brendan McGuire has started in five straight games — all MAAC contests. Despite being 6-foot-7, he brings a level of playmaking and speed to the floor that players his height aren’t typically capable of. In just his third start, he tallied 10 assists to just two turnovers.

“(They are) young guys that are talented that want to do the right things, but when the game goes fast, they don’t know what the right things are quite yet in terms of just consistently,” Dunleavy said. “There’s talent there and great character, so we think those guys are going to be really good for us.”

Quinnipiac has a quick turnaround as it plays its sixth MAAC game of the season against the Saint Peter’s Peacocks on Saturday, Jan. 18, at 4:30 p.m. in Hamden.

“We’re going to have to be very concise with how we review what happened in this game and then move forward pretty efficiently,” Dunleavy said.