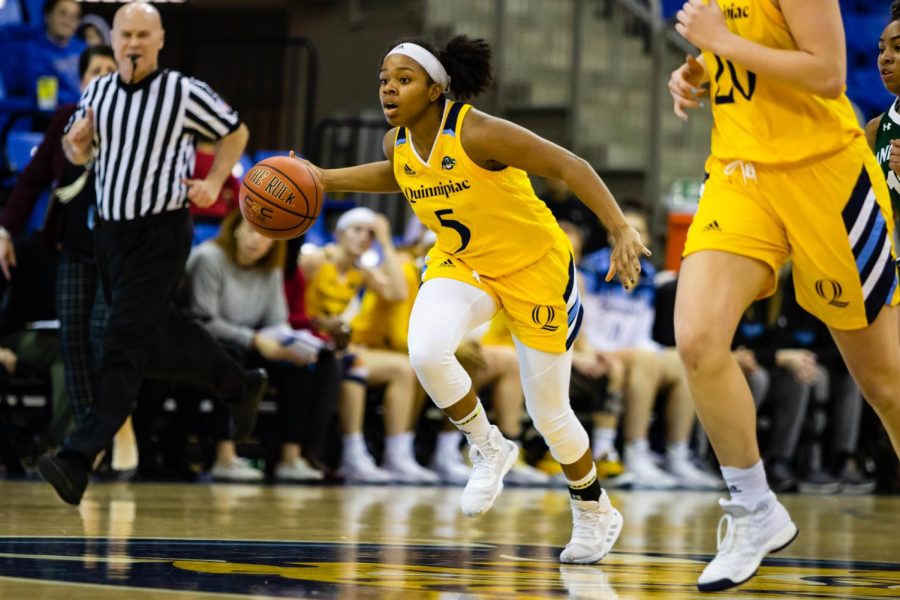 Junior guard Shaq Edwards has helped guide the Bobcats to the fifth seed in the MAAC tournament this season.

While most people spend their Thursday afternoons at work or in school, inside the People’s United Center, almost 3,000 students from local schools were rooting for the Quinnipiac Bobcats women’s basketball team in a 60-53 victory over the Monmouth Hawks.

“I loved the vibe,” sophomore guard Mackenzie DeWees said. “I loved the kids. I’m waving. I love it. I think it’s a good energy to feed off of, and we need more of that.”

The energy may have been a little overwhelming at the start of the game. Both teams individually shot 4-for-18 from the field in the first quarter as the Bobcats took an early 14-11 lead. The crowd brought energy, but it resulted in a disjointed Bobcats offense as redshirt junior guard Shaq Edwards said she had trouble communicating the plays to her teammates.

The second quarter began trending upward for the Bobcats as DeWees and freshman forward Cur’Tiera Haywood both scored second-chance points on aggressive offensive rebounds. However, the team spent the last seven minutes of the quarter unable to make a single shot from the field as it entered halftime down 26-21.

For the second straight game, the Bobcats refocused in the third quarter after spending most of the season struggling in the period. The Bobcats found success driving to the basket and drawing fouls as they made 11 free throws in the frame, more than the Hawks made all game.

“We had a good third quarter in the previous game as well, and it’s been our Achilles’ heel this year,” assistant coach Brian Wilson said. “We’ve got a little bit of consistency. Just really emphasizing ‘We’ve got to come out of the locker room with a ton of energy,’ and we did today. We came out, and we were on fire.”

The Bobcats scored 28 points in the third quarter, their highest scoring quarter of the season. Edwards and Haywood led the team in the period with eight points apiece.

After failing to score in her last two games, Haywood finished with a career-high 17 points on 4-for-6 shooting while making a career-high seven free throws.

“My last few games I haven’t really contributed much to the team,” Haywood said. “I really just sat back and figured out what I need to do, and it was being more aggressive, definitely on the offensive and defensive boards.”

The Bobcats came close to giving up the lead with two minutes left in the fourth quarter as the Hawks cut the lead to six points. After working on defense all practice, it was two key defensive stops with less than a minute to go that sealed the victory.

“We felt that our defense was much improved,” Wilson said. “We spent a lot of time on our defense in practices, that was really our emphasis.”

Since Edwards’ return from injury, the Bobcats have frequently used a lineup involving three traditional guard players in DeWees, Edwards, and senior guard Taylor Herd. In the last two games, they’ve combined to score over 60% of the team’s points.

“I think we’ve had awesome success playing together,” Herd said. “I think playing with 3 guards we have the mentality of scoring and the mentality of passing. I think that’s great we look for each other all the time, and we’re able to see the post well.”

The Bobcats face the Canisius Golden Griffins on Saturday, Jan. 16, to complete their three-game home stand. They currently sit in sixth place in the MAAC standings but their momentum seems to leave them unfazed.

“We’re not sitting where we usually are in the standings but the standings in January don’t matter as much as what we’re playing and trying to get better for, you know, where we’re going to be in March,” Wilson said.