‘The Report’ shines light on a dark chapter in U.S. history

Amazon’s political drama shows that truth is not given, but earned through obsessed-driven work 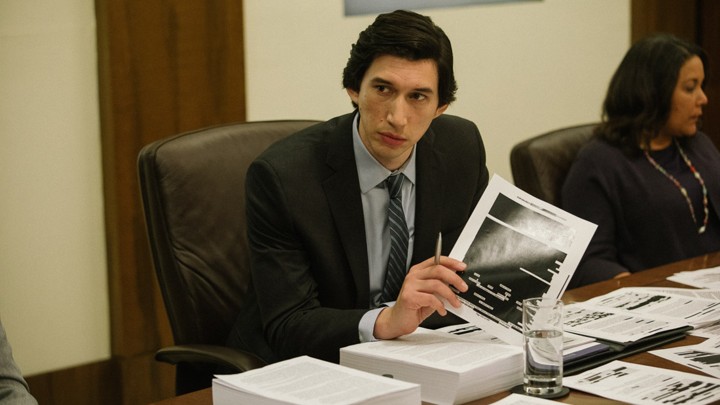 In the film, 'The Report,' Adam Driver played Daniel Jones who led an investigation into the CIA's detention and interrogation programs after 9/11.

Did any actor have a better end to the decade than Adam Driver? A credit in one “Star Wars” film should qualify as a successful year for any Hollywood lead, but he didn’t stop there. Along with “Marriage Story” and now, Amazon Studios’ “The Report,” Driver’s 2019 was an impressive follow-up to 2018, when he starred in Spike Lee’s “Black KkKlansman.” His performance in “Marriage Story” will deservedly place him in prime consideration for awards, but don’t let Scott Z. Burns’ directorial debut, “The Report,” go unnoticed.

Driver offers a gripping, believable and intelligent portrayal of the likable Senate staffer, Daniel J. Jones. He is tabbed by California Senator Dianne Feinstein (Annette Bening) to lead the Senate investigation into the CIA’s post-9/11 Detention and Interrogation Program. The full, 6,700-page report (commonly referred to as the Torture Report) remains classified, though a 500-word summary was released in 2014.

We never truly get to know the Daniel Jones beyond the report, but do we really need to? Very little of his background information is offered outside of the film’s opening minutes. He is driven in his pursuits, a lovable nerd who gives any task his devout attention. It’s immediately clear that the only focus, and the audiences, is what he discovers through his research.

He is not afraid to stand his ground, even when CIA officials berate him for the report’s findings or falsely accuse him of hacking CIA computers. His anger is believable, contained and shared with audiences. As Jones dives deeper into the millions of documents available to him, he quickly becomes obsessed with the report. He doesn’t want to know simply just what happened. He is determined to discover who knew about the years of torture, why it was allowed to happen and who needs to be held accountable for it.

Driver portrays Jones with such an unflappable determination that it seems difficult for audiences not to take his side. One of the film’s greatest strengths is its ability to remain mostly neutral. Burns makes a conscious effort not to solely praise Democrat leadership, or to emphasize the pitfalls of Republican senators who thought little of the report.

Driver is the catalyst behind the slow-burning story, but Burns and casting director, Avy Kaufman, assembled a well-rounded supporting ensemble, too. Ted Levine portrays former-CIA Director, John Brennan, with tenacity and power. As President Barack Obama’s Chief of Staff Denis McDonough, Jon Hamm serves as a tough, often questionable figure in Jones’ rise through what he calls “behind the scenes” work. In a limited role, Tim Blake Nelson represents a tragically honest human figure amidst the shocking, brutal torture methods at their peak. The terrific Matthew Rhys plays a New York Times journalist who blows the whistle on Jones’ findings, similar to his portrayal of Daniel Ellsberg in 2017’s “The Post.”

Some will criticize “The Report” for its frequent scenes of heavy dialogue. It indeed can feel wordy at times, but Burns does an excellent job of condensing an immense amount of material and research into a tidy two hours. The depictions of torture are very realistic and quite hard to stomach at times. They serve as the only real “action” of the film, as breaks between word-heavy moments and visuals of real atrocities committed by the highest levels of U.S. government. This isn’t a movie you will want to watch again soon, but you will walk away feeling changed. Isn’t that what an impactful film is supposed to do?

“The Report” may not pack theaters, nor will it rise to the forefront of top movie discussion in 2020. One thing is clear, it’s a film that will one day be looked back on as vital for the time it was made. It will serve as a testament to the lengths governments will go to cover its trails. It isn’t quite on the level of  “All the President’s Men,” but citizens will very likely look back at “The Report” and be reminded once again of how history has a habit of repeating itself.

It seems fitting that many watched this film during an ongoing period of questionable leadership in the United States. Whether it was President Donald Trump’s impeachment, or more recently, his incredibly risky decision to kill a top Iranian military leader, “The Report”seems to have been released at just the right time. In a time where U.S. citizens are again having a hard time believing the agencies that are supposed to protect us, “The Report” is a cautious reminder of a past that isn’t that long ago.