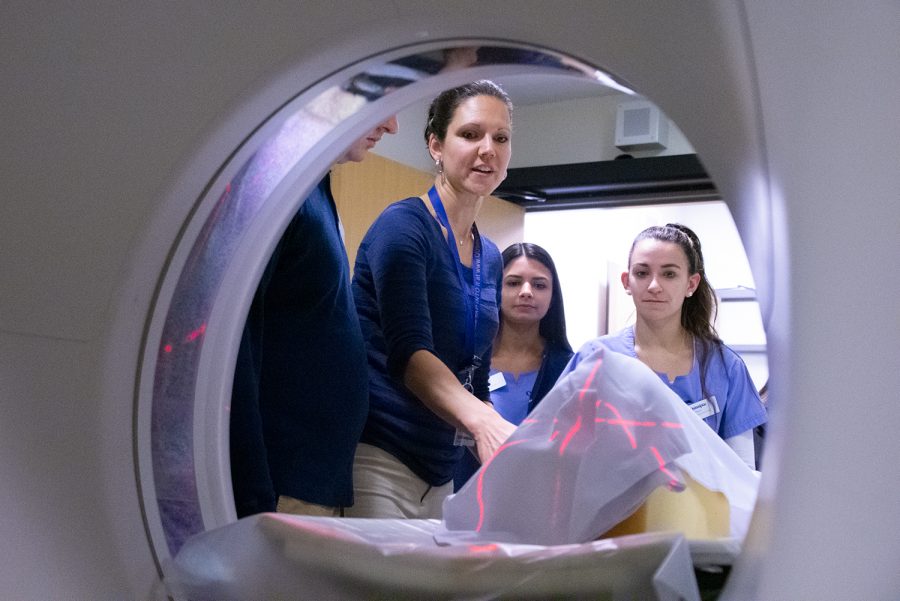 Quinnipiac radiologic sciences students imaging skeletal remains. Remains must be covered unless there is permission from familial descendants.

Quinnipiac University’s Bioanthropology Research Institute is the first stop of a long archeological process determining the historical significance of three skeletal remains that were found under a Ridgefield home during a house renovation in early December 2019.

The university held an event on Friday as part of the process to determine the historical accuracy of the hypothesis that the remains are from Revolutionary War soldiers from the Battle of Ridgefield, which took place in April 1777.

The house was built in the late 1700s, and the remains were found with buttons that are possibly from military uniforms.

Subsequent excavations by state archaeologist Nicholas Bellanton found that “The skeletons were found ‘contorted and confined’ in a hole that was relatively shallow — about three to four feet below the gravel floor of the home’s basement,” according to a press release.

Experts examining the shallow grave say that soldiers during the war would be stripped of their uniforms and put on the next soldiers, which can be an explanation of why the buttons were found with the remains.

Jerry Conlouge, co-director of the Bioanthropology Research Institute, believes these remains are part of a mass grave from this battle. He said he wishes that they could have brought a portable X-ray machine to better determine that there could be more bodies found underneath, but since this is under a home they cannot do more research under the building to officially confirm this opinion.

During the event, there were three radiologic sciences undergraduate students partaking in the scanning of each individual bone while one anthropology student was helping to determine the bones and isotopes with the Bioanthropology Research Institute team.

Although Quinnipiac is only a small part of the research process, this can be a huge learning opportunity for the students and bring publicity to the university.

“Research Institute at Quinnipiac University has a long history of working with the state archaeologist on skeletons of historical and archaeological significance,” said Jaime Ullinger, associate professor of anthropology and co-director of the Bioanthropology Research Institute. “We can provide imaging technology and anthropological expertise in order to learn more information about Connecticut’s recent and ancient past. We involve our students in our research, which gives them hands-on opportunities to learn about radiography and anthropology, as well as a chance to contribute to our knowledge of human history in Connecticut.”

Anthropologists and their students began putting the bones together and individually scanning to find the approximate age of the bones.

“One of the beauties of this is we do not have preconceived ideas that skeleton could have come from a lab so we do not know, and that’s the best way to approach this I am not looking to prove anything I am just telling people what is there,” Conlouge said. “Once we are finished with the X-ray analysts we are done and it is someone else’s challenge.”

This research is beneficial for all students currently working on this and future students. The next step will be sent to Yale University for further investigation.

“They are going to Yale and that might take a year and do DNA is this a British individual or American individual,” Conlouge said. “These are calls that will be made later.”