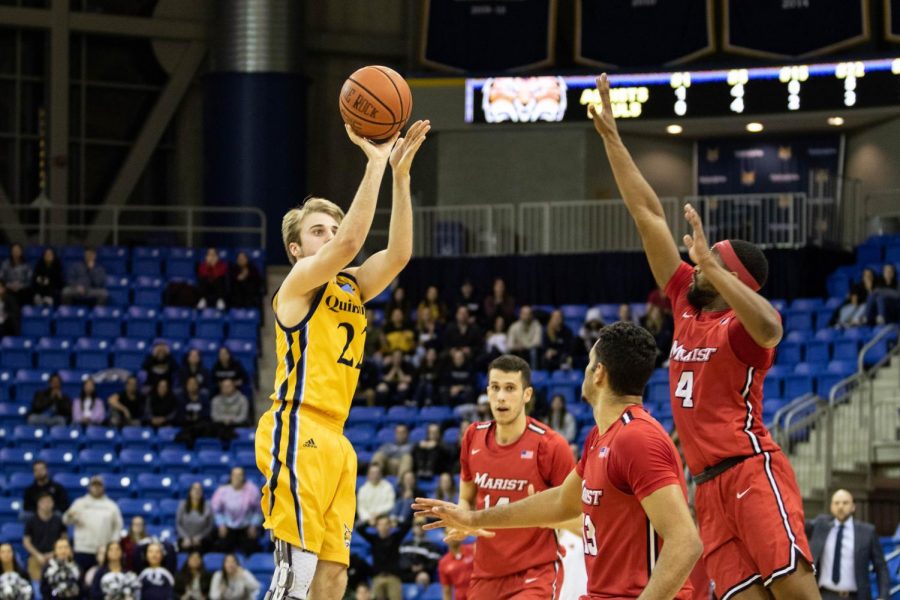 Since math was introduced to the world, people agreed that three is greater than two. Whether it’s shown on a number line, a bar graph, the amount of Bobcats in a forest or points in a basketball game, the statement holds true.

Specifically in basketball, the 3-point shot holds more value than a 2-point shot. Understandably, the 3-point line is farther from the basket but because of the increased value the shot provides, it is emphasized in high school, college and professional settings.

The Quinnipiac men’s basketball team and head coach Baker Dunleavy have stressed this system, and it’s brought early-season success to the team.

“It’s a big thing of what coach is telling us he wants all of us to do,” graduate student forward Aaron Falzon said prior to the season opener. “To be able to space the floor and shoot the 3.”

Through seven games, the Bobcats are 3-4 with wins against Albany, Presbyterian and New Hampshire.

Rich Kelly, Quinnipiac junior guard and member of the Preseason All-MAAC First team, has been the catalyst to the team’s 3-point success.

He’s no stranger to this role as just last season, he led the team in 3-point percentage with a 45.7% mark from distance — an improvement from 31.7% freshman year.

“My freshman year, I was very fatigued physically. I didn’t have any legs in my jump shot,” Kelly said before his junior season. “I was watching guys like Steve Nash, Steph Curry, Damian Lillard with lower releases to make it quicker and more efficient. And I kind of just tried to replicate what they do with my own natural tendencies.”

With the addition of redshirt freshman Savion Lewis, Kelly often shares playmaking responsibilities. That said, Kelly has shifted his game to become a more dynamic scorer while still being a strong facilitator.

Prior to the regular season, Kelly said he hasn’t played shooting guard much since junior year of high school at Fairfield Prep.

Despite more offensive responsibilities, Kelly has maintained success from 3-point land. He’s leading the team with a 44.4% mark from 3 on a team-high 6.4 attempts per game — 1.1 more than last year.

When he’s not draining 3-pointers, Kelly runs the offense with 3-point shooters Falzon and junior forward Jacob Rigoni alongside him in the starting lineup.

Falzon enrolled in Northwestern in 2015 after being ranked the 75th best player in his class by ESPN. He immediately became a reliable shooter at the collegiate level, knocking down 63 3-pointers — the second most by a freshman in Northwestern history.

Injury-riddled seasons followed, and Falzon started his graduate season at Quinnipiac 1-of-10 from deep. He’s 12-of-32 since, good for 37.5% over that stretch.

His frontcourt partner, Rigoni, has been a strong 3-point shooter in all of his three seasons at Quinnipiac. He shot 45.5% in his freshman season which ranked 15th among players that shot at least 150 3-pointers in Division I.

Lastly, a new addition to the rotation — redshirt freshman Matt Balanc — has been on fire from distance to begin the season. He’s shooting 44% from 3, second on the team behind Kelly, and has four games in which he’s made at least two 3-pointers.

“(The 3-point shooting) kind of sets the table for a lot,” Dunleavy said. “I think it’s probably what teams come into the game thinking about the most when they think about us.”

Still, even with teams strategizing against the Bobcats’ 3-point shooting, the team continues to focus on the deep ball. Dunleavy has pushed the Bobcats to take a lot of 3-pointers but to remember to never settle for bad shots.

“I think our 3-point shooting is working for us,” Dunleavy said. “In fact, we went 8-of-17 today. (New Hampshire) did a great job of limiting our attempts, but we need to take closer to double that number.”