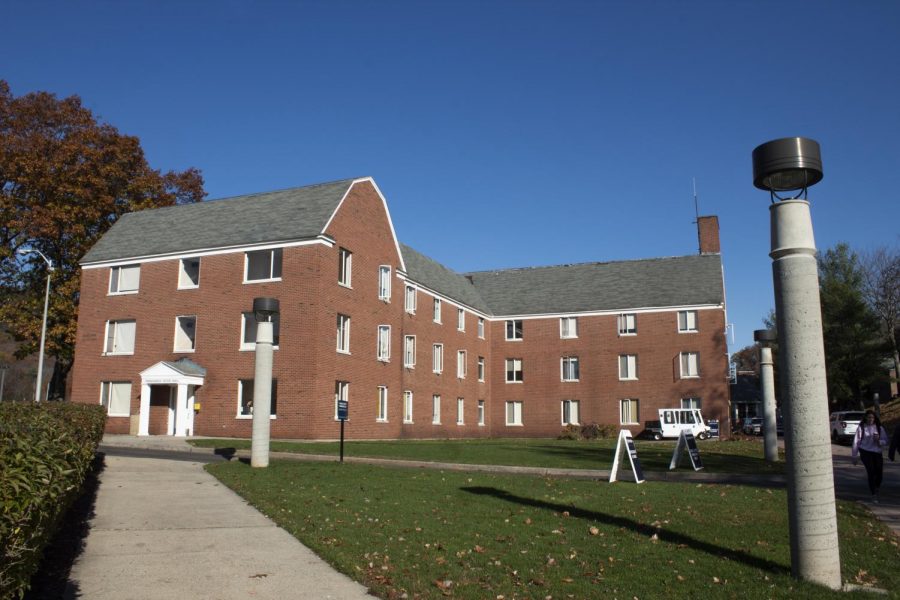 Ayer Saint Gross (ASG), the company hired by Quinnipiac University to draft its facilities master plan, presented its research on the university’s available space and potential changes coming to Quinnipiac in a meeting open to students on Dec. 5.

ASG highlighted poor conditions in some of the residence halls in its presentation. It also pointed out high vacancy rates in sophmore and upperclass housing but overcrowding in freshman residence halls as well as inconsistent identities across campuses.

“All three campuses lack a strong sense of connection between the campuses, as well as their host communities.” said one of ASG’s representatives.

In their prior meetings with students, ASG found that a major concern was the lack of pedestrian access between the university and its surrounding community. ASG said that with only a single sidewalk leaving the Mount Carmel campus and no sidewalks leading out of the York Hill campus, Quinnipiac’s connection to the local community of Hamden is severed. This concern also ties into the current issue of accessibility on campus with buildings such as the Arnold Schweitzer Institute being unsafe for pedestrians and handicapped students

In their research, ASG found that residence halls on Mount Carmel, namely Dana, Irma, Hill and Bakke were in poor condition and Quinnipiac’s housing in general has a backlog of “deferred maintenance.”

“I think the biggest (problem) is the residence halls,” said Austin Calvo, Student Government Association (SGA) president.“I think they are very outdated and what we charge for them is insane compared to other universities that have (been) built in this decade.”

While the presenters said their ideas mainly focus on renovating the existing residence halls and catching up on deferred maintenance, they did mention the possibility of removing Dana and Irma to make room for new construction.

ASG also addressed the inconsistency of vacancies between buildings. The residence halls Crescent, Sahlin, Bakke and Founders have over 10% vacancy in the buildings, meaning that only 90% of the building’s bed are being used, according to ASG’s research. On the other hand, in the freshman dorm Ledges, overcrowding has led to non-residential rooms being converted to meet the demand for accommodation.

Other topics are their research included the aesthetics of the school and their impact on identity and access to recreation space on the campus. ASG noted that through their conversations with students they found that the natural beauty of Quinnipiac’s campus is an important aspect of the university. With this in mind, they’re planning on taking a sustainable approach to future development, something that had not been a focus of the university in the past.

The Mount Carmel campus’ green-space was mentioned as an important part of the school’s image, however according to ASG, students raised concern that the access to the fields is difficult for students outside of the athletic program and there is a lack of outdoor recreation space on York Hill. Coupled together, these problems led students to feel like their access to recreation space outdoors was minimal according to ASG’s research.

Quinnipiac University and ASG plan on releasing the new master facilities plan in May of 2020.