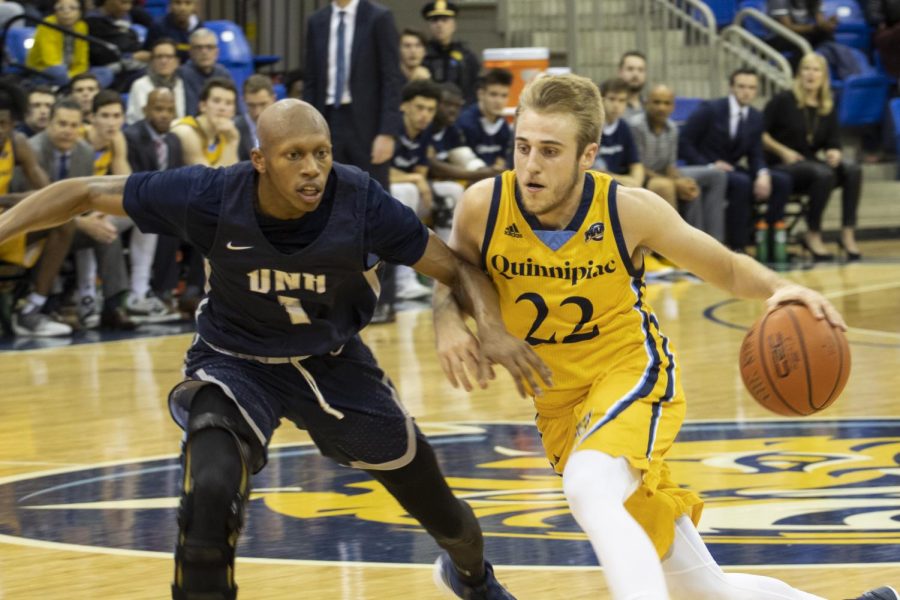 At the end of the first half, Quinnipiac led 26-24. However, junior guard Rich Kelly urged his teammates to keep up the energy as there was still another half to play. Kelly led by example, scoring 26 of his 36 points in the second half, to help lead the Bobcats to a 75-67 victory over the New Hampshire Wildcats.

Neither team could seem to get their footing early on in the opening half. Both teams had their own areas of superiority, but in the same token, they were dominated by the opposition in other areas. Quinnipiac’s steals, field goal percentage, blocks and bench points all outpaced New Hampshire output by a pretty healthy margin. On the flipside, New Hampshire pounded Quinnipiac on the offensive glass all night, grabbing 14 to Quinnipiac’s one while also scoring 15 second chance points to Quinnipiac’s zero.

In addition, the teams combined for 20 turnovers in the first half as neither could pull away. That changed when Kelly started to pile on the points, threatening his career high of 40 points.

After not attempting a single 3-pointer during the first half, Kelly made five of the six he attempted. But when he wasn’t firing away from the top of the 3-point line, Kelly was finding the creases in the defense, getting to the rim almost at his leisure. Even in the midst of a remarkable scoring night, Kelly couldn’t take all the credit.

“Because we have Kevin, my job is much easier getting into the lane,” Kelly said. “I had a bunch of wide-open layups that I feel like I never see because normally his man comes over, I miss the layup, Kevin gets a putback dunk. Tonight, they were like, ‘let’s take him away because I think he’s leading the country in rebounds.’”

Kelly’s constant rim pressure was a huge focal point of the game. Not only did it help put points on the board and help him get to the free-throw line, but having the defense constantly react to Kelly dribble drives, opened up a bunch of good looks for the slew of Bobcats shooters.

Of the 17 attempts from 3-point range, eight of them found the bottom of the net, good for a mark of 47.1%. Even with all the feel-good offensive numbers floating around, Quinnipiac head coach Baker Dunleavy knows that his team has a lot to improve on and his team got lucky with this one.

“I think we’re very fortunate to win this game,” Dunleavy said. “I think we had some great performances especially from Rich Kelly on the offensive end. We’re lucky, we’re fortunate to get this win, we don’t take it for granted. I thought we did some great things and showed a lot of resiliency and toughness.

“But overall, we got a lot to work on here, specifically rebounding the basketball. That’s going to be a challenge all year. We need different guys to step up and do it. But anytime you can get a win against a quality program like UNH, we’re proud of that win. The most important thing is, it’s always easy to learn from a loss because you’re hurt, and when you win there’s joy to that but you still have to find a way to learn.”

Rich Kelly echoed a lot of his coach’s sentiments in terms of areas the team could improve in.

The Bobcats look to build on this win as they play the Maine Black Bears on Sunday, Dec. 15, at 1 p.m. at the Cross Insurance Center.