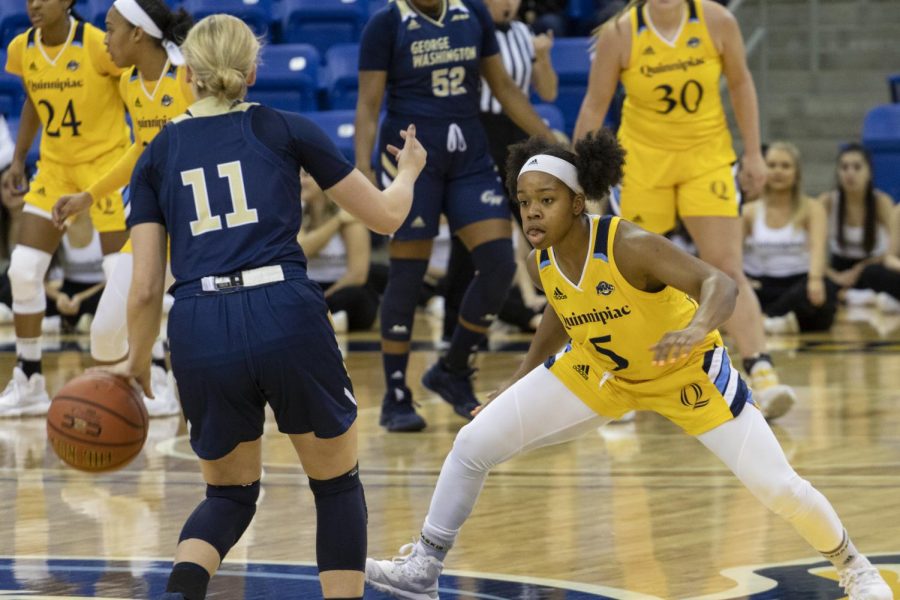 The Quinnipiac women’s basketball team (1-5) suffered its third consecutive loss this afternoon when it fell to the George Washington Colonials (7-3) at Lender Court in the People’s United Center.

The Bobcats got out to a strong start when they led the game 22-11 over the first eight minutes. Freshman forward Cur’Tiera Haywood nailed a couple of 3-pointers in the first quarter, and freshman center Mikala Morris portrayed all the dimensions of her game. Morris nailed a three after Haywood and then went to work in the paint getting easy buckets and layups.

Haywood finished the day with 13 points in her first ever start for the Bobcats, and went 2-5 from 3-point range. She only trailed redshirt junior guard Shaq Edwards in team scoring, who had 18.

“Even when I was sitting on the bench I knew that I had to do my job and do the little things,” Haywood said. “Starting just gave me a little extra push … it’s really big, and I know I can do more and do better than what I did today, so it is important for me to know I can compete to have more come out of myself.”

George Washington made a lot of adjustments after the first quarter. The team threw a completely new style at the Bobcats, and it paid off.

The Colonials got a few players in off the bench and used 10 total throughout the game, which allowed a fresh feel to the game for them. They pushed the offense through redshirt freshman guard Tori Hyduke, who finished with a game-high 22 points and was 4-of-6 from 3-point land. The half ended with the Bobcats only leading 39-38, despite being up by double digits on multiple occasions.

“I loved our first quarter, loved our compete,” Quinnipiac head coach Tricia Fabbri said. “We forced them to do something down their playlist with their lack of size. . . and I think our mixing kept them off balance, and Hyduke, again, had six in the second half. The ladies out put a compete today that was fantastic and gave us a chance to win against a skilled team.”

We saw a complete shift of the tides during the third quarter.

The Colonials came out on fire and picked up right where they left off in the second. The Bobcats, on the other hand, had a very stagnant feel to their third quarter, which resulted in just eight points in the entire frame.

“We have to continue to communicate,” Edwards said. “I liked our effort and our energy, I just think after the half everyone’s mental was off … it took us a while to get back into the game and get back into game mode.”

Playing a complete 40-minute game is something that Fabbri has stressed all season, especially for an up-and-coming, young team. The Bobcats looked like a different team in the fourth quarter when they were down double digit points periodically. A late surge came from the Bobcats with just six minutes left made it a six-point game after a clutch 3 from Edwards.

The Colonials saw the shift in momentum and didn’t flinch, making it a 72-60 game with 2:22 remaining. The Bobcats did not have their way with Hyduke, who made a couple clutch 3s at the end to add to her total for the game. The Colonials held on, knocking down foul shot after foul shot to close the game out. They finished the game shooting 17-of-27 from the charity stripe.

“You can’t be disc looking at the 1-5 record number,” Fabbri said. “I think it’s about embracing it and seeing the good through it, understanding that you’re really hungry, and it keeps you motivated moving forward.”

The Bobcats will remain motivated as they will have 10 days off, but then hop on a flight to Orlando, Florida. They will be traveling to face off against the Central Florida Knights on Dec. 17, at 7 p.m.