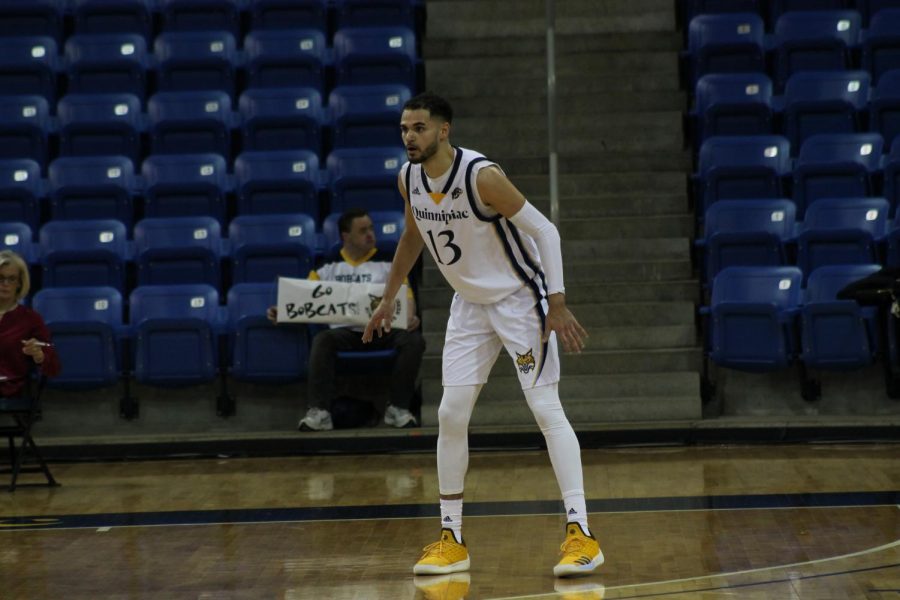 On Oct. 13, 2014, a four-star recruit committed to the Northwestern men’s basketball team.

Aaron Falzon, an 18-year-old at the time, was ranked 75th in the ESPN Top 100 — a list that ranks the best high school basketball players in each graduating class. He became the second player in the ESPN Top 100 to commit to Northwestern, according to ESPN.

Fast forward to 2019 and Falzon, now 23, is a graduate student forward starting for the Quinnipiac men’s basketball team.

“I wanted to go to school and get the best education possible, go to the most prestigious academic school, but also get that big time basketball,” Falzon said. “So for me, it came down to Northwestern and ultimately got to play in the Big Ten. It was a great experience.

“But going into my fifth year, I really wanted to make it about a basketball decision, (go) somewhere I can kind of expand my game and become a better basketball player and show people what I can do in my fifth year ’cause I haven’t been able to show. Unfortunately, the last four years, I’ve been hurt a lot.”

Falzon hasn’t been able to show his on-court abilities due to injuries. That was different before college, though.

The 6-foot-8 forward went to Northfield Mount Hermon — a boarding school in Gill, Massachusetts. He led the team with 17.7 points per game (PPG) in his senior season, according to MaxPreps.

Falzon is at his best when shooting 3-pointers, and his high school built a system around that. The team mostly shot 3-pointers and layups, rarely taking mid-range jumpers or isolation, dribble pull-ups.

Even with an offense optimized for the team captain, Falzon used most of his free time to work on his game, despite a busy schedule at school.

“You have a certain number of classes, you usually have a free period, which is like an hour or so of time to catch up on homework or go to sleep or do whatever you want to do,” said AJ Brodeur, Falzon’s high school teammate and senior forward at the University of Pennsylvania. “He would always use that time to be lifting or to get extra shots up in the gym.”

The “gym rat” that Brodeur described was a leader and offensive catalyst for that Northfield Mount Hermon team.

“We were struggling in league play,” Brodeur said. “Then we had the longest road trip of the year. We drove from central Massachusetts up to like Northern Maine. It’s a five-hour, six-hour bus ride.

“We knew we were gonna need a big game that day. It was against (Bridgton Academy, which is) all postgraduate, so they’re all mature players, guys who play well together. (Falzon) came out that day, and he dropped 45 points, which was at the time, the record for single-game scoring.”

Falzon’s 45-point game not only helped the team win but was also a highlight of an illustrious senior year recognized with the NEPSAC Class AAA Player of the Year award and a first-team all-league selection.

He finished his high school career with 1,078 points but lost the single-game scoring record a few years after his graduation.

These accomplishments led to scholarship offers from multiple teams such as Boston College, Georgia, Notre Dame and Northwestern.

In his freshman season at Northwestern, Falzon played in all 32 games and started 29 of them. He averaged 8.4 PPG on 35.4% from the 3-point line. He knocked down 63 3-pointers — the second most by a Northwestern freshman in history, only trailing Sean Wink who hit 86 in 1997-98.

Then the injuries came into play.

“It was a great experience freshman year,” Falzon said. “I got to play a lot, some shots went down, so definitely gave me a lot of confidence and then getting hurt kind of took away from some of that.”

Prior to his sophomore season, Falzon suffered a knee injury. He played just three games that season before opting to get season-ending surgery.

After redshirting his sophomore year, Falzon came into the 2017-18 season with the same knee issue in addition to hip and back injuries, according to InsideNU.

Falzon played 28 games and started 10, but his minutes decreased from 24.5 per game in his freshman season to 16.0 per game in his redshirt sophomore season. Additionally, his scoring fell to 5.5 PPG.

Injuries spilled into his redshirt junior season as well. The forward made his season debut on Dec. 17, 2017, after sitting out the first few weeks with an ankle injury. In his previous season, he struggled to find his footing. His PPG average dipped to 3.9 while starting just four of the 17 games he played.

Going from ranked 75th in the nation to 3.9 PPG as a redshirt junior is not the storyline Falzon had hoped for. He knew choosing Quinnipiac would give him the opportunity to showcase his talent, barring any more injuries.

Even with the potential positives at Quinnipiac, Falzon still had to leave his school, team, coaches and teammates that he had been with for four years.

“They were really supportive of what I wanted to do, and they understood that I wanted to play a little bit more, and I wanted a different experience,” Falzon said.

He later graduated from Northwestern and announced his decision to join the Bobcats in May 2019.

“With all the transfers going on, kids decommitting from different schools, it’s part of the landscape now,” Quinnipiac head coach Baker Dunleavy said. “As a coaching staff, you got to keep your flexibility.

After spending four years with Northwestern, it took some time for Falzon to adjust to Dunleavy’s system. In his first two games, he shot 1-of-10 from behind the 3-point line.

“He’s gonna be fine,” Quinnipiac junior forward Jacob Rigoni said after Falzon’s first two games. “He’s new to this system, and I think just playing with different guys is a different feel to him. You just got to focus on defense, and we all know he’s a really good shooter.

“He’s got to trust in that, that that’s what he does well so feel free to take his shots and just keep playing his role in the offense. Focus on defense, and you’ll have a clear mind offensively to do your thing. We got his back, and we’re confident.”

Through his first five games of the season, Falzon has begun to find his footing with the Bobcats. He’s started in every contest and is playing 27.4 minutes per game and averaging 7.8 PPG.

“(Playing for Quinnipiac has been) an adjustment for me,” Falzon said. “It’s like starting all over and kind of being a freshman again.”

Surely, it’s not the road that Falzon expected in his senior year of high school, but it’s still a road, and he’s back on it.

“I wouldn’t say I’m fortunate to get bad injuries, but the injuries kind of gave me perspective on life,” Falzon said. “I’m kind of thankful for the obstacles that I had to go through in life.”