The new “big man” on campus 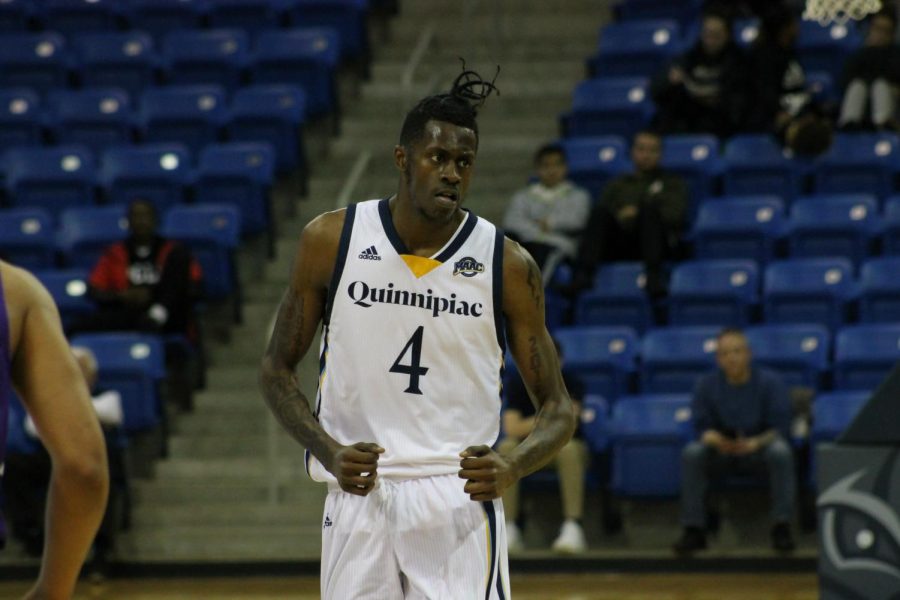 To be the big man on campus, one must have a high level of popularity on campus. Seth Pinkney has that reputation because he’s quite literally the “big man” on campus.

Pinkney, a 7-foot-1 center from Warminster, Pennsylvania, is the tallest athlete in Quinnipiac University history.

Beyond his height, Pinkney also provides a whole new dimension that Quinnipiac has not had — a 7-footer in the paint. As the team has hoped, he’s has been able to give Quinnipiac a new sense of depth and length to its lineup.

When asked about what role he thinks he’ll settle into, Pinkney clearly had a focus on the defensive side of the ball.

“I feel like that’s a strong suit for me,” Pinkney said. “And I feel like building off of blocking shots and getting stronger obviously in the weight room with coach, and just doing whatever I can, getting rebounds, blocking shots … eventually my offensive game is going to come.”

Pinkney has been thrown right into action in the first few games, giving him a role off the bench right off the bat, which proves he has upside despite inexperience. He played some stout competition against Miami — his second game at Quinnipiac. That meant a lot to Pinkney in his young but promising collegiate career.

“It was pretty tough, but Miami was actually one of my dream schools,” said Pinkney. “It was actually really big for me to play against them, so I feel like I had a lot more energy.”

That energy was felt in the first couple games, when Pinkney was able to give a spark off the bench with a couple late, clutch blocks vs Brown, and some see that as a by-product of switching up the defense to zone.

“Seth and (redshirt junior forward Kevin Marfo) create a great advantage for us at the rim,” Quinnipiac head coach Baker Dunleavy said. “Part of the reason we’re playing a little bit of zone is to use them to their strengths.”

Pinkney came up with some key blocks towards the end of the 70-68 loss to Brown to go along with eight points and four rebounds.

No. 4 seems to be extremely comfortable in his role, and that may be because he chose to put himself in this situation. He has reunited himself with former high school teammate and close friend, Bobcats sophomore guard Tyree Pickron.

Instead of going to college like Pickron, Pinkney took a post-graduate year at a school that has bred NBA talents such as Ben Simmons, D’Angelo Russel, Joel Embiid, R.J. Barrett and Luc Mbah a Moute. While Pinkney didn’t play with these famous alumni, he learned and trained with the same high-level staff.

However, that didn’t stop the friends from playing basketball together once again, this time at the DI level in the MAAC.

“I told (Tyree) he was one of the reasons I came here, that’s like my best friend,” Pinkney said. “That time at Montverde kind of gave me a little time to be by myself and figure out what I need to do but being reunited with him just gave me a more comfortable feeling being here, so I had someone I knew inside who told me what I needed to do when I got here.”

Pinkney made it clear throughout his recruiting process that having a strong connection to his team was most valuable to him and noted that he was nervous about going to a school where he wasn’t connected to the team and wouldn’t have people helping him along the way.

“I felt like here they already knew what they needed me to do,” Pinkney said. “They had it all planned it out rather than going to a school where they don’t, then who knows what happens?”

Part of that connection also had to do with Pickron having experience in the program, since Pinkney now has someone who can show him the ropes and potentially be a mentor.

Quinnipiac men’s basketball has welcomed someone into a new role for the Bobcats, and despite the ambiguity of how it may work out, it is extremely positive that this is a bond between a coach and a player that is all about development.

“Learning as much as I can from these coaches is important,” Pinkney said. “Grasping anything that I can get that can bring me to the next level to allow me to impact the team in a big way is all that matters.”

The new “big man” on campus has plenty of time to develop and progress both on the court and in the weight room as a freshman. It will be interesting to see how Dunleavy plays the 7-footer over the next four years as Pinkney continues to develop his game to potentially become one of the most influential big men in the MAAC.