An empty room full of ideas 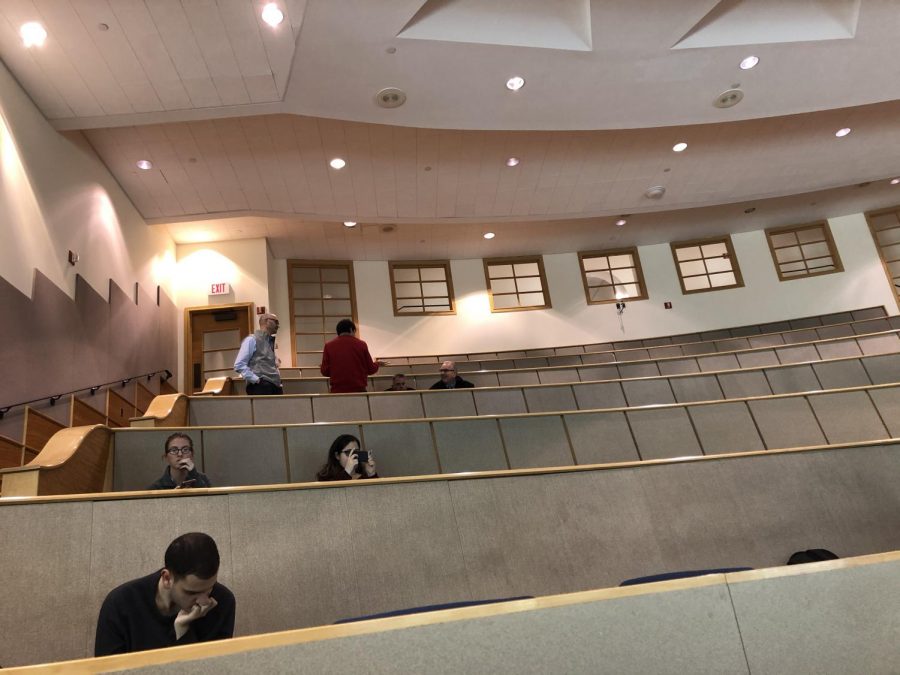 An empty room full of ideasStudent attendance maxed out at 23 — a low number compared to the number of problems and ideas that attendees brought to the table at the student town hall on Dec. 3.

Not including Student Government Association (SGA) members and student reporters, the Mt. Carmel Auditorium was mostly empty, but administrators across campus showed up in droves to answer any questions students might have had.

“I think (the low attendance is) largely due to the fact that the student body is very apathetic about issues that clearly affect them in a way bigger than food, for example,” said Austin Calvo, SGA president.

Calvo pointed out that the town hall hosted by QU Dining had over 100 attendees.

The students that did attend asked questions President Judy Olian and other leaders about stink bugs in residence halls, availability for appointments at the health center, the safety of the Commons bridge and how these town halls would ever translate into tangible changes.

Students were able to ask questions in-person using one of the microphones in the aisles or by submitting an anonymous question virtually, that Chief of Staff Bethany Zemba would read aloud. The town hall was live-streamed to the North Haven campus, where students were also submitting questions.

The first question, though, came from Calvo. As a senior, he wanted to know how a five-year strategic plan, like the one Olian has designed, was going to benefit him. He asked what changes were being made that would affect him in the here and now.

Olian answered by saying that this year, many new faculty members and advisers were hired, freshman residence halls are being renovated and club sports are up and running.

Calvo said he’d like to see more drastic changes than these before he leaves, but he understands that change takes time.

“I feel like a lot of what is happening now is just to hold us over until a lot of the stuff in the strategic plan can be realized, but I think it’s kind of the only thing the university can do,” Calvo said.

Several students had questions about issues they are facing in the present.

Freshman business major Grant Camrie asked why it takes so long to get an appointment at the health center.

“I had actually waited two hours and I think four minutes to get into my appointment and by then I was missing classes, and I didn’t feel so good,” Camrie said.

Dean of Students Monique Drucker said the wait is an inevitable consequence of a health center too small for the student body.

“There is a wait, I wish I could do something about that but we are working steadily to increase those services, but there is also a space concern,” Drucker said. “We don’t even have other opportunities in that building for additional exam rooms.”

Drucker reminded the audience about the plans for the new health and wellness center cited in the strategic plan, but suggested in the meantime, students try using the York Hill health center.

“Sometimes you can get an appointment up there,” Drucker said. “You would have to take the shuttle if you don’t have a car. They don’t always think about that if they don’t live up there but know that that is always a resource for you.”

Sophomore occupational therapy major Victoria Toole raised another concern about the health center. She said she has chiropractor appointments once or twice a week. She uses the health center’s ride system to get there, but is often left stranded and without a way to communicate with the driver to get a ride back to campus.

“There have been times I have been stranded there waiting for the ride to pick me up,” Toole said. “The health center doesn’t answer my calls. I’ve actually had to call Public Safety to get in touch with the health center.”

Drucker said that the rides are run by students and sometimes the delays are caused by the fact that the student isn’t available, so they have to pull physicians and other staff in the health center to do the rides. Drucker couldn’t explain, however, why no one was communicating with Toole.

“We’re seeing patients every 15 minutes, but we absolutely should be making sure we are getting the calls,” Drucker said.

Andrew DePass, chair of the Multicultural Student Leadership Council, asked about Quinnipiac’s “culture of silence” when it comes to matters regarding race, inside the classroom and in the community.

He mentioned the police-involved shooting in New Haven in April when a Hamden police officer and a Yale University officer fired at a car, seriously injuring a passenger, who was black, which the university did not put out a statement about.

“That could have easily been a student of color,” DePass said.

Olian responded to DePass’ concerns by saying that his vision for a more inclusive and responsive Quinnipiac is one of her priorities, but she said many of these issues are societal. She agreed that the problems cannot be solved with silence.

“I dream to be in a society where race is a gift and a plus and something that everyone rallies behind as a source of strength,” Olian said. “That nobody suffers in the act of unkindness. I aspire to have that be part of who we are at Quinnipiac.”

Don Sawyer, vice president for equity and inclusion, said Quinnipiac will be conducting a cultural audit to gauge culture relations on campus and a climate survey to identify areas that it can improve.

A question from an anonymous student submitted online asked Olian what was cut as a result of  the $3.2 million budget cuts announced earlier this semester and how the cuts affected students.

She said she worked with the deans and vice presidents across campus to prioritize what should be cut.

“That was not a decision that was made by any one person or central group deciding these are the priorities, you will cut your budget in the following ways,” Brown said.

Brown said the administration worked hard to make the cuts as “invisible” as possible to the student body. She said some professors may have had travel budgets cut, but Olian pointed out the university has hired new faculty and advisers this year despite the cuts.

Some students weren’t looking for big, structural changes to Quinnipiac. They just wanted the bugs out of their rooms and to walk down the Commons bridge without slipping. In many cases, these were concerns that administration had never heard of before.

“This week I think I have picked up six kids from falling on Commons bridge so if there is anything you can do to maintain grip or maybe at guard rails,” Camrie said. “I know it’s a beautiful bridge and it’s got lovely aesthetics but it seems to be a little more trouble than the aesthetics.”

Sal Filardi, vice president of facilities, said he’s never heard of the problems with the bridge.

“I’ll make sure someone looks at it this afternoon and we will see what we can do,” Filardi said.

Toole returned to the microphone to complain about an infestation of her dorm room in New Village with stink bugs that she said has yet to be resolved. She has reached out to facilities, her Residential Assistant (RA) and even Public Safety, but said she has been passed from person to person without ever getting a solution to the stinky situation.

“We were getting shuffled around,” Toole said. “We’d go to Public Safety, they didn’t have anything else to do. We got told to call RAs which I don’t think they would do much anyway and so we were told to get in touch with a RHD (Residence Hall Director) and nothing came upon that either to the point where we would find a Public Safety officer walking around and we would ask them for advice.”

Filardi said that the correct thing to do in this situation is to call facilities, and he wasn’t sure why the problem wasn’t resolved.

“I am kind of at a loss for the story because it went on for so long and I’m not really sure why it wasn’t addressed,” Filardi said. “The right thing to do is to call facilities because we have a relationship with exterminators.”

The purpose of town halls

The discussion closed with a final question submitted online.

“These town halls are a great first step,” Zemba said as she read the question from her iPad. “However, there is frustration on this campus that while the administration is listening to our concerns, they are not actively hearing them or addressing them. Are there more ways to create better lines of communication and understanding to help with retention?”

Calvo jumped in to answer the question, saying that talking to members of SGA is a great way to communicate concerns with a group of students who talk regularly with administration.

“All of the people in this room are here to support us, that’s why they’re here,” Calvo said. “It’s why they went to school, it’s why they got these jobs.”

Sawyer also noted that he and other administrators are taking careful notes on concerns raised at the town halls. They will be releasing a form to the student body to show what concerns have been brought up and what is being done to address them.

“SGA, I am willing to work with you on this,” Sawyer said. “To get out there and ask and see what we can do to work with students to understand that their voices are powerful and when we have the opportunity, these concerns will be addressed.”